We’re going to exam steal third tips which will add this additional weapon to your offensive arsenal.

I’d venture to say if your polled average baseball fans on which base is the easiest to steal, 98% would rank stealing second base as the easiest. The reasoning is sound due to the longer throw of the catcher, the distance middle infielders must move, the increased chance on an errant throw, and… that’s the base you usually see major league players attempt to steal.

However, it may surprise you to learn third base may be the easiest base to steal, if you know what you’re doing and I’m going to teach you what to do.

There is only 1 number one rule in base stealing … You steal off the Pitcher! Pitchers who are slow to the plate, predictable in their moves, predictable timing or who are left handed pitchers are your first indicator you should be analyzing stealing third base. 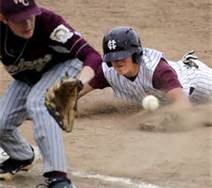 Rule 2 is timing is everything. Granted foot speed, technique and other variables enter into the equation, but timing is paramount. Leave too early and you’re picked off, leave too late and you’re thrown out.

An example of a predictable pitcher is one who checks on the runner at second base a predictable number of times, then pauses as he checks the catcher’s signs or re-focuses before he delivers the pitch.

There are 2 keys the pitcher will offer the runner which he must pick up on.

(1.) The first key is when the pitcher turns his head, or eyes, back towards the plate. The runner should increase his lead off at this point by using small shuffle steps.

(2.) Key two is the length of time the pitcher hesitates before pitching the ball. When it is a discernable, easy to read, the runner should increase his lead again.

Reading and reacting to these two keys allows the base runner an increased lead and allows for the verification and development of timing the steal attempt.

The runner has an advantage when stealing third base off a left-handed pitcher vs. a right handed pitcher if he knows how to exploit it.

There is a natural Blind Spot created between the pitcher and the runner which the runner must identify as he takes his walking secondary lead. Most pitchers at this point will not attempt to locate the runner, but rather will concentrate on the target and getting the batter out.

Steal Third Tips - Bad Timing Means Out At First Too

The runner keys off the turning of the head and the pause, as described above, without hesitation moves to the blind spot, then drives towards third base upon movement of the pitcher towards home plate.

Slow to the Plate:

Historically Pitchers who are slow to the plate are those with high leg kicks and rarely work on their “keeping runners close” pitching skills. Although these types are pitchers are traditionally easier to steal off of, at times unintentionally they create problems of timing because of their erratic windups or inconsistent pitching mechanics. Timing is imperative in stealing and sometimes this can difficult to obtain from a pitcher who doesn’t know what he’s going to do next.

Tip one is recognizing predictable tendencies in a pitcher. Key on the head and length of pause before pitching.

Tip Two is finding the blind spot you must reach on a left-handed pitcher.

Tip three is capitalizing on a pitcher who is slow to the plate. 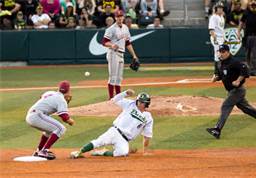 1. Movement and timing are key in stealing bases and if you realize either are not quite right, abort the steal attempt immediately. The “Steal Sign” does not obligate you to steal. The coach signaled you to give your best effort in an attempt to steal the base, and recognizing you can’t give it your best effort, you’re expected to abort the attempt.

2. All base running movements must be small, quiet and subtle in order to not draw the attention of the defense. Quick or sudden movements raise immediate red flags therefore, using three slide steps to move 8 feet are more deceiving than 2 large or 4 fast steps.

3. Try to pick up the catcher’s signals. An inexperienced catcher may not hide the signs well or forget indicators, and knowing a breaking ball is the next pitch offers you a huge advantage. Even if you’re not contemplating a steal attempt you are more aware of looking for a ball in the dirt.

4. Check out the pitcher’s hands. Some pitchers are not very good at hiding their grip and seeing a curveball grip gives you a huge advantage when stealing.

5. Believe it or not, the best time to attempt a steal of third base is with one out and a right handed batter at the plate.

6. As with All base stealing, but especially for stealing third, keeping the feet moving, maintaining balance and excellent timing are the keys to success. An element of surprise and luck doesn’t hurt either.