Learning to coach baseball and travel the path from Good to Super Star Catcher is not a long trip, Time wise, but at times it can be an incredibly difficult training period if the player doesn’t know exactly what he’s attempting to learn or the coach doesn’t know what or how to teach it.

We’re going to eliminate this problem for both parties and explain, in detail, the skills and how to learn them, required to become a super star catcher.

When baseball scouts evaluate a potential prospect for the catcher position, they always want the catcher to possess, or show potential to easily reach the benchmark of 2.0 seconds, throwing the baseball from receiving the ball at home plate to the second base infielder’s glove.

An exceptional prospect, who shaves that time to 1.8 seconds, is nearly always invited to a professional tryout. I don’t know about you, but I have trouble wrapping my mind around .2 of a second making the difference of a possible major league career and not even being looked at again.

However, when you consider Olympic track sprinters, whose victory is measured in .001 of a second, it becomes more understandable. Can you imagine training your entire life, thousands of hours of practice, to lose by .001 seconds. You literally can’t blink your eye that fast.

Since this fraction of a second between making it or not is so important, how do we coach baseball in order to reduce the time it takes for the catcher to receive the pitch and put the ball on second base?

What Not To Do and Coach Baseball

First instinct and simple logic tells us we need to somehow catch the ball as soon as possible, so cheating a little bit by reaching forward with my mitt as the ball approaches, would allow me to catch the ball 12” to 18” sooner, thus be able to throw the ball sooner.

Get the ball quicker … throw the ball quicker. Shave the time. So I’d reach forward with my mitt to receive the ball 12” - 18” sooner than I would normally and by doing that I’m leaning forward ready to throw sooner.

"Don't Extend the Arm Too Far"

Hey, this ain’t so hard. What’s the fuss? The fuss is you are Wrong in your assumption, as you have actually increased your time from 2.0 to 2.1 seconds. How can that be?

Enough guessing here. Let’s get down to the brass tacks and using the 2.0 seconds as our baseline, see what’s actually happening.

(1.) As we see the runner stealing, we move our arm and mitt forward from the body to receive the ball sooner than normal, additionally beginning our body moving forward, which theoretically should hasten our step and throw.

(3.) Now we must bring the ball back to our throwing hand in order to grip the ball, which with our arm extended further than normal, increases time to perform this move.

(4.) Should I bring my bare hand forward in order to grip the ball sooner, compensating for my arm being extended, I’ll be gripping the ball further out than normal, which will increase the time it takes to bring the ball to our ear and throw. 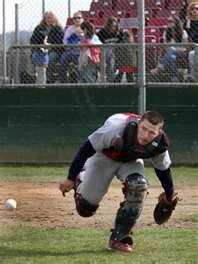 Adding these two elements to the equation we have actually increased our time from 2.0 to 2.1 seconds and here’s why.

It all hinges on the time it takes to travel that 12 - 18”. You thought by reaching forward to catch the ball 12” to 18” sooner you’d reduce time, but in reality it takes you longer to extend your arm 12” - 18” than it does for a 90 mph fastball to travel the same distance.

(1.) In other words had you received the ball closer to the body, the ball would have hit your mitt sooner than reaching it forward. Only as split second, but right now we’re dealing in split seconds.

(2.) Additionally, instead of immediately transferring the ball from the mitt to the grip, you must bring your mitt back to your throwing hand in order to grip it. Again, split second difference.

Each step is a split second difference, but add them up and you’ve lost your chance for Cooperstown.

The bottom line, in case I lost you. Don’t reach for the ball …let it come to you. You’re not a first baseman …you’re a catcher with entirely different responsibilities and methods to achieve them.

If you’ve looked at the many tips and information included in the Learn-Youth-Baseball-Coaching site, and I hope you have and will continue, you may be amazed at all the information and instruction available. Which is of course…Great.

However, the flip side of that coin is there is so much to learn, it can be intimidating and flat out overwhelming. So we’re going to adhere to the age old philosophy, I’m sure someone smart and famous quoted, “How Do You Eat an Elephant? One bite at a time.” 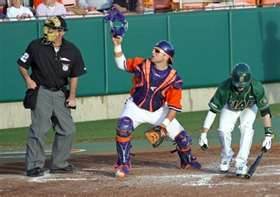 "Getting Rid Of the Mask"

Doesn’t matter how much you practice or how good you are, you will eventually experience having a pitch get by you. The important thing is how do you react to the situation in order to limit any damage.

Let’s learn how, as a Catcher, to retrieve a passed ball with a runner on third.

(1.) The very first thing a catcher must do in tracking down a passed ball is to get rid of the mask. Assuming a right handed catcher, remove the mask from your head and throw it away towards the first base side of the plate.

(2.) Being right handed, there is a nature tendency to always turn to the left when going after a passed ball, but you must learn to overcome that natural instinct and turn the direction in which the ball got passed you. .........Coach Baseball

"Do Something With It"

(4.) Don’t hesitate looking for the ball, locate the ball as you run backwards.

(5.) After locating the ball, as you approach it, begin to slide on your knees until reaching the ball, then come to a single leg kneeling position (right knee up), grab the baseball with your throwing hand and throw sidearm to the pitcher, who should be covering home plate......Coach Baseball

This can be a tricky maneuver until you practice it, so let’s review the steps.

Step 1 - You get rid of your mask, so it doesn’t hinder your view of the baseball field, by throwing it up the first base line, which will eliminate any chance of it causing a tripping hazard or any other hindrance to you or especially the pitcher.

Step 2 - You turn the direction the ball got passed you on. The baseball will normally skip or slide along the backstop the direction it hits, so in other words, if the ball passes on your right, the ball will hit the backstop and careen to the right. Opposite if it passes on the other side and by turning the proper direction you have the shortest direct path to the ball, which of course means quickest path.

You’re low in throwing position the second you grab the ball. Always try to grab the ball bare handed, but if you must, pick it up with both hands and grasp it inside the mitt as you raise your hands.

Being a catcher and needing to throw high velocity and accurate balls to any base, but especially second base, the type of grip you take on the baseball is very important, and should always be a 4 seam grip. Why?

Anytime you throw the baseball with any intensity and especially in an over hand motion, the ball will have a tendency to sail in whatever direction the seams dictate.

By grabbing the baseball across 4 seams the ball will not sail, but instead will be forced to sink, which is exactly what you want when throwing to a specific target.......Coach Baseball

A throw to second base which is not as accurate as intended, will in a worse case scenario, bounce in front of the fielder allowing him the chance to block the ball, keeping it in the infield and preventing the runner from advancing another base.