When you mention catcher protection at Play at Plate, most people automatically think mask, shin guards, etc, but they seldom consider the collisions at home plate which can be quite violent, but legal hard nosed baseball, allows for physical contact at home plate between the runner, attempting to score, and the fielder, attempting to prevent the run from scoring.

Luckily, these collisions are rather rare and if trained properly, the catcher can reduce his chance of injury significantly, and that’s exactly what we’re going to learn. How a catcher and his team can help avoid injury.

The degree of danger a catcher is exposed to greatly depends on which outfield position the throw to the plate originates, because it will determine to the greater extent, in the way the catcher sets up his defensive position.

Throws originating from left and left center field afford the catcher the ability of being able to see the ball and the approaching runner.

Throws from right and right center field pretty well leaves the catcher blindsided, as he hardly has time to check on the runner’s position, who is quickly closing on him, then turn back and pick up the ball again before a collision occurs.

This is where the pitcher becomes very important in the protection of his team mate. The pitcher’s responsibility is to be backing up the play, which has him positioned behind the catcher, directly in line with the approaching throw and has a full view of the runner and the track of the ball.

It’s his job to Always verbally instruct the catcher what’s happening as the catcher awaits the throw, and that includes everything from he’s not coming to he’s 20 feet away, whatever is helpful to the Catcher anticipating a blind side collision.

I personally instruct my catchers to always keep their mask on during this play as it’s protective equipment and I want every bit of protection my player can be afforded. 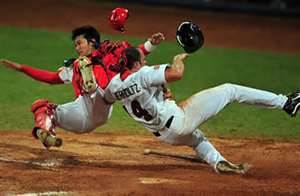 There are coaches who argue removing the mask increases the catcher’s visibility, both looking at the throw and peripheral vision of the approaching runner, which increases the player’s safety as well as enhancing the chance of the put out.

It’s your decision as a coach of which method you choose to teach as both are correct in their individual terms and as I said from the beginning, I’ll always give you other coaches’ opinions and tactics where possible.

But...on the Catcher Blocking the plate play ...I encourage you to use my method.

The catcher should position himself at the third base front corner of home plate, placing himself between the runner and the plate, with his right heel making contact with the corner tip so he knows exactly where the plate is without having to look. 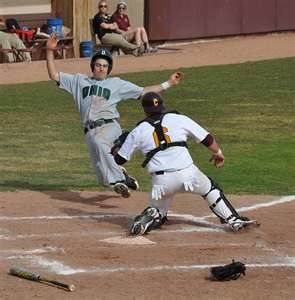 Teach and remind your catchers they are not playing football and they don’t need to stop the runner dead in his tracks as if preventing a touchdown. When the runner collides into him don’t resist the impact, instead roll backwards or sideways, whatever the case may be, in order to redirect the energy of the impact, which limits the force of the impact on the catcher. As long as he maintains possession of the ball the umpire will call the runner out and the chance of injury decreases immensely. 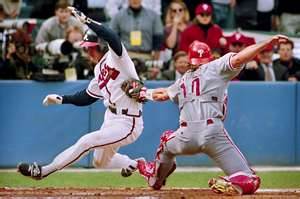 As the catcher receives the ball and prepares to make a tag, Always use two hands if possible, as it makes it harder for the runner to dislodge the ball from the mitt if you have the ball secured with your bare hand also.

Once the catcher has the ball secured, he is to turn his body toward the oncoming runner, extending his left leg outward, which blocks the runner from sliding around the catcher and just as importantly, automatically forces the catcher into a lower position, where he should lower his left shoulder and prepare for impact with the base runner.

Should the throw be off target and is up the third base line, this totally changes everything as the catcher must now move to the ball vacating home plate and giving up his defensive position.

Forced from a set position the catcher must now improvise according to the situation. After catching the ball he must immediately swing his mitt hand only, around in a swipe tag. If possible tag as low as you physically can in case the runner is sliding, and if he isn’t sliding a tag on the thigh is just as much an out as a tag on the shoulder. 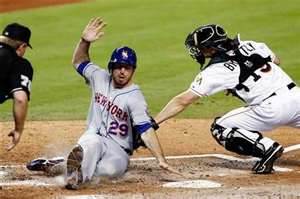 The same rules apply for a throw off line to your right, the first base side. The catcher must go to the ball and attempt to retreat back to home plate before the runner gets there. In this case the catcher will attempt to make the tag two handed because odds of a collision occurring are greatly increased.

Most little leagues require a runner to slide when there’s a play at the plate in an attempt to prevent injuries, but the play is a natural part of the game, and if your catcher is well coached, the risks of injury are greatly reduced.

Play at Plate to Baseball Catcher