I have taught the baseball catcher position, but you actually need a full time Catcher's coach because it is possibly the most difficult position to master due to the shear volume of physical and mental skills to learn. We’re going to put our training on Slow Motion  and begin learning our catcher skills at the Beginning … The Stance.

With bases empty and less than two strikes on the batter, a catcher will use what’s known as a  relaxed stance to catch.

a.) The relaxed stance begins by placing your feet @ shoulder-width apart and squatting on your haunches, with your hips and shoulders being square to the pitcher.

(b.) Your feet, should also be square to the pitcher or slightly staggered, verify this by looking down at your toes, they should be should be straight across ( parallel ) the front edge of home plate. Once you become familiar with the stance you’ll assume it naturally and automatically know when to adjust. 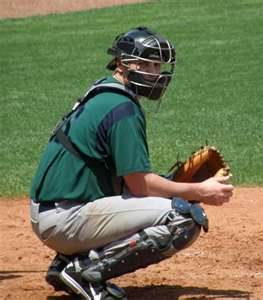 (c.) From this squatting position your weight should be evenly distributed over your hips and slightly on the instep of the balls of your feet. It’s imperative you feel comfortable and especially  Balanced  or else you will be unable to perform any other duties.

You should Never be leaning or feeling as if you’re going to fall over, whether forward, backwards or sideways and it should actually be difficult for someone to knock you over with a mere push.

Get as low as comfortably possible for two main reasons, one is to allow the umpire the clearest line of sight possible to call pitches, and secondly, for the most part you want your pitcher to throw low in the strike zone as opposed to belt high.

Setting Up Your Arm Position:  and Baseball Catcher Position

(a.) Your receiving arm, the mitt hand, should be between bent and totally straight with your palm, mitt face, pointed directly at the pitcher.

(b.) Do Not extend your receiving arm straight out, as this not only makes catching the ball difficult, but batter may hit your mitt with the bat as he swings, which is called Catcher’s Interference, and he’ll be awarded first base, which will not endear you to your pitcher, especially if that happened to be a strike three, swing and miss.

(c.) Do Not over bend your arm, which would result in your mitt being too close to your chest, slowing your reaction and mobility to move your mitt in order to catch off target pitches, and possibly most important ... It will also prevent you from being able to frame a pitch.

(d.) Your elbow should be held below and angled to your mitt, which will allow you to frame pitches which are low and inside, because your glove can be moved to the location with only minimum movement of your forearm, making the pitch appear to have hit exactly where you set up.

Catchers should always use the Ready Stance when there are runners on base or the batter has a two strike count. The reason for this is quite simple, you need to be ready to throw a base runner out should they attempt to steal and/or be in position to block a wild pitch which was a third strike swing and miss in order to throw the batter out at first base. 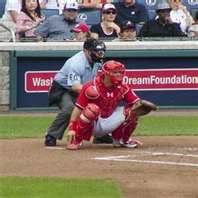 (a.) Although you want to be slightly raised, be aware to not become too erect by straightening your upper body while being in the ready position, because you could block the umpire’s view of the plate.  Baseball Catcher Position

Your butt should rise a few inches higher, but your upper body should lean slightly forward, not slightly higher.

*** All umpires are instructed to call a pitch a Ball if they are blocked from seeing it cross the plate. Help your pitcher.***

It’s a natural tendency to want to fudge a bit and some coaches teach their catchers to stagger their feet more than a couple of inches apart when there are runners on base in order to quicken the throw to second base.

However, this very well may be a Bad idea.

(1.) If your body is too far off square to the pitcher, your hips and shoulders will be turned away from the pitcher and you’ll have a very difficult time bringing your body back to square and dropping into the proper position to block a pitch in the dirt.

For instance, a pitch in the dirt directly in front of the plate, a 55’ curve ball for example, which bounces to either side of the catcher, especially the left side for a right-hander, it can become impossible to regain squaring your body and dropping into the proper blocking position, if your feet are staggered too much.

Possibly the most compelling argument against cheating with your footwork, whether it’s the catcher’s idea or the coaches‘, is Most bases are stolen off the pitcher … not the catcher.

Baseball Catcher Position to How to Play Baseball