How to Play Baseball - Catcher Position

When anybody asks me  “ How to Play Baseball,”  I tell them to watch a good catcher for a few innings, as he’ll demonstrate everything you’ll ever need to become a good baseball player.

“Tools of Ignorance”  has been the nick name for the catchers' protective equipment for decades, and if you’d take the time to review some of the old equipment, you would probably agree, or at least understand, why the term originated.

A player wanting to become a catcher must have certain required qualities, of which bringing some natural God given attributes to the table is non-negotiable, because some things just can’t be taught, they must be inherent. ---How to Play Baseball

He has to be a natural born scrapper, not saying he’s a fighter,but rather he has a “ Won’t Quit “ attitude. 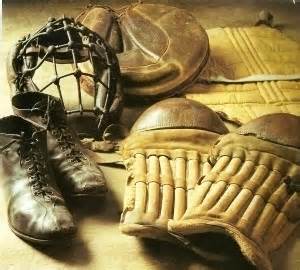 Catchers have been compared to a Junk Yard Dog, as he has to be tough enough to withstand foul balls bouncing off his mask and feet, be brave enough to be bowled over by a base runner much larger than himself, while wearing stifling protective equipment in 100 degree heat. ----How to Play Baseball

The player must have a strong and accurate throwing arm, as a major portion of a catcher’s job is to keep runners from stealing and a strong arm is a prerequisite, as has it ever occurred to anyone that the catcher throws as many or more throws than the pitcher?

Finally, he must be intelligent as he is the general of the infield, keeping the team up when they’re trailing, calms and reassures pitchers who are struggling, knows the opponents’ weaknesses when hitting and calls pitches which prey on those weak points. 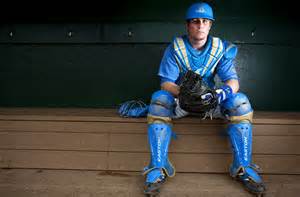 The Catching position requires the player to most likely be the most intelligent player on the field, with the responsibilities of strategy, pitch selection and location, moral and setting defenses, which is secondary only to that of the Coach.

Respect and Confidence: - How to Play Baseball

There’s only one way to earn respect … You have to earn it,  but the catcher who can earn the respect of the pitching staff, that no matter how bad the pitch, sometimes intentional, he won’t allow the ball to get by him, will be held in high esteem by his teammates.

Learning to block wild pitches, especially balls in the dirt, a 55’ curveball as they call it, is no accident, as it takes a lot of hard work and technique, which we’ll begin teaching you.

As with many other facets of baseball, the mind is the first tool to be honed as a catcher must develop a certain automatic mindset that his entire body is a tool to be used to present a solid wall which the ball will not get through or around.

The catcher Never waits to see if the ball takes a nice bounce in which he can catch it with the mitt, rather he assumes the worse and prepares for the worse.

He immediately drops from the squat position to his knees, placing his mitt on the ground in front of his crotch, blocking any ball from skirting between his knees and under the glove. By leaning slightly forward, if the ball kicks upwards from the ground, hitting him in the chest protector, it will bounce straight back out in front him, instead of skipping off to either side.----How to Play Baseball

When a ball is in the dirt to the catcher’s right, he’ll never try to backhand or swipe his mitt in an attempt to catch the ball, for that’s a sure formula for failure, but rather from the squat position, you must leap frog your entire body to the right side of the plate to where you’re facing the ball.

As you leap frog you land on your knees, glove on the ground in front of your crotch, slightly leaning forward, as this is your Proper Blocking position. 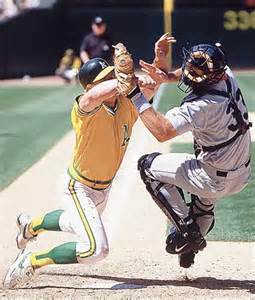 Never swipe a back hand with the mitt at a ball to your right. This is not about luck, it’s about the proper method to stop the ball. Number one you probably won’t stop the ball with a swipe and if you did make contact you’d probably slap it out of your reach allowing runners to advance.

This exact method is used in reverse for a ball to the left side of the plate.---How to Play Baseball

The Skills required to become a professional, or just play like a professional baseball catcher are enormous. After years of practice, class room instruction, being coached and playing hundreds or even thousands of baseball games, you feel you’ve just about learned it all.

You’ve been elevated to the next step in the baseball hierarchy, maybe AA ball, and you’re feeling pretty cocky, when out of the clear blue your new coach suddenly chews your butt out because you didn’t perform a particular task.

Bear in mind he’s not angry that you performed the play badly, you didn’t perform it at all! Why? You didn’t know you were suppose to. This is not as unusual of an occurrence as you may think, because there are many actions in baseball which take place Away from the ball and the action, which we don’t pay attention to. 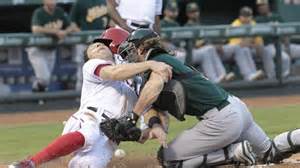 One such responsibility of the catcher is Backing Up First Base on an infield ground ball. Yep, unless you’re one of the very few astute who already know this, you heard me right. Let’s examine this additional duty.

Anytime the bases are empty, regardless of outs, and the batter hits a ground ball to an infielder, the catcher has the responsibility to run down the first base line with the runner in order to back up the play at first base in case of an over or a wide throw.---How to Play Baseball

In order to execute this play, as soon as the batter makes contact with ball your first instinct, as a catcher, is to stand and begin moving towards first base. Should the ball be hit to the outfield, or a solid shot ground ball which immediately gets through the infield, you stop running, but you always assume the baseball will be caught in the infield.

When an infielder will or has fielded the ball, you continue to jog down the first base line, watching the baseball and veering out, in an arc towards the first base dugout as you proceed and the play is completed. ---How to Play Baseball

Again, the reason for this is quite simple, 99% of all baseball fields have fencing or seating, along both foul lines. Should the throw to first base be wild, or gets past the first baseman for any reason, the ball will travel to and most likely bounce off the fence.

The catcher, by trailing the runner down the first baseline, will be in position to play the rebound off the fence, which will keep the runner at first base instead of advancing to second base.

1. It’s part of your normal responsibility to always know the number of outs and if the bases are empty or not. Should there be runners on base, You Do Not execute the back up.

2. You are not required nor expected to run full speed towards first base, as that would wear you out. You jog, taking an arching direction in order to surround the rebound off the fence should one occur.

3. Don’t wait to see where the ball is hit or if it’s fielded. Just as you instinctively drop to your knees and cover up on an approaching bad pitch, you automatically take a step or two towards first base, as it’s much easier to stop short, than attempt to pick up speed in order to make up for lost distance.

How to Play Baseball to Playing Catcher