Teaching Baseball Youth Outfield and how to play outfield positions requires more than just learning how to catch fly balls, although with nightly highlight films on ESPN showing players climbing or crashing into walls while miraculously catching the ball, can’t help but leave the impression outfield equals fly balls.

However, there are just as many, if not more, ground balls hit into the outfield as fly balls, and learning how to properly field these balls is just as important, at times more important, than catching a fly ball, as we’re talking 50% of the job. 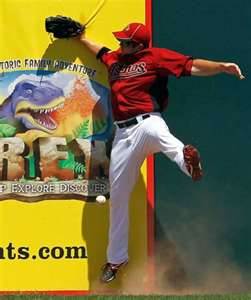 "Not All Great Attempts Result In An Out"

Let’s learn the proper methods of fielding ground balls in the outfield and what to do with the ball after you have it.

You may be surprised, If you are new to the site, but there is Normally a cardinal rule associated with every baseball skill and playing the outfield is not immune, one such rule when an outfielder fields a ground ball which should never be violated.

After fielding a ground ball, get it back into the infield immediately!

There is absolutely no reason to hold the ball in the outfield, as any action, obviously the batter just hit safely and is on the base paths, is occurring on the infield.

Throw the ball to the proper base or the cut off man, there’s no need to act irrational and unleash an errant throw, just do not hesitate any longer than necessary, as you should mentally have your actions pre-programmed. 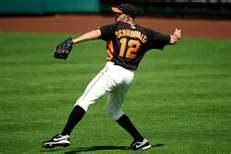 Fielding a ground ball by an outfielder follows the same principles as an infielder applies when fielding a groundball hit more or less right at them.

(1.) Always Charge the approaching ground ball, never wait for it to travel to you, and position yourself squarely in front it….

(2.) Approximately 5 to 8 feet, depending on the speed of the ball, drop to one knee, the knee on your throwing hand side, your shoulders should be square with the ball…

(3.) No different than an infielder, place your glove on the ground and watch the ball all the way into the glove.

Fielding from the knee is a basic ground ball fielding position which reduces the possibility of the ball getting past the fielder, either from a bad hop or miscalculation. 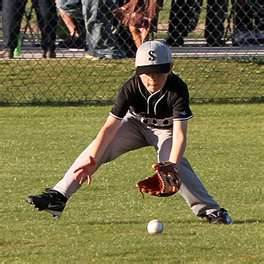 This position is identical, in theory and purpose, to the position a catcher takes when blocking a ball in the dirt. Your body provides a backstop which if the ball takes an unusual hop, which is not uncommon on most amateur outfields, the ball will bounce against your chest and land in front of you.

Fielding to Your Far Side and Baseball Youth Outfield

Not unlike chasing down a fly ball, there will times you’ll be running full speed sideways, to your left or right, chasing a ground ball which has been hit hard down the baseline or a line drive which is slicing away from you.

Obviously your first task is to track the ball down and catch it, but it’s imperative you get the baseball back into the infield as quickly as possible, to limit the advance of the runner(s).

Because you are running full speed, and most likely bent over, quickly throwing the ball back into the infield after the catch becomes a real challenge, because of your forward momentum, and forward momentum is not the only issue you’re dealing with, as the side on which you field the ball has huge implications on how to get into position to get the ball back into the infield. 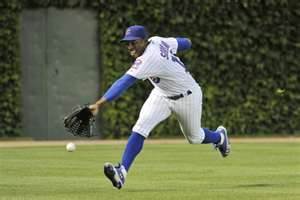 Fielding to Your Backhand and Baseball Youth Outfield

An outfielder should attempt to never field a ground ball backhanded, but instead circle the ball, that is take an angle of pursuit which allows you to approach the ball from a frontal, or at least a side position.

There of course will be plenty of times you won’t have an option, but must catch the ball backhanded. Your method of stopping your forward momentum and getting into throwing position are extremely limited in this case, so we’ll learn the best approach.

(1.) Upon fielding the ball the first thing you must do is raise the head, by raising your upper body, which slows your momentum and helps maintain balance. Get your head too far in front of your body and going to fall forward to the ground, it’s just physics.

(2.) As you’re raising your upper body, begin applying the brakes by taking quick stutter steps, like pumping the brakes of your car or bike, as you can’t attempt to immediately plant your foot in order to stop because you’re still going too fast and do not have command of your balance.

(3.) Once slowed enough plant your foot, reverse your momentum towards the infield, take a Crow Hop and throw a four seam fastball to the relay man or other proper person or location. 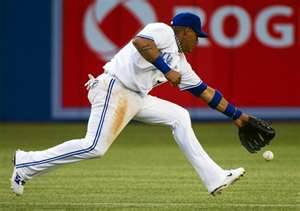 "Chasing Ball On Your Glove Side"

Why can’t you plant your foot and throw without the crow hop making getting rid of the ball quicker? You could, but the crow hop helps produce a higher velocity and more accurate throw which more than makes up for the split second it takes to perform the move.

Fielding to Your Glove Side and Baseball Youth

Fielding a ball on your glove side presents all the issues of a backhanded catch, that of being off balance and forward momentum, but there are more options for overcoming these problems.

The preferred and fastest method of performing this play, assuming you’re running at full speed, is to learn how to perform a controlled Spin, which redirects the sideways momentum into a forward momentum, allowing the fielder to throw the ball back to the infield much quicker. This is exactly the same maneuver an infielder performs when faced with too much momentum away from his target.

(1.) Upon catching the ball it’s imperative you immediately raise your upper body, raising your head and slowing your speed.

(2.) The split second you have control of your balance, plant your throwing foot, right foot - right handed, left foot - left handed, and begin to turn your body following the direction of your glove.

(3.) As you complete the spin and are now facing and moving in the direction of the infield, make the throw.

The other option is:

(2.) Quick stutter steps in order to slow your speed …

This second method is perfectly acceptable in the event you concede a double to the runner, but because he is very slow, the chances of him trying to advance to third base are extremely slim. 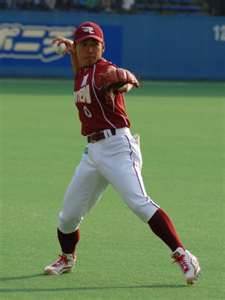 These maneuvers may appear to be very difficult to perform, and for the most part are not easy, but they are easily practiced which increases the performance ability.

(1.) Position your outfielders in whatever field you want and have them rotate performing the drill.

(2.) Hit line drives and/or ground balls to their left and right side and have them perform the physical elements required to accomplish each fielding / throwing method. Even if the fielder is not running full speed when he catches the ball, it’s important he grasp the feel of spinning and ending up facing the infield, and this can only be accomplished by doing the drill.

Sometimes the circumstances of the game, inning, score etc. will dictate how an outfielder must field a ground ball.

The importance of thinking ahead and pre-programming your actions are very important and apparent when the situation requires an outfielder to field a ground ball and immediately throw to a pre-determined specific base, in order to stop runners from advancing or throw them out as they attempt to advance.