Outfield Drills can quickly become boring and somewhat non-productive because of all the player’s idle time between turns. Let’s face it, how many times have you seen a coach, or done it yourself, have his players spread out in a line hitting fly balls to them which are either not challenging or end up being a ground ball instead of a fly ball? Don’t get me wrong, 8 or 9 year players need this type of training in order to learn how to catch fly balls, but 11 and up players require much more challenging drills. I’m going to teach you some drills, with variations, which will keep your players active and interested. 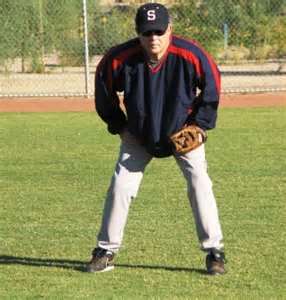 We’ve talked about the necessity of turning the correct way in order to give chase to a fly ball, but to review. We use what’s known as a Drop Step, which means if the ball is hit to our right, we step back with our right foot, pivot on the balls of the feet, then cross our left foot over our right and begin running while looking over our left shoulder.

Balls hit our left is just the reverse, stepping back and pivoting on our left foot, crossing the right leg over the left and run looking over your right shoulder.

Position the outfielder @ 15‘-20’ in front of the coach in his normal fielding stance, toes pointed forward, feet shoulder width apart;

The coach points which direction he’s going the throw the ball;

The player performs the correct drop step and begins sprinting;

The coach waits until the fielder is @ 15 - 20 yards away then throws a high fly ball which the outfielder attempts to track down and catch. 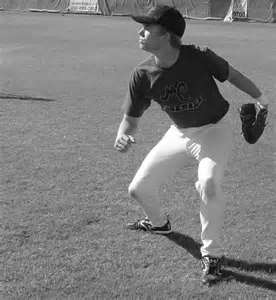 Once the players become accustomed to the drill, begin making it more challenging by throwing the ball farther over their head or away from them, forcing them to run faster.

Every now and then I’d direct the player to his right, but throw the ball to his left. This re-enforces the importance of turning the correct way, because the catch becomes so much more difficult, and offers them some experience of trying to overcome a mistake of turning the wrong way.

In order to keep the drill fast paced, have each fielder keep a baseball with them, which they’ll flip to you, immediately set-up, then perform the drill. There’s no waiting for a ball to be returned to the infield or delayed because the fielder missed it and had to give chase to retrieve it.

Once the players become confident with the Turn Drill and using the cross over step, add another twist to the drill in order to make it more challenging yet.

Your outfielders will continue to position themselves exactly as they have been.

Position 3 players, @ 10’-15’ away to your right, left and 1 slightly behind you. These players will become the Cut-Off or Relay Man who the outfielder is suppose to throw the ball to once he catches or tracks the ball down. 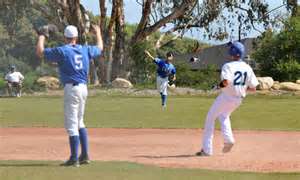 Once you throw the fly ball to outfielder and he’s concentrating on the ball, signal to one, you don’t want the outfielder to hear a verbal indication, he’s to be the cut off man.

The designated cut-off man will raise his arms and the outfielder must catch the ball, quickly turn back towards the infield and immediately identify the proper cut off man and throw a chest high strike to him.

(a.) Getting the ball back into the infield as quickly as possible is very important, obviously more so with base runners on, but it’s a good habit to train to the worse case scenarios.

(b.) A controlled proper throw to the correct fielder is important, as a wild high or off target throw only compounds an already bad situation;

(c.) Note that in a normal situation the cut-off or relay man would be yelling and waving his arms to clearly indicate an easy target for the outfielder to visually pick up. 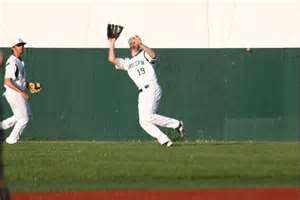 If you’ve read, and I hope you have, the many drills in which I incorporate a tennis or racquet ball into the equation, the drill and training aids utilized will not surprise you.

This equipment, once a coach becomes accustomed to it, allows the coach near pin point accuracy of ball placement, saves the coach’s energy, allows the coach to hit higher fly balls of shorter distance and nearly eliminates mistakenly hit ground balls.

Tennis or Racquet ball and Racquet 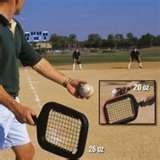 For this drill divide your outfielders, or the entire team if you want, placing half in center field and half the right or left field.

Hit fly balls into the outfield gaps which will force the 2 outfielders to communicate as to who will catch the ball;

Hit balls deep, shallow and somewhat more towards one fielder, making sure the other outfielder backs the play up.

Add more difficulty by incorporating your middle infielders into the mix hitting balls which require them to go back on the ball, but the outfielder must charge in.

Never Back-Peddle on a fly ball hit over your head. If you’re an infielder catching an infield fly on the edge of the outfield grass, turn, go back on the ball, then come back in if necessary. Back peddling 2 or 3 steps is enough for you to lose your balance and fall over backwards.

If an infielder and outfielder both are giving chase to a fly ball, the outfielder always catches the ball, even though either player could have caught it, if he yells he’s got it. Why? 99% of all ball players find coming in on a ball is easier to catch than going back on a ball.

On a fly ball hit into the outfield gaps, right or left center field, and either the left fielder and center fielder, or right fielder and center fielder can catch the ball, the Center Fielder always catches the ball if he yells he’s got it. Why? Generally speaking there is usually no advantage as to which outfielder catches the ball, but there must be established rules of who takes charge in order to avoid collisions between players.