There are a few Baseball Outfield Tips, which are based on science and must be considered when anticipating the reaction of the baseball in certain conditions.

In other words, Outfield Play is affected by certain laws of nature which we don’t have to understand, we just need to know it happens and what we do to react to it.

When playing right field, Most line drives hit will Slice or tail away from you, towards the foul line. Why?

(a.) When a right handed batter hits a line drive to the opposite field, his bat was late, either by design or just behind the fastball, coming through the hitting zone, and it doesn’t matter, the baseball will have a right handed spin which will tend to make it travel towards the foul line. 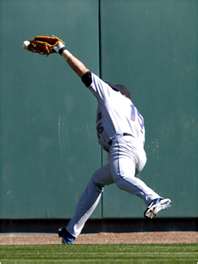 If you’ve ever seen a major league player run too far and either miss the ball or have to reach back in order to catch the ball, and wonder what the heck happened, he misjudged the slice of the ball.

For the most part, the center fielder is not really affected by this law of nature, as should there be a slight slice, he’s coming in on the ball and can easily adjust.

There you go…you’re first science lesson in Baseball Outfield Tips.

Playing a Texas League line drive is a particularly difficult, if not the most difficult, outfield play, even for professional baseball players, because reaction time is nearly identical for that required for a Hot Smash, but the mind has more to compute and analyze.

For a youth baseball team, whose players don’t have thousands of games of experience and instinct under their belt, the coach must teach a set of rules to follow which everyone understands and complies with in order to increase the chances this type of hit can be caught. 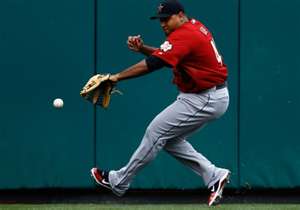 (a.) The first thing I teach my outfielders is to never hesitate to go full out for the catch, as that’s the only way they’ll gain the experience of instantly recognizing if they have a chance of catching the ball in the air or not.

It’s important that distinction, that their decision is trusted by the coach, be well established in the players’ minds in order to establish a “ never hesitate” approach to the ball as to whether he’s to try and catch the ball, even if diving is required, or let it bounce in for a hit.

(b.) Secondly, we work on anticipation, as the initial first step will be the determining factor if the player will have a chance of catching the ball in the air or not. Hesitate or step backwards and you’ve lost all opportunity of catching the ball before it hits the ground.

Should the player not get a good jump on the ball, he’s taught not to make a silly play trying to recoup from making the wrong initial response. He’s to come in on the ball, staying in front of it, taking a knee if he must, in order to keep the ball from getting by him.

Another insurance we teach, which decreases the charging outfielder’s fear of a base hit turning into a triple or inside the park home run, is the other  outfielders are running to back him up should he fail to catch the ball.

I continually stress to my players the spectators are in the stands, nobody on the field is ever a spectator, they are players which are always in motion during a play. 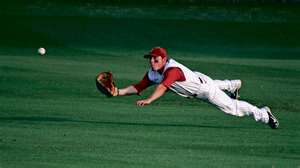 When a Texas Leaguer is hit in between the infielder and outfielder, they both are to give a 100% effort to catch the ball. The infielder continues to pursue the ball unless and until he is called off by the outfielder.

Once the outfielder calls for the ball, he always takes precedence, because he’s coming in on the ball making the catch easier than going out as the infielder is doing.

Hearing the outfielder calling him off the infielder immediately breaks off to his left or right, but continues to run towards the outfield circling around behind the outfielder to back him up in case he fails to catch the ball.

(c.) I’ve covered this in other discussions, but another issue involved in this play, was the discussion in internet sports forums on what to say when calling for a ball. Some coaches insisted “I’ve Got It” others “Mine, Mine” others “Take it, Take it.”

To be honest this debate confuses me. What difference does it make what is said as long as it serves the purpose?

I teach my players the number rule is, Be Loud when calling someone off a ball. It doesn’t matter what the Safe word is if nobody is able to hear it.

I then teach the players to yell “I got it, I got it.” I don’t know how much clearer or simpler you can make it and in these types of situations, simple is good. Misunderstanding and miss-communication results in dropped in base hits or players colliding, neither a desired result.

I’m a firm believer in having One set of instructions, which have the fielder taking charge and calling the other fielder off, as the only one who speaks.

I don’t agree with players yelling, at the last second,  “You Take It.”

Secondly, why risk the possibly of miss-communication by having two sets of calls? How many times do you think you would see both fielders pull up short, letting the ball drop in between them, then look at each other with surprise. This unbelievably still happens in the MLB from time to time.

The fielder yelling “Take It” naturally pulls up, but the other fielder pulls up short because he thought he’d heard I’ll Take IT.”

There is just No sense in complicating something that doesn’t need to be complicated.

Tip of the Day:

The most important tools a fielder has in his arsenal is anticipation, for a quick jump on the ball, and instant short term speed to run the ball down. I’m not implying running laps around the field is bad, but for more bang for my buck, we concentrated on running sprints.

I was more concerned with developing quick sensor muscles than endurance muscles as I felt endurance, as far as running to catch a fly ball, was all but useless in comparison to getting there quickly.