We’ve discussed Baseball Training Strategy in various lessons, especially in regards to the catcher and pitcher, but we’ve never really delved deeply into the Shortstop position, who is critical in setting the defense.

Let’s look at the traits and responsibilities of a shortstop which 99% of baseball fans never know are occurring although they may be intently watching their favorite MLB shortstop playing.

To review what you probably already know, shortstops have soft hands, a quick release, skillful and quick footwork around second base, and unbelievable range in reaching the ball. 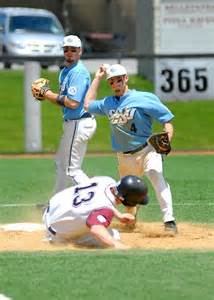 Baseball Training Strategy - Right Side Of Base

Ever wonder how a shortstop, of average foot speed, covers so much ground defensively that perhaps faster shortstops don‘t? Generally speaking, it’s their mental preparedness during the game. The mental decisions and immense amount of communications a shortstop goes through on virtually every play both pre-pitch and after can be the difference between a good shortstop and a Great shortstop.

For instance one simple form of communication is calling out “inside” or “outside” when a ground ball is hit to the right side, to either the 1st or 2nd baseman, so they know what side of the bag you want to receive the ball on when turning a double play.

Inside simply means the left side, or infield side of the base, while outside means the right or outfield side of the base. If you’ve ever seen a 1st baseman throw across a runner heading to second base, completely crossing up the shortstop and making the catch and return throw difficult and blamed the first baseman, you‘re probably blaming the wrong guy. It’s a pretty good chance that the Shortstop failed to communicate which side of the base he wanted the ball thrown to.

Another simple example is yelling “Flip” when delivering or receiving an underhand toss to or from the second baseman. There’s nothing like handcuffing your team mate, who was expecting a soft toss, but receiving a quick sidearm wrist flip instead. The difference in speed and timing of the two different throws can destroy a play if not communicated properly. 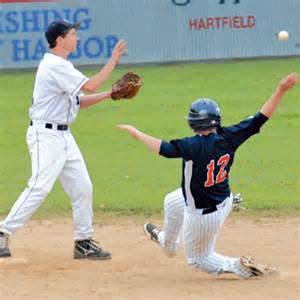 These are just basic examples. For the Real Thing feeling let’s walk through an actual example of what happens as if we are the shortstop.

We are leading in a one run game, in the bottom of a late inning and there are runners on first and second.

Your pitcher, who is a hard throwing right hander, has had great control, hitting his spots consistently all night, and the opposing team has a power hitting left handed hitter up to bat. What do you do as a shortstop?

(1.) The first thing I must remember is because the hitter is a lefty, I have to hold the tying run close to second and prevent him from getting a large secondary lead which offers him a greater chance of scoring on a ball hit through the infield.

As I juke the runner back to second base, I watch to see what the catcher is calling, and let’s assume he’s called for a fastball low and away. I will immediately use a closed fist behind my back and shade it to a specific side of my back. This indicates to my left fielder, who is watching for my signal, that the pitch is of a high velocity variety and to which side of the plate it is being called. The same would hold true for an off speed pitch, but I’d use an open hand, indicating off speed.

Baseball Training Strategy- Not Shortstops But You Get The Idea

This small piece of information is key for my left fielder as he can play a bit more shallow if he likes, and thereby increase his chances of cutting down the runner at the plate if a single gets through.

(2.) Next, while knowing my pitcher throws hard and hits his spots I have to decide whether I want to switch the steal attempt coverage of second base to my second baseman, as the chances of the batter pulling the ball has lessened and if I covered it may vacate the hole where he’ll hit the ball. I quickly get my second baseman’s attention, by whatever preconceived signal we have, such as slapping your leg with the glove, and give him the open mouth or closed mouth sign with the glove, always blocking my mouth from the prying eyes of opposing coaches and players.

I may perform this signal regardless of whether I am switching base coverage or not, as because it is late in the game and the opposing coach may have caught on to our signs by now.

If this turns out to be the case, and if I keep the coverage the same, there is a chance the runner will extend his lead too far. If he does this I will throw my glove open to the left, a signal to my pitcher, and break for second to initiate a timing pick-off play with him.

Baseball Training Strategy - Left Side Of Base 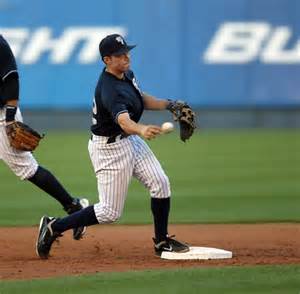 (3.) The third thing I must do is to make quick verbal communication with my 3rd baseman, indicating in case a ball is hit deep in the hole and hard enough, he should be expecting a throw from me in an attempt to go for a force out of the lead runner.

I also must focus on knowing that a base hit may score the tying run, so I am going to do everything possible to knock the ball down at all costs in order to keep it in the infield.

(4.) Another option you may contemplate is whether or not to shade the left-handed hitter to hit the ball to the left side, because of the velocity your pitcher throws and despite the fact that you are in double play depth.

If you decide to do this, you would begin your starting positioning a bit deeper and while slowly walking yourself into fielding position, you will kick a little dirt or make noise with your glove, hoping to fool the runner into thinking you are holding him, while you’re taking your final step towards the 3rd base side of the hole. 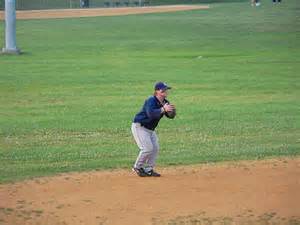 You’ve got to remember to not out-slick yourself by sacrificing a good squared fielding position, and don’t forget how you are holding your glove during this movement. The glove should always be open and ready after the pre-pitch signals have been passed on. You see far too many shortstops approach a ball with his glove closed and then flip it open at the last second. The obvious issue here is getting a ball off the lip of the glove because it’s not fully open and the inability to not adjust to any bad hops.

Once the ball is delivered actions are initiated in mille-seconds. Such as if the ball is hit to the first or second baseman, you have to call out where you want the ball delivered to second.

If the runner attempts to steal third base, you have to back-up the throw, the same if there is a single to left field. If there is a slow roller hit to you, you have to make the play at first in order to stay out of a big inning, and so on and so forth.

Baseball Training Strategy is all predicated on pre-pitch thought process and every single one of those thoughts leads to a decision that can make or break the momentum of an inning or game.

I think you now are aware of some of the intricacies and mental preparation it takes to play the shortstop position. Don’t ever fear it, embrace it and learn it in order to become a great shortstop. Read the lessons of this website, practice, practice & practice and you’ll become one of the elite shortstops of the league.