Base Running Training is very important because although running is a basic human instinct and physical ability, properly running the bases is not, it must be taught.

Since the subject of running bases is far too broad and intense to cover in one lesson, we’re going to concentrate of advancing from second base, whether ground ball or fly ball, but mainly reading a fly ball.

Let’s get advancing on a ground ball out of the way as there are only a few simple, although General rules to apply in quickly deciding whether to attempt to advance to third base or not on a ground ball.

1. Always make sure the ball hits the ground. What I mean by that is it’s a cardinal mistake to get doubled up by an infielder catching a screaming line drive and you have committed to running to third and can’t get back to the base in time to keep from being doubled up.

a. The key here is height. If you instantly realize the ball will soar well beyond an infielders’ reach … take off. But if there’s any doubt that a fielder could leap and catch the ball … hesitate, then take off after the ball passes the infield. 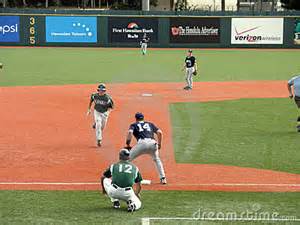 2. Never try to advance to third if the ball is hit in front of you, meaning to the left side of the infield. You’re in full view of the shortstop who could catch the ball and either tag you or throw to third for the out.

Should the ball be hit to the third baseman and he doesn’t see you trying to advance, the shortstop will notify him by yelling and you’ll run directly into a tag and the out.

3. Always advance on a ground ball to the right side of the infield. It doesn’t matter if the second or first baseman has a rocket for an arm, between your good Secondary Lead and your instant reaction of going to third base … it’s all but impossible to throw you out. In fact, at normal playing depth the infielder will not even look your way, but will make sure he gets the sure out at first base.

As with all rules there are exceptions such as;

a. With a runner on first you must try to advance whether the ball is hit in front of you or not as you’re in a force out situation;

b. If the infield is playing in with the sole intent of trying to cut down the lead runner, you at second, you may not be able to advance on a sharply hit ball to the right side. 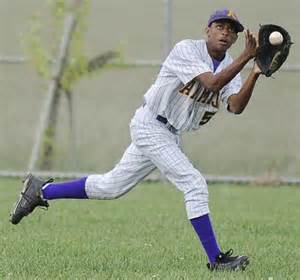 Moving Away From The Play

When a fly ball is hit to the outfield, while you’re on second base, there are some general guidelines of what your actions are to be in order to try and advance to third base.

On a fly ball hit to right field and you determine the ball will be caught, you should immediately return to the base from your secondary lead off, while the ball is in the air, tagging up and advancing after the catch.

There are of course factors to take into consideration before automatically running for third base. Is the ball hit deep enough? How strong is the right fielder’s throwing arm? What’s the score? You get the idea.

As a rule of thumb, return to the base, tag up, take off to third after the catch.

“But what if I’m wrong and the ball is not caught ?” you may ask. In the case the ball is muffed, misplayed or simply you misjudged, 99.9% of the time you’ll be able to advance to third anyway, and in most cases … score.

Now let’s look at a ball hit to the left center field gap, the left and center fielder are closing on the ball and you have no idea if the ball will be caught or not. What do you, as the base runner, do?

(1.) You are in your secondary lead and should be tracking the flight of the ball, … turn your body to directly face the baseball. Do not be looking over your shoulder or partially turn … turn 180 degrees and face the baseball. It’s imperative your eyes are in a panoramic view position and because you are directly facing the ball as it’s in the air, you will be able to split visual focus to both outfielders and the ball simultaneously, and still be moving toward third base, with backward shuffle steps.

Important Who Catches It 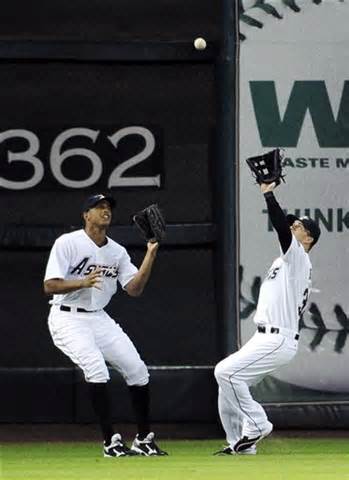 The instant you realize the ball will be caught, quickly scamper back to second base, tag up and advance as the ball is caught. Here’s where a training comes into play.

(2.) As you, the base runner, advance over to third base, your direction to the base should actually be the beginning of an angle turn, as though your intentions were preparing to turn and score, not stop at third base. So why would you create the angle turn versus running directly to third base in a straight line?

This is where reading the Outfielder and the Play becomes a factor. When you decided the ball was going to be caught by the leftfielder, you also saw he was going to make the catch while moving towards center field and away from third base.

In order to quickly stop and attempt to reverse his forward momentum, the leftfielder had to make a reverse pivot move before coming into position to make the throw, and the chances of a reverse pivot and ensuing throw could have ended up wild and way off line is greatly increased.

Additionally, you know full well there would be no chance that he could have thrown you out even with a combination of throws between the leftfielder and shortstop. However, had the ball gotten past the shortstop or ricocheted off his glove, you would have been in a great position to score simply because of the angle you took toward third base.

When you understand the rules of tagging, not tagging and hanging to tag, while at second base, that’s when you know you are committed to understanding base running as a critical tool to success. 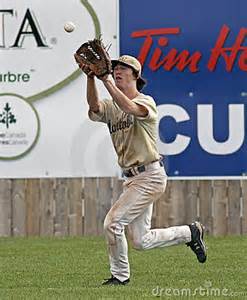 Here are some additional general rules which when coupled with simple "instinct" and thought processing, can greatly increase your base running skills.

(1.) With no outs always try and tag up and get to third base. The ways of scoring from third are much more than from second.

(2.) With one out get off the base and try to score on a deep fly ball ranging from the left centerfield gap to the right field line. Tag and advance to third when you see the ball will be caught.

(3.) Fly balls that base runners can easily tag and go, such as a ball hit to the center field warning track, they should go no matter the number of outs. However, first or third outs should not be made at third base.

(4.) On some balls in the air, you will need to hang out about 10-15 feet off the base and in the event the ball is caught, you can quickly get back, tag and advance to third base. This type of strategy is normally utilized when you see that the outfielders have to run a fair distance in an attempt to make a catch. If the ball is not caught, the base runner should be able to score anyway.

(5.) On shallower fly balls, when you know you cannot tag and advance, don’t get silly by tagging then trying and draw a throw by faking. Instead, get off the base far enough that when the ball is caught, you are able to get back to second base after the catch without getting doubled off. However, far enough off that if the ball is mucked you may be able to score.

It’s not uncommon for players to struggle with understanding when to tag, hang or get off a comfortable distance. Not unlike other baseball skills, practice and maturity will help.

Base Running Training to Stealing Bases

Base Running Training To Home Page