Stolen Bases, or the lack there of, can be the difference in winning or losing, whether it be at the little league or the MLB level, and a classic component of stealing is knowing how to slide.

The act of sliding may not appear to be all that difficult, but as most things in baseball, looks are deceiving. Sliding, and the type of slide you perform, is determined by player positioning, ball location, intent and other variables which must be decided in a split second.

A badly performed slide can not only result in the player being out, but the risk of injury escalates tremendously the more awkward the slide, jeopardizing ankles, wrists, and fingers as well as arms and legs. Obviously, we want to listen and apply the proper sliding techniques you will now learn.

As stated, sliding presents a certain degree of risk regardless of the skill, so it’s very important we not incur any injuries while training by using a few basic rules and some common sense.

(1) The first step in avoiding player injuries is giving advance notice to your players of your plans and that wearing of shorts will be prohibited that practice, and recommendation of wearing sliding pants was encouraged. Why this precaution?

To prevent “Raspberries,” which is a very common side affect performing repetitive sliding drills, and is a painful scratching or scraping of the upper layer of skin produced by sliding along a rough surface, such as very hard dirt.

(2)  Some coaches prefer to take their stolen bases training and teach the techniques on grass because it is a softer surface, but I hesitate to suggest that tactic for 2 reasons:

(a.) Depending on the type of grass in the sliding area, it could have the tendency to slice the skin as it slides over it, and no it won’t cause a life threatening injury, but it can sting like crazy.

(b) Players will not be exposed to real game conditions, which will greatly affect their ability to perform to their maximum level.

Some coaches utilize sliding training tools, such as mats or pits. I do not disagree with the use of training aids, however I would try to restrict their use to learning the particular slide’s technique.

If at all possible I prefer to always mimic real game conditions when possible, as it just seems to familiarize the player’s subconscious with the reaction on certain elements. 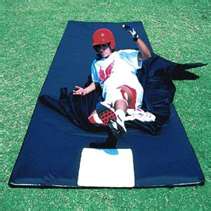 Conditions of damp grass and damp dirt react totally opposite of one another as the player scoots across it. The grass will actually increase your speed, while the damp dirt will stop you like you had air brakes. When using a training aid, such as a slide mat, always use it in conjunction with real life conditions.

You know the lessons of Lead-Off, Secondary Lead and Cross Steps, it’s now time to learn what to do when approaching the base you’re attempting to steal.

Knowing how to utilize various slide techniques is important as it could be the difference between being safe or out.

I have always taught, unless it’s a hit and run, You should never look over your shoulder to see where the ball is when stealing, and although I know some coaches argue taking a quick peek helps the runner decide what to do, I totally disagree because:

(1.) If you look over your shoulder and see the catcher throwing the ball, what are you going to do … Run faster? You’re already suppose to be running as fast as you can.

(2.) Unless you are a very seasoned veteran base stealer who has learned to avoid slowing down when you lose sight of your target, (the base) you Will slow down.

(3.) After looking at home plate you must turn your head back around, locate the base, estimate your distance, decide when to begin your slide and what type of slide to utilize, in my opinion, a formula for disaster.

Not looking back at the home plate area doesn’t mean you can’t usually tell where the ball is going. The location of the infielder, whether second baseman or shortstop, doesn’t matter, covering second base can tell you exactly where the throw is going.

If the fielder is cheating and covering one side of the base more than the other, that’s the side the throw is going to and he‘s positioning himself to receive the ball. You want to perform your sliding maneuver to the opposite side of the base and infielder.

Some coaches will argue a good infielder will try and juke or fool a runner by acting like the ball is not approaching when in fact it is, thus tempting the runner to slow, not slide or use the wrong slide.

All I can say to that is “Shame on you, the coach, if you don’t teach your players better than that.”

The Straight Leg or Pop Up:  and Stolen Bases

This technique is probably utilized more than any other and with good reason.

(2.) Offers the added capability of being in position to advance to the next base should the throw be errant.

(3.) Offers the Highest degree of Safety for the player.

For this technique drill, have your players start approximately half way between 1st base and 2nd base, as You want them to experience the drill while running at full speed, but you don’t want to wear them out too quickly and spotting them a lead off first will help.

For this drill, after demonstrating the proper technique, and feeling everyone understood the process, I incorporated the entire step by step process of stealing second base.

I assigned one of my pitchers to demonstrate a mock pitching motion, while the runners would focus on him, taking off as soon as they recognized their indicator. He never attempted a pick off or held the ball too long, he just demonstrated the indicator, the raising of the foot or tilting of the hips, which will occur when pitching from the stretch.

(1.) From the “Ready” position, upon recognizing the indicator, have your player use a cross over step, always used as they steal the base, and take off for second base.

(2.) Approaching the base, the runner should begin his initial slide maneuver @ 10 feet in front of the base.

(3.) As they begin their sliding motion they should literally leave the ground with their entire body, stress this is not a leap or jump movement, you don’t want to go high, it’s a forward downward motion.

(4.) Their right leg extended forward with the left leg folded underneath it @ under the back of the knee.

(5.) As their right foot comes into contact with the base, which will not move, the player allows the right leg to naturally compress, which raises the knee and prevents injury to the leg and foot by eliminating a sudden jolt of an abrupt stop which keeping the leg straight would produce.

(6.) This final body position, of legs being bent and braced against a solid object, and the energy created by the body moving forward, the player is capable of easily popping up to a standing position, which he can initiate an immediate run to third should the throw be wild.

He must be careful to not pop up off the base as he could be tagged out once he loses contact.

There are two versions of this technique and we’ll learn both.

The hook slide is designed with the intention of offering the smallest target for the fielder to tag by invoking a slight surprise, but mainly to move the tagging target away from him.

Hook Technique 1 is performed with the intention of getting your foot on the base safely, while keeping the rest of your body away from the tag.

(1.)  You will begin your slide @ 8’ from the base, closer than the straight leg technique because you’ll actually pass the base.

(2.) If the fielder is covering one side of the base more than the other, 99% of the time that’s the side the throw is going to, so You want to perform your maneuver to the opposite side of the infielder.

Instead of having your whole body as a target to tag, the infielder only has the foot and ankle, a much more difficult task.

The second technique of the Hook Slide is identical in nature and theory as the first hook slide with the exception you will be hooking the base with your hand instead of your foot.

All the same rules apply to performing each method, but some players feel more comfortable or confident using their hand to grab and hold onto the base instead of their foot, which they fear may come off the bag.

I recall having the same concerns as a young player, therefore, I’d recommend hooking the base with the hand, although later on you’ll think I’m contradicting myself, the reasons are different.

Stolen Bases - Hand Sliding By Base

Make a habit of instructing and reminding your players to consider field conditions when attempting stolen bases, as a wet or tacky infield surface, due to rain or over watering by the field crew, will not only slow them speed wise, but will cause them to hit the ground and stick instead of sliding

Head First Slide and Stolen Base

Because the head first slide, if there is a dangerous slide, is the one I’d identify as such, due to the increased risk of jammed fingers, broken wrists or dislocations being greater with this slide than any other technique.

However, it is part of the game, so I decided to teach the proper method for using the Head First instead of trying to stop my players from using it.

As I mentioned, the main danger with a head first slide is the increased possibly of injury to the fingers. So let’s eliminate that.

When attempting stolen bases it’s important to get Mentally prepared and this is especially true when implementing a head first slide.

(1.) Before you take your first step of your lead off have the full intention in your mind that you are going to utilize a head first slide, because without this forethought, variables could result in a hesitation on the runner’s part on whether to go into the base head first or feet first and that indecision can result in injury and an easy out.

(2.)  As you begin to approach the base begin to lower the top half of your body by leaning forward as you focus on the base, your body will automatically follow the head as it moves.

(3.) You will begin your slide @ 8’ in front of the base by propelling your body into the air forward towards the base, which done properly your body will absorb the impact of hitting the ground with the forearms, chest and thighs reducing any pain from the fall.

(4.) Be sure to Always keep your head up looking at the base. Depending on how much dust you kick up you may or may not see a whole lot, but keep the head up anyway even if you close your eyes, it reduces the risk of a neck injury.

Stolen Bases - Always Ask For Time Out Before Getting Up

(5.) Extend your arms forward, hands up off the ground and tightly clenched in a fist.

(6.) Do not slide into the base, but Over it. By sliding over the base with fists clenched you greatly reduce the chance of any injury to the wrists and fingers by accidentally jamming them into the base.

If you use batting gloves, and it seems everyone does these days, carry one in each hand, which will automatically force you to clench your hands creating a fist.

Final Tip:  Always ask the umpire for time out before trying to get back up.

Stolen Bases Back To Running the Bases