Technique and Tagging Up

The intent of this drill is to not only increase speed, much as wind sprints, but also to teach Proper Technique in running the bases, which affects every player regardless of speed.

Your team should know, or you’ll teach them if too young, that the shortest distance between to points is a straight line. Therefore, it’s important when running the base paths to quickly align yourself in a straight line to the next base, which requires the utilization of the method known as Cutting the base.

Prior to implementing the drill, you must instruct and demonstrate to the entire squad, the methods of how to Cut Bases as you run, and here’s how.

There are Two Trains of Thought regarding how to cut the base in order to propel yourself towards the next base and both differ on which foot to hit the base with.

However, they both have the same intention and that is:

(1.) Avoid altering your stride, which slows you down …

(2.) Avoid taking an approach which will propel you out of the baseline, increasing the distance to cover between the bases.

Method One and Tagging Up

Doesn’t matter which base you are approaching the technique is identical because the goal is identical, creating the shortest distance to the next base.

Your approach will be similar to a ) with the bottom of the ) representing the beginning point of your swing outward and the Top part representing the base. Or if it’s easier for you to understand, image yourself running a Backwards C. 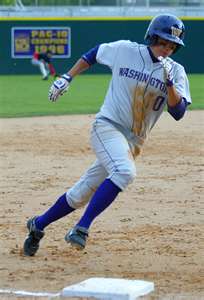 As you round the base hit the Inside edge of the base with your Right or Left Foot, (the different methods) which will allow you to sharply change direction and propel yourself straight towards the next base.

As you are rapidly changing direction remember you are fighting to alter your momentum and your entire body weight. Because of this, do Not step on top of the base as your chances of your foot slipping or your ankle turning, risking injury or falling down, increase enormously.

*** Some Little League Bases are soft and will give as a runner’s foot lands on it, but in the older divisions the bases become Hard and unforgiving. Teach the Correct Method and you’ll never have to re-teach it again for different circumstances.***

Don’t get hung up on the two different methods, which differ in which foot hit’s the base, as who really cares if your left or right foot hits first, however it’s imperative you Never  alter your stride in an attempt to hit the base with a pre-determined foot.

The two important skills to learn are, a slight swing outward and hitting the inside edge of the base with your foot without breaking stride.

Base Cutting Drill and Tagging Up

In order to familiarize your players with the cutting the base technique, set up some friendly competition contests by dividing the team into.

(2.) Have the runners race from second to home and home to second.

(3.)  The next pair of runners begin the process again.

The benefits of this drill are two fold.

(1.) The drill will increase speed virtually by running the sprints in a competitive atmosphere.

(2.) Teach the skill and importance of properly cutting the bases.

How will you or the player know if he didn’t cut the base properly?

A runner, who is running hard, who does not properly cut the base, will run 20 feet extra out into the outfield, losing the race, will quickly realize the importance of the drill. 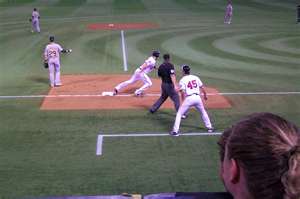 Learning to tag up after the catch of a fly ball and advance to the next base, especially Home Plate, is one of the most basic and important skill you can teach your players.

(1.) Anticipation in timing, when to leave the base after the catch

(2.)  Gauging distance and decision making, is the ball deep enough for me to score.

(1.) Have the team line up single file at 3rd base, each to take their turn at attempting to score.

(2.) Hit shallow to medium depth fly balls to the left fielders, who will alternate fielding the fly balls, having them throw home after every catch whether the runner attempts to score or not.

(3.) The intent of the drill is to time the tag perfectly and score, but not to run into an easy out if the ball is not hit deep enough, which is the decision making process.

(4.) An option is to have the shortstops, alternate, and run into the shallow outfield, hands held high like a goal post, and line the outfielders’ throw up to the catcher.

(A.) Be sure All runners are wearing helmets when running.

(B.) Tell to runners Not to slide into the plate.

(C.) Two reasons to require your catcher to be in full gear:

(1.) Acquiring the feeling that the gear is a second skin, hardly noticeable when they wear it.

(2.) They will be in full gear in a real life scenario.

These drills will help the slowest runner become a step or two faster, and that can easily be the difference between the runner being out or Safe.

Tagging Up Back to Running the Bases