The “Play at the Plate,” is usually associated with the catcher vs runner scoring and because it can result in a violent collision, the play is practiced in order to prevent injury to the catcher.

We tend to overlook or forget, the “play at the Plate,” often involves the pitcher vs runner, which actually occurs more frequent in little league play, due to the pitcher and catcher’s lack of experience, than the catcher vs runner play. Yet we seldom practice this play.

Today we’ll change that by demonstrating and explaining the steps of the “Play at Plate Drill,” for pitchers. 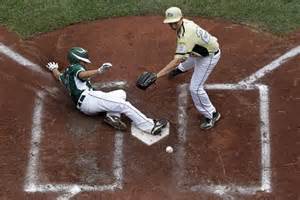 baseball coaching - Not Getting Hurt

Play At The Plate Drill 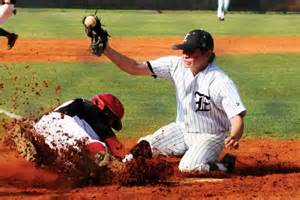 1.    Set your infielders in their regular positions with gloves on;

3.    The coach places a baseball somewhere behind the catcher, who is facing the pitcher;

4.    The coach will yell “Go!”… the runner takes off for home … the catcher peels off and retrieves the ball … the pitcher runs to cover the plate;

5.    The catcher retrieves the ball and throws a low strike to the pitcher who is covering home plate.

6.    The pitcher tags the sliding runner out.

Sounds pretty simple doesn’t it? Just flying to the moon sounds simple, but …. 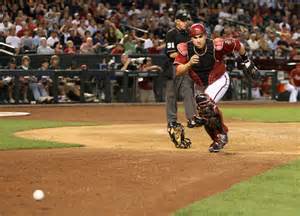 baseball coaching - Go Get It

1.    In order for the catcher to know how to go after the passed ball and peel off in the correct direction, he must be told if there is a left or right handed batter at the plate.

a.   You don’t turn around and go directly back because you’ll run into the umpire;

b.   If you turn in the direction of the batter, you’ll run into him.

c.    You must peel off to the opposite side of the hitter which avoids contact with the umpire & batter.

2.    The catcher must remove his mask and flip it away from the home plate area. This is done while on the run, without taking your eyes off the baseball.

In other words, the catcher must have the instinct and feel of what direction and how hard to discard the mask. Simply flipping the mask off his head, leaving it in the home plate area creates a dangerous situation for the pitcher, runner and umpire. 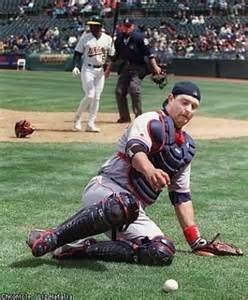 1.    The catcher must stay Low as he chases the ball;

3.    Pick the ball up bare handed. You don’t have time for a mitt to hand transfer as the runner will beat the throw to the plate, so if you bobble the ball with the bare hand … the runner would have scored anyway.

4.    He must throw the ball low using the plate as his target. You don’t have time to locate the pitcher’s glove. 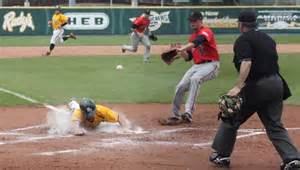 As soon as the pitcher sees the ball has gotten passed the catcher he must;

1.    Immediately begin running forward towards home plate. Do not hesitate to see if the runner is trying to score … assume he always is;

2.    Yell directions to the catcher of where the baseball is;

a.   Remember the catcher lost sight of the ball as soon as it got by him;

b.   The ball may have skipped off his mitt or hit the umpire’s leg, which could have totally changed the ball’s direction.

3.    Position yourself on the First Base side of home plate;

a.   The last thing you want is a severe injury to a leg or ankle due to a collision at the plate;

b.   Stay low with your body and glove, position your glove in front or directly above the rear of the plate, as the throw will be coming low and to the plate; 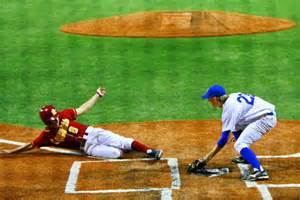 2.    If the runner is not to the plate when you receive the ball, place your glove low to the ground between the plate and third base, and let the runner slide into the out.

The Second baseman should move to the pitching mound to cut off any errant throw back up the middle.

The Third Baseman should move in line with the direction the catcher will be throwing the ball to cut off an errant throw.

The Shortstop should move to cover third base as if another runner was on base.