For the most part the books are beneficial, some more so than others, but they all drive home one important point … There’s Never Too Many Drills  to run your players through.

My main issue with a lot of these books and videos, is that they skim the top of the drill, without explaining the Reason, Intent and Philosophy  behind the drill, as well as the actual mechanics of the drill.

You’ll discover drills throughout this site and I encourage you to explore as many as possible. 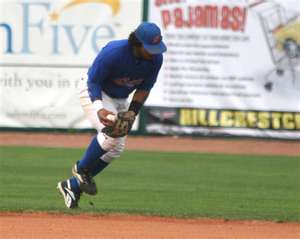 Make Them Move To The Ball

It doesn’t matter if a player is an infielder or outfielder, every player must be skillful at fielding ground balls. Obviously infielders are exposed to more ground balls than outfielders during the course of a normal game, but outfielders must be able to charge a ground ball and come up throwing in order to throw a base runner out or keep him from advancing.

ntent- To have players field the greatest number of ground balls possible during a practice session.

Ground Ball Drills which simulates real play, such as the coach hitting screaming ground balls to infielders, is of course the Best practice method. Unfortunately, the number of ground balls hit to each player is very limited and that defeats the purpose of intense repetition, which is the greatest teaching tool. 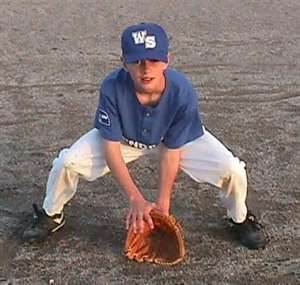 Ground Ball Drill- Pair your players up facing one another about 20‘ apart, if there’s an odd number make on a trio, scatter them around the infield allowing plenty of space between each.

Have them throw ground balls to one another. The fielding player should be in good fielding position, field the ball, then throw a grounder back to his partner, who performs the same actions.

As the Coach make sure the drill becomes intense as it progresses. The ground balls should be thrown hard, slow, short hops, directly at the fielder, to either side of the player.

When your players become proficient at fielding these types of thrown ground balls, which are intended to be difficult to field and simulate every type of grounder they’ll encounter, the remaining task of picking the ball up off the bat will be relatively easy to teach.

From 8 years old to major league level players, sometimes a hitter will develop bad hitting mechanics which creates problems. One such common problem is hitting a lot of pop-up fly balls, which translate into an easy out. 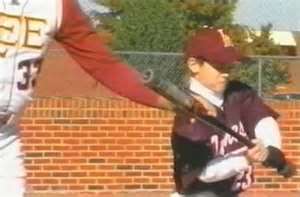 There are many reasons which could cause this mechanical flaw, but two major ones are Dropping The Back Shoulder, which creates an upward swing and Leading With The Bat Head no matter where the ball is located, which prohibits consistent solid contact with ball.

For this drill you’ll require a batting tee and the lightest bat the team has.

Have the batter assume his stance, then hit the ball off the tee while holding and swinging the bat with his lead arm only. By being forced to hold and swing the bat with one hand, the player will lead with the butt or knob of the bat instead of the barrel first. (He’ll be forced to create a whipping motion in order to power the bat through the hitting zone.)

In order to hit the ball squarely off the tee, the player can not drop his back shoulder, which allows the batter to either swing level or down on the ball, which keeps the ball from being hit in the air. Additionally, the back shoulder acts as a counter weight, to compensate for the weight of the bat, which also aids in preventing the shoulder from dropping.

After numerous one handed swings, which is determined by the coach who is watching, have the batter use both hands to swing. It’s imperative he swing the bat with the same mechanical motion he used one handed. Muscle memory will retain the motions after a certain number of swings and the hitch will be corrected.

This drill is similar to the Ground Ball drill except it concentrates Solely on throwing and fielding short hops, which is one of an infielders worse nightmares.

The intent is to familiarize players with the different reactions required to field short hops, such as when to charge the ball, back up on the ball, (which occurs 1 in a 1000 times and is normally an awful choice) back hand the ball and etc. 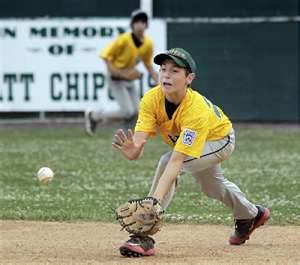 Pair your fielders just as you did with the ground ball drill and have them throw short hops only to one another, directly at and to each side of the fielder.

Coaching Tips: Teach your infielders to catch the ball out in front of their body where they can easily see the ball, keep their heads down, players have a built-in survival tendency to pull their head in order to keep from being struck in the face, and try to keep the glove under the ball allowing it to bounce into the glove. 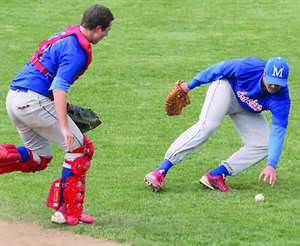 Tell Him Where To Throw -

There are many times, by accident or by design, a ball will be hit out in front of the plate landing between the plate and the pitcher’s mound, with runners on base. Like I said, this could be the result of an accidental miscue of a powerful swing, referred to as a swinging bunt, or a designed sacrifice bunt play designed to advance runners.