Youth Baseball Drills are of course, designed to teach fundamental and advanced skills and tactics required to increase a player’s abilities. Although the majority of drills are designed to address the Big Three - Catching, Hitting and Throwing, there are many more intricate skills which are required learning in order to become a Complete Ball Player. 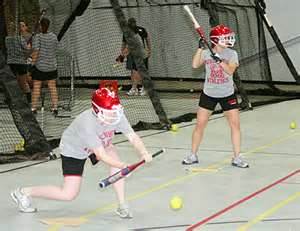 Although we have discussed the key aspects of “ How To Bunt,” you can never get enough of a good thing and repetition is the name of the game when it comes to learning.

1. NEVER grip the barrel of the bat with your fingers wrapped around it, exposing them to contact with the baseball. Chances are you’ll only make this mistake one time, but it’ll be a Very Painful One time.

2. After squaring around to bunt, Always make sure your bat is in Fair Territory or the chances of bunting the ball fair are greatly reduced.

3. Don’t firmly grip the bat, rather caress or hold it loosely in your hands, allowing the bat to move and absorb the energy of the thrown ball, which will deaden it, reducing how far the ball travels.

Once we have learned these basics, it’s time to learn ball placement. There are numerous reasons for a bunt such as, bunting for a hit, sacrifice bunt, suicide bunt, and for the most part, the success of all of them depends on bunting the ball to the proper area, which forces the defense to react in the desired manner we want. 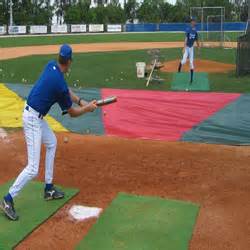 For this drill, the area in front of home plate needs to be divided into Zones, ranging from the third base foul line to the first base foul line. This area can be divided as many times as desired, but Four to Five is my recommendation.

There are “Bunt Training Tools” which are divided into colored zones which work quite well, as the bunter’s vision picks up the desired colored zone he’s aiming for, even as he concentrates on the pitch.

In lieu of having the training aid, divide the zones in any way possible, such as running chalk lines, using several colored 100’ tape measurers, something which will aid the batter in directing the ball to that particular zone.

If you’re just beginning the drill, you may be content with the hitter learning to bunt the ball straight, left or right. Just make sure the batter knows which direction he’s attempting to place the ball, this is Not a bunting drill…it’s a Placement Drill.

The direction a ball is bunted depends on the <I>Angle</I> of the bat when the ball strikes it, and that is controlled by the hand holding the handle of the bat. 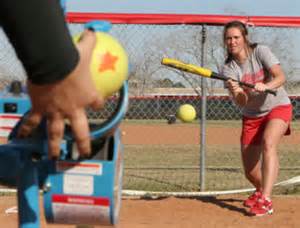 Imagine your bat being the rudder of a boat and you can control which direction the boat travels by moving the rudder, which is essentially what happens when angling the bat. How to accomplish this?

The varying degree in which you angle the bat, thusly placing the bunted ball, is what the drill is intended to teach. 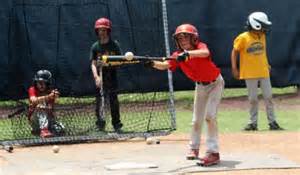 As simplistic as bunting appears to be, make no mistake about it …it’s Not. As a bunter you deal with all the aspects of a regular hitter, plus some. You must adjust to the type of pitch thrown, fastball, change-up or curve, location, inside or out, high or low and unlike a regular hitter who just wants to make good contact, you must hit the ball placing it in a certain spot.

Youth Baseball Drills - Not So Easy.

Chances are you won’t see this Skill drill explained anywhere else on the Internet except on this site because it is a very advanced drill.

The intent of this drill is to familiarize an outfielder with playing a ball off the Wall and immediately finding his cut off man. The word Wall explains why this drill is so advanced, as neither regular youth league or high school ball parks have walls, they have fences, encompassing the outfield.

Players who inspire to play outfield at the college or Semi-Pro level should perform this drill as they will encounter stadiums with walls. 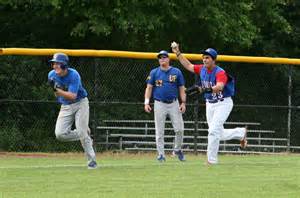 2.Ideally 3 players…the outfielder, a person throwing the ball and a cutoff man. The Thrower can serve as the cutoff man if necessary.

3. A Building with a solid wall in which to bounce the ball off of, or a Handball Court which is an excellent area to practice this drill.

The Outfielder assumes a position, 25’ to 30’ away from the wall facing, as if he’s looking into the infield and home plate.

The Cut Off Man will play 60’ to 80’ away from the outfielder and give him a target to throw to after fielding the ball. 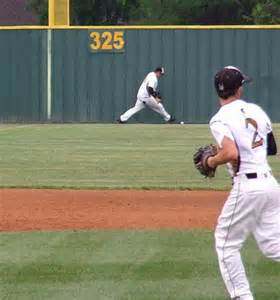 The Cut Off Man will play 60’ to 80’ away from the outfielder and give him a target to throw to after fielding the ball.