Proper execution of a squeeze bunt, where the runner attempts to score from third base on a bunted ball, is a thing of beauty to watch unfold, a thing of beauty that is unless you’re behind the plate catching trying to prevent it from being successful.

There are essentially 2 types of squeeze plays, the suicide and the safety squeeze, and I’m going to teach you, as the catcher, methods to implement when dealing with the two situations.

The catcher is usually not only the toughest player on the field, but also the smartest with a good understanding of the game and an instinct of what’s happening, or could happen on the field.

(1.) The first thing is to always be aware of the situation on the diamond. You would automatically know if the other team was down 7 runs, there would be absolutely no good reason to expect a squeeze play, as 1 run does them little good. However, if you’re in extra innings and the runner on third, with less than 2 outs, represents the winning run, the option of a squeeze play being called increases 10 fold.

(2.) If you’re not already, immediately get into the habit of looking at the coach before every pitch in order to see if he wants to call a pitch or a defensive play. 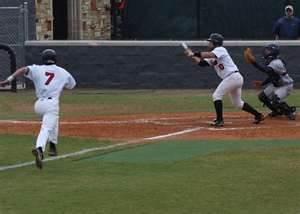 (3.) Receiving the play from the coach, Before the pitcher toes the rubber, step out in front of home plate, and give your defense the signals calling for a particular defensive alignment or coverage. It doesn’t matter if it’s a verbal signal, hand signals, or a series of both, the intent is to not give away the defenses’ intentions to prevent it from being countered by the offense.

(4.) It’s important to realize you are not a non-thinking robot behind a mask. Should the coach not offer a defensive alignment call, but you consider it important to call one, do so. After calling the play …

(a.) Always check, with a glance, to insure the coach doesn’t want to call a different play than the one you just called.

(b.) Never counter a coach’s signal.

Another quick note, it is important to move to the front of the plate before giving the signals, as by merely standing in the catchers box, the outfielders may not realize you’re giving signals and not just stretching your legs. Moving out in front of the plate immediately draws their attention:

Suicide Squeeze: Derives it’s name from the fact the runner on third base breaks for home plate at the beginning of a pitcher’s windup or first movement from the stretch position, and if the batter fails to bunt the ball, the runner is most likely out at the plate. Thus the name … score or out. 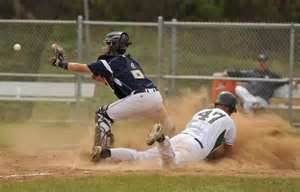 The suicide squeeze is the easiest of the two to defend against, especially if the defensive play was called ahead of time, because the runner breaking from third base gives the play away. However, this doesn’t guarantee the successful stopping of the play if the defense doesn’t quickly and properly react.

From a catcher’s perspective realizing the squeeze play is unfolding without help is extremely difficult because the right handed batter blocks his view of the approaching runner. I’ve never seen or heard of a squeeze play being called with a left handed batter at the plate just because of this reason, the catcher has a clear line of sight at the runner coming at him.

The infielders should be yelling “squeeze, squeeze” the instant they see the runner take off for home, as this is a 2 fold benefit.

(1.) It alerts the pitcher, in case he hadn’t picked the runner up in his peripheral vision …

(2.) It alerts the catcher the runner is coming.

The reason the pitcher, and obviously this should have been worked out and practiced before now, throws the ball high and tight, is it’s human nature to try and not let a ball hit him in the head, and although the pitcher is not throwing at the hitter, the batter puts himself in harm’s way by squaring to bunt.

Catching the ball the catcher should immediately move forward to the third base front corner of the plate, diving if necessary, with a low tag because the runner will be sliding. Do not let the batter keep you from moving forward, although he has probably moved backwards in order to avoid the high and tight pitch, as he has a responsibility to get out of the way or risk being charged with obstruction. 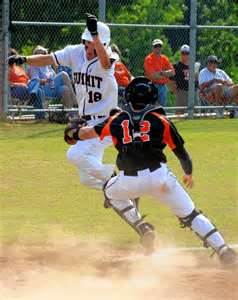 The Safety Squeeze and Squeeze Bunt

The safety squeeze has the same intended results by the offense, scoring a run through a bunted ball, but removes the risk of an automatic out because the runner doesn’t commit to home until the ball is actually bunted. This may appear to be the best bet for success, but the safety squeeze is difficult to execute without an excellent bat handler at the plate and an instinctive runner at third who will quickly realize a good bunt and not hesitate breaking to the plate.

Defense: Calling a defensive alignment against a safety squeeze is nearly impossible because the only way, and that’s not a 100% sure, to combat the play is to have the third and first baseman playing in expecting the bunt, which may not ever happen. This puts the infield in the dangerous position of having a ball which would have normally been caught, scooting through the infield for a hit. This could result in becoming a Big inning and teams win by not allowing big innings. --- Squeeze Bunt 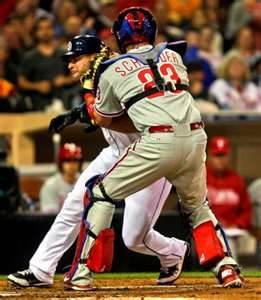 The responsibility of what to do on a safety squeeze falls squarely on the catcher’s shoulders because he’s facing the play, seeing the entire field. ---- Squeeze Bunt

(1.) Should the bunt be poor and you, the catcher, can quickly field the ball, attempt to get the runner trying to score out, however, if the ball is bunted too far out in front of the plate, take a step in towards the infield and throw a chest high strike to first base.

(2.) Immediately decide where the ball is to go and verbally yell directions. “First, first, first” doesn’t matter who fields the ball, the play is at first.

(3.) Should the batter offer and miss the ball, or allows the ball to pass without bunting, and the runner is too far off third base, catch the ball and immediately run straight at the runner.

(a.) If he’s not as far off as you thought, he’ll quickly return to third…

(b.) Should he be caught napping, run as hard as you can with the ball out away from your body where your team mate can clearly see it, do not ever feint a throw as you may fake out your fielder as well.

(c.) Once the runner is committed to returning to third, throw the ball to your fielder who should be able to put the tag on.

Just remember to always chase a runner back to the base he came from. You want the put out, but if that fails the runner is still at the original base, not advanced to the next.