When thinking Infield-Drills, some may consider a ground ball hit directly at an infielder, which has been crushed by the hitter and because the ball is on you in a blink of an eye, giving the fielder literally no time to adjust, as the most difficult ball to field.

In my experiences I’ve found just the opposite. If you’ve practiced your quick hand techniques, your initial fielding position is correct and you’re watching the ball, it becomes an instinctively reactive thing. Instinct is good, as it doesn’t allow you time for indecision.

In my opinion a Slow Rolling Ground Ball hit directly at an infielder is a much harder play to make because there’s a correct method to make the play, and an incorrect method, which are nearly identical, but due to the speed of the play, one results in getting the out, while the other rarely does.

That‘s not all, all the infielders, third baseman, shortstop and second baseman, each have different fielding methods in order to make the play.

Let’s learn how to field a slow rolling ground ball and turn it into an out.

(1.) The very first thing an infielder does, regardless of position, is Immediately charge the ball. This is where being in proper fielding position, which is low to the ground, and following the ball from the pitcher to the bat, allows you to instantly begin forward.

(2.) Stay Down ! Staying low is every bit as important, if not a bit more so than forward speed. 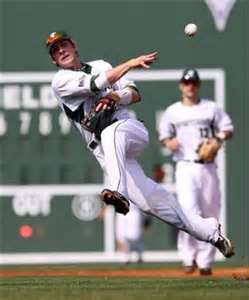 a. The eyes must remain as still as possible, bouncing eyes result in bouncing balls which are more difficult to gauge. If you raise your upper body, then lower as you approach the ball, you have forced unneeded motion and bouncing of the eyes.

b. You’re going to have to field the ball low, so why straighten up only to have to return to the original position? Doesn’t make sense.

(3.) Always Field the ball on your Glove side, which is normally the left side of the body as most players throw right handed.

(4.) As you field the ball, that is as it enters your glove, you should be landing on your left foot.

(5.) Make the ball transfer from glove to throwing hand, as you are taking the next step.

(6.) As your right foot, the next step, hits the ground, push off, throwing sidearm to the first baseman.

1. Field ball on your left side, simultaneous with the left foot hitting the ground.

The fielding elements of the shortstop are essentially the same as the second baseman, stay low, left foot right foot throw, but there are key differences.

(1.) In order get the maximum velocity on the throw the SS is required to Circle or Surround the ball as he moves forward.

a. What this means is, instead of taking a straight line to the ball, charging directly at it, like the second baseman, the Shortstop begins his forward movement in a slight Right angle approach to the ball. 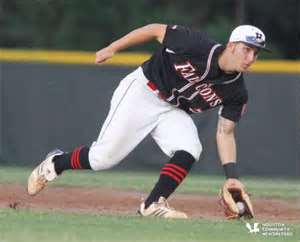 (2.) The fielder’s movements have him moving in a backwards C or ) motion, which allows his momentum to be going forward, towards first base, as he fields the ball and allows for a stronger throw to first.

(3.) Instead of throwing side arm, the shortstop throws ¾ three quarter.

The 3rd baseman could be compared to a kamikaze pilot, it’s do or die and hesitation or wasted motion is not permitted.

(2.) Throwing sidearm across the body; 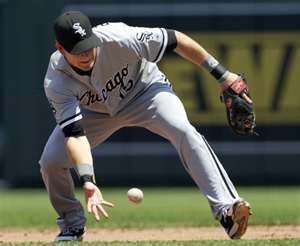 These all apply, but in reality SPEED is the only thing that really matters for the third baseman. The speed in which he can reach the baseball and throw it to first base.

The slow roller for the third baseman is much more difficult to play than for the middle infielders. If a sacrifice bunt or even a regular bunt for a base hit is attempted, the third baseman instinctively begins charging home based on the hitter’s bat maneuver.

But a Swinging bunt, as it’s called, which is not a bunt attempt at all but the ball reacts as if bunted, demands hesitation on the part of the fielder. His vision has told his mind the batter swung hard and made contact with the ball, thus the ball is approaching quickly.

In reality the ball is moving in slow motion because the ball was not well hit and the player’s vision and mind must re-analyze this in order to begin moving forward. This normally takes only a split second, but split seconds on this play are pivotal. 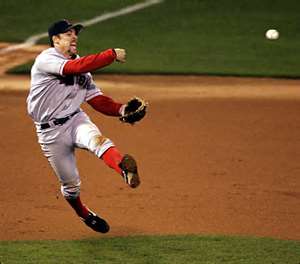 (1.) The third baseman must charge hard;

(2.) Field the ball with his bare hand and throw in one continuous motion, there’s no time to become set.

Now you can understand my argument that perhaps a Slow Roller ground ball may be the hardest play an infielder has.