There are 35-38 elements in how to hit baseballs, depending on who you are talking to and I’m not going to argue the schematics of the numbers, except to say that’s TOO many to remember and implement at one time. 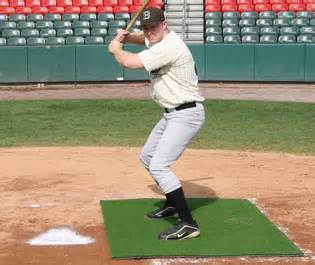 1. A hitter must be balanced and have an explosive batting stance, which is somewhat self-explanatory. Balance is the key to every starting position in every sport known to man as it’s the foundation on which the body uses initiate movement. Therefore, weight evenly distributed over the hips and feet properly positioned is the key to balance.

Explosive means having the ability to instantly react. I’ve posed the question before do you think a hockey goal tender or a tennis pro, standing still and erect can suddenly react and stop a puck traveling 100 mph or return a 98 mph serve? Nearly impossible.

In order to remain explosive the muscles can not become tensed and the best method to prevent that is movement. Keeping the body slightly swaying, hands moving or rotating the bat before the pitcher becomes set, is imperative.

The key element here is to know when to become completely still, body and head. 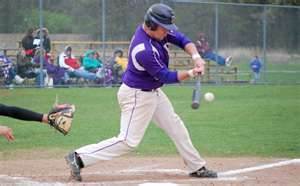 2. Some batters will let their front hip and shoulder open too soon, referred to as “Flying Open,” and this makes hitting a pitch on the outside portion of the plate nearly impossible because you can’t reach the ball with the bat.

One simple trick to help eliminate this problem is instead of pointing the toes of your lead foot straight or square to the plate, cocked them slightly, an inch and absolutely no farther back than 2”, towards the catcher.

This will force you to keep your front hip and shoulder closed longer, because you must move your front foot to the proper positioning, preventing opening up too soon.

3. This next skill may be rather difficult to comprehend at first because it appears to be one movement, but in reality is two. A hitter must have his bat loaded when his front foot hits the ground. Let’s break it down.

(a.) As the pitch begins travel towards home plate, the batter will utilize his foot Starting Mechanism, either lifting the front foot and moving forward, simply lifting the foot and setting it back down, or numerous other slight variations.

(b.) The front foot will come back into contact, landing, back onto the ground. The baseball bat has not begun forward movement until the foot hits the ground, rather it remains in launch position.

(c.) Then the bat is swung or not swung at the ball. 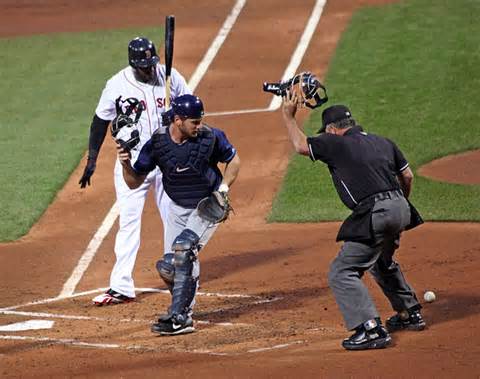 Everyone Has Eyes On Ball

This is a two step process, but because it occurs so quickly and fluidly, it appears to be one continuous movement. You’ve heard the saying “hitting off the front foot” which means the timing is off between foot plant and ball to bat contact, which produces feeble ground balls because of lack of power.

4. This may sound quite elementary, but is actually a huge hitting problem. A hitter must stride (move) Directly towards the pitcher, as an inch or two to either side can greatly have a negative affect on the swing.

One must remember, subconsciously it’s not natural for a person to move directly forward towards a traveling object which could hurt him.

One trick to verify you’re stepping correctly is to:

Measure 1 inch off the end of the pitching rubber and drive a nail or stick in the ground.

Do the same at home plate, securing the stake or nail passed the back corner.

Tie a string taunt to each end, but not taunt enough to raise it off the ground.

5. You’ve heard the saying “Keep your head on the ball,” but do you realize this is intended to be performed exactly as stated. Your head is initially turned sideways watching the pitcher, picking up the ball and watching it to the bat. If you don’t swing and your head is still sideways looking out toward the pitcher, we have a problem.

As the baseball crosses the plate, even though you’ve decided it’s a ball and you will not swing, your head should turn and follow the ball into the catcher’s mitt.

Whether hitting or fielding a ball your eyes should Never lose contact with ball !!

1. It trains the eye to always be on the ball;

2. It allows for split second reaction to an unexpected direction change of the ball … a bad hop or a curve ball dropping;

3. Watching the ball deep into the zone offers the hitter another split second to decide whether to swing or not. 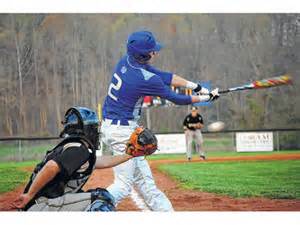 Trying To Pull An Outside Pitch ... Bad Results

6. You’ve heard “Use the whole ball park,” or “Hit the ball where it’s pitched,” which is simple logic, not a magical formula.

If you bat right handed and attempt to pull a pitch on the outside portion of the plate to left field, you’ve greatly reduced your chances of hitting safely and nearly completely eliminated hitting the ball with power. Why?

Without delving into mathematical equations which explains the physics of the issue, I’ll simply say “The forced degree of angle” makes the difference.

*** A 98 mph fastball located on the outside portion of the plate, hit to the right side of the field, requires the line of travel, angle direction change, of the ball to change very little, thus losing very little of its velocity. Then add the ball’s velocity with the speed and velocity of the bat striking it …. The velocity and power in which the ball travels increases dramatically.

*** Using the same example, except attempting to pull the ball to the left side of the field. The 98 mph fastball must literally come to a screeching halt in order to drastically reverse the angle of travel, which means the speed and velocity of the bat is the main force powering the ball.

That situation would be bad enough, but in reality the baseball is using it’s 98 mph velocity to actually resist the bat’s attempt to change it’s direction that radically.

7. Hitting through ball is again a term you’ll hear in tennis, martial arts or any other activity where you’re attempting to increase power. In essence it means following through the target and expending every bit of energy you have when striking it.

An easy trick is to image there is another baseball directly behind the ball you see coming in and you want to hit both the balls, which requires using all your strength.

Another is to pretend the ball you’re trying to hit is water logged, despite it being a brand new game ball. You know how heavy and dead a wet baseball is, therefore requiring maximum power to drive the ball.

There are numerous exercises and drills on the site to train you on driving through the target.

How to Hit Baseballs to Hitting