When considering how to coach baseball it’s important to remember baseball is not bound by what some may consider a normal building block process, such as learning arithmetic, then geometry, then algebra, then trigonometry and so on, as it’d be impossible to learn algebra before comprehending the multiplication tables. 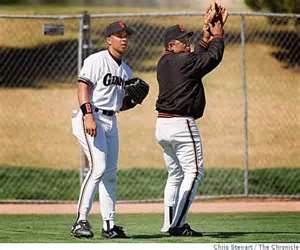 Baseball is really a rather odd animal when you think about it, as the mechanics of hitting have little to do with the mechanics of fielding or throwing, yet learning all three is required in order to play the game, and there is no logical reason you must learn one before the other, as being ignorant of one has no bearing on learning the other.

Based on this logic, this segment of learning how to coach baseball will utilize what’s known as a “Shotgun” approach, which simply means instead of focusing on one skill set or target, as a rifle would do, we’ll cover several different skill sets or targets scattered in the “must know” categories of baseball, much as spattering shotgun pellets do.

There are no two little league ball parks, or major league for that matter, which are identical. Location, city ordinances, funding, local philosophies, all play a role in how a ball park is built. Since the baseball field will be your arena or stage on which you’ll perform, it’s probably a good idea to know the lay-out and quirks, if any, the field has. 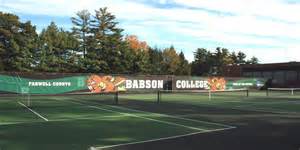 How Far To Fence?

Your recon of the playing field should begin as you approach it.

(1.) What about the lights? Are there lights, how tall are the standards, what are they made of, are they within play? What difference does it make?

(a.) The height of the lights could play a pivotal role, especially on the outfielders, on whether there could be an issue seeing fly balls. High light standards could blind a fielder should a high fly ball be hit, where lower light heights could interfere with line drives to the outfield. No different than making a mental note of the sun and sky, note the location and height of the field lights.

(b.) Some fields won’t be enclosed, therefore the light standards could be in play and knowing whether the poles are wood and rounded instead of metal and octagon, could give you an advantage of guessing which way the ball will ricochet off it.

(2.) What type, if any, enclosure is used for the outfield?

(a.) Most fields, especially little league, will have a chain link fence enclosure, but many parks will also have wood, brick, concrete or sheet metal enclosures.

(b.) How high are the enclosures? Knowing this ahead of time pre-programs your mind that there is a possibility a ball will not automatically be a home run over the fence, but may hit the high wall and stay in the park, therefore never give up on the ball.

(c.) Are the enclosures covered with a padding? Knowing what type of a collision to expect, should you run full speed into the enclosure, should have a direct bearing on how aggressive you are close to the wall. Running into a chain link fence with give, or a pad for cushioning is not the same as running directly into a non-forgiving concrete or sheet metal wall. 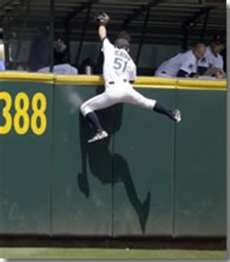 Sometimes You Can use The Wall To Help

(d.) Is there a warning track and is it adequate? Fields with solid barriers will usually have a warning track letting fielders know when they’re closing on the wall, but it’s important you know if it is 5’ wide or 15’ wide, in order to not pull up too soon or slam into the barrier, possibly dislodging the ball from the glove after a great catch. 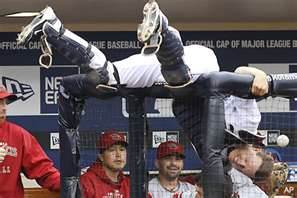 You Won't Get Any Help From The Opposition

(3.) Are the dugouts field level or below grade? I’ve never seen a little league ball park with below grade dugouts, but should you find the exception, or shall we say a championship game is played at a college stadium, the chance of below grade dugouts exist. This is no big deal, as long as the fielders are aware of the possibilities of falling into the dugout if not careful. 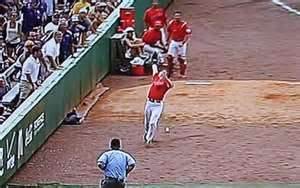 There’s little doubt you’re thinking we’re going to learn sliding, such as in stealing bases or a close play at the plate, and you’d be right … and then again… wrong.

Nearly identical techniques, with a few modifications, we teach our offensive players in regards to safely sliding into a base, applies to outfielders attempting to catch a dying line drive before it hits the ground.

Assuming you have taught your players how to slide, if not go to Baseball Coaching, then return, they already know the basics. 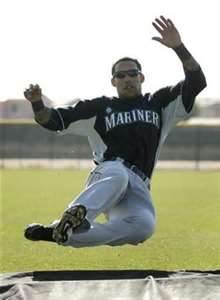 (1.) Your dominate leg, used in base sliding, should be extended, with the foot up off the ground as you slide. The difference here is the leg does not have to be extended forward and slightly bent, for cushioning, because there is no collision with the base. The leg out and foot up is used for balance and to prevent the spikes from catching in the turf.

(2.) The bare hand should be held over the head in order to prevent injury from becoming jammed into the turf. The difference here is, in base sliding both hands should be held over head, however, in attempting to catch the ball, the glove hand obviously must move to the ball.

(3.) Sliding into a base requires the runner to land and slide on his rear end and thighs, and be nearly prone as you slide, in order to give the fielder a small target to tag. When sliding to catch a ball it’s important to keep the upper body as high as possible, which keeps the head high, in order to see and track the ball, and allows for more mobility of the glove hand. 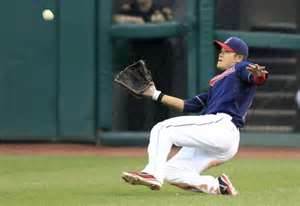 Ball On Glove Side

(4.) Stealing bases requires you begin your slide 5’ to 8’ from the base, but sliding to catch the ball is last resort, therefore the slide will be short and late. Remembering the scientific fact that the fastest way to the ball is by running through the ball, maintaining forward momentum, the only reason  a slide would be utilized when a player determines he can not catch the ball any other way.

(5.) Another difference in these 2 sliding purposes, is instead of trying to slide straight in to the base, shortest distance between 2 points is a straight line, the outfielder should try and angle his slide to where the ball will be on his glove side. Reaching across the body is a more difficult catch anytime, but especially if you’re on your butt sliding forward. 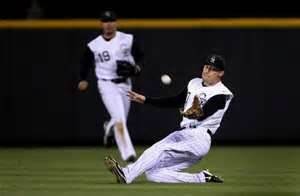 Notice The Back Up?

(1.) Have the players only practice the sliding mechanics while wearing their fielding glove.

(2.) Have fielders perform the sliding mechanics as you toss a ball to them.

(3.) The important aspect of this drill is to accustom the players to the mechanics of the play, catching the ball is a plus, but a poorly tossed ball by the coach is not the player’s fault for not catching it. 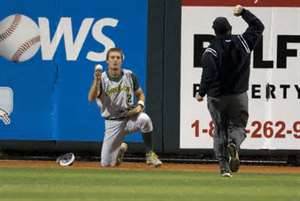 Finally: You have learned a few tricks of the trade which very well could result in you making an ESPN highlight catch, but you must make sure everybody else knows it. Anytime an unusually difficult catch is made or a catch which could have been shielded from the umpire, immediately display the baseball. This is not showboating, it’s allowing the umpire the opportunity to verify the catch, which he won’t say it, but he’ll greatly appreciate.

How To Coach Baseball to Coaching Baseball