Becoming so engrossed in Coaching Little League Baseball, we sometimes  forget how technical the game of baseball has actually become. When you consider the Official Rule Book is quite thick and, in my opinion, extremely complicated, there are always questions pertaining to “how to” or “how not to” perform something, then throw in each little league’s own supplement of rules and it seems you have a 4 year college course to learn.

Worse yet is sometimes we don’t even know we had a question until we are suddenly embroiled in a controversial call during a ballgame, then we realize we have no idea what the rule is.

I’m going to teach you some not so common situations, which either I have encountered or people have asked, which will give you an edge if and when it occurs to you. 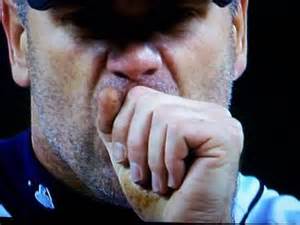 No Hands To The Mouth

If a pitcher goes to his mouth while on the mound, isn’t that a balk, even in Little League Play?

You’re a little mixed up on your question. Going to the mouth is never a balk. In your scenario, the pitcher’s hands are together, say in a set position, then he breaks the hands to go to the mouth, but that’s a balk for breaking the hands, not going to the mouth.

The OBR rule states, a pitcher may not go to his mouth within the 18 foot circle of the mound, a ball will be called.

NCAA rules say a pitcher can not go to his mouth while in contact with the pitching rubber, or a ball will be called.

We try to monitor our pitchers’ pitch count as well as having rules limiting innings pitched. As far as determining pitch count, is a hit a strike or a ball?

Although I applaud your concern for your pitchers’ health, remember K.I.S.S. ( keep it simple stupid) Hits are considered strikes in the box score and every pitch is counted as a pitch as far as pitch count.

Can a pitcher throw to an unoccupied base in an attempt to pick off a runner? For example Runner on second takes off for third and the pitcher throws to third without clearing the rubber.

ANSWER: No, believe it or not that’s a Balk. The pitcher must disengage from the rubber first, which makes him an ordinary infielder, then throw the ball to third. 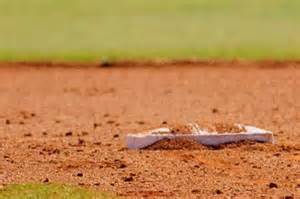 If a Coach, for whatever reason, goes to the mound after the pitcher has completed his warm ups, but before the umpire starts the inning, is that considered a trip to the mound?

No, it’s only a charged trip to the mound if the manager/coach stops play to go to the mound. As long as the coach is off the field of play before the umpire declares the start of the inning, normally “Batter Up,” It‘s not a chargeable trip to the mound.

Can a pitcher make a fake throw to first base when he’s not in contact with the pitching rubber?

This is sort of a Trick question. No, the only time a pitcher is allowed to make a fake throw to first base is after he steps backwards, disengaging the rubber, for a right handed pitcher that would be his right foot, left handed, left foot, and once his foot disengages backwards, the pitcher can do whatever he wants.

The trick part of the question is, if the pitcher has not engaged the rubber, he is a normal infielder, not a pitcher, and may fake a throw anywhere he wishes.

Can a pitcher be removed from the pitcher position to another position, then be put back to pitching?

If a pitcher is nursing an injury, Can a Pitcher wear an elbow brace?

Yes and No. A pitcher obviously would not be allowed to wear a brace on his pitching arm, because there’s a health issue with the arm and he should not be pitching, or it’s an intentional ploy of some sort.

He may wear an elbow brace on his glove elbow if it’s the same color as the uniform and is not distracting to the batters. An umpire can order its removal if he deems it distracting. 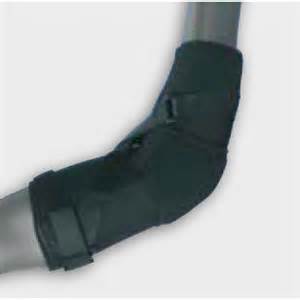 This is not a rule question, but a health concern. What type of pitch puts the most stress on the arm?

Any type of breaking ball, curve ball or slider. I’m not going into my believes on this subject as I cover it in other links, but I caution teaching these pitches too early.

With the Patriotic fervor in the country, Is it legal for a pitcher to have a flag on the finger portion of his glove?

The flag must be an original part of the glove and not an attachment or add on. (OBR rule 1.15) An umpire can still order the removal of the glove if he deems it distracting to the batters.

This may sound silly, but I’m thinking about making my players use wooden bats instead of aluminum. What makes a wooden bat break and how can I prevent it?

This is not a silly question and more coaches are considering switching back to wooden bats. There are numerous reasons a wood bat will break.

(1.) The obvious is an inferior or bad bat from the manufacturer.

(2.)  Bats have a tendency to break when the ball is struck on the handle, which is the weakest and thinnest part of the bat. When the pitcher throws a hard fastball inside on the hands of the hitter and the hitter is unable to get his bat through the hitting zone quickly enough, the ball hits the bat handle with incredible force causing it to shatter.

(3.) In order to produce large bats, yet maintain the same weight as smaller bats, the barrel is hollowed out or cupped, removing wood and weight from the bat. This cupped part of the bat, which is weak, will break if it strikes the ball in a certain way.

(4.)  Wood bats have grains, which indicate which side of the bat is weak, and is identified by the placement of the trademark. Always have the trademark facing you, or directly opposite of you as you hold the bat. This presents the strongest side of the bat to the ball when swinging. 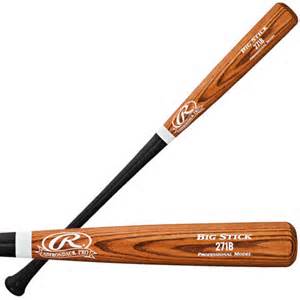 While we’re on the subject.

What do we learn by this? As a pitcher we learn that a properly placed high and inside fastball, especially had we been working the outside portion of the plate, will tie a hitter’s hands up preventing him from extending his arms and hitting the ball with authority. It may not always result in a broken bat, but a feeble ground ball is an excellent result.

From the hitter’s standpoint he obviously could not get his bat through the hitting zone quickly enough to make good contact on the ball. This resulted from one of two issues, either the batter did not open his hips quickly enough, which is where the explosive power and bat speed originates, or the batter has weak wrists and fingers which prevents a quick snap of the bat which drives the barrel of the bat through the strike zone.

How do I teach my players to run the bases?

Learning to properly run the bases is much more than simply having good speed and running with your head down. Players must be taught early on how to pick up their coaches for instructions as they run the bases.

If the runner is on first and the ball is hit to left center field, he can see the ball as he approaches second base and can determine if the ball is going to be caught, and if not, can advance to third base on his own decision.

However, if the runner is on first and the ball is hit to right field, the baseball will be behind him. It’s a ground ball so the runner knows he can advance, but how far? He doesn’t want to try and twist his head around to locate the ball, because it will totally disrupt his running stride and slows him down.

Therefore, he must learn to pick up the third base coach, who is looking directly at the ball, for instructions for holding at second base or advancing on to third base.

Communication between runner and coach is a combination of voice and hand signals, and the older the players, which can mean playing in larger complexes with more vocal fans, voice communication becomes less effective, however, is still used.

Hand and arm signals are the primary communication technique and a coach should do everything in his power to quickly and unmistakably, convey his instructions to his runners.