Teaching some Catcher Skills initially may seem senseless or down right barbaric, but they each are designed to address a specific problem, skill improvement or mental issue.

Most of these drills are unfamiliar because the need for the drill was performed at a very early age, position specific or only during a designated period of time at a practice. Let’s learn a few skill drills you may not be aware of.

The number one human emotion which prevents a player from becoming a good catcher is the fear of being hit and injured by the ball or bat, which are addressed in two different ways to address two different fears, but this fear will stop a catcher from aggressively playing the position, make him tend to blink prior to catching the ball, forces him to set up 5 feet behind the batter and can ruin his desire to catch, no matter how much he wants to play the position. 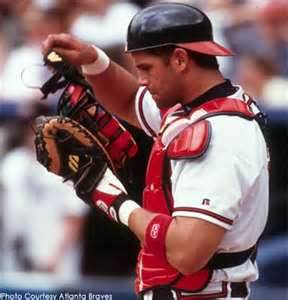 It's Important to Wear All Protective Equipment

The human emotion of fear, is a learned emotion, as it’s not natural to be fearful, or else a young child would not be tempted, and unfortunately sometimes successful, to touch a hot stove. That’s why some players have no fear of catching, while others do, as they have somehow learned to fear the position.

The only way to remove this fear is to demonstrate to the player’s mind, where the fear originates, that there is no reason to fear the ball. Respect...yes … Fear.... No.

Fear Elimination Exercise: The intent of this drill is exactly what the label says, it’s designed to eliminate the fear of being hit with the baseball. This drill, properly performed, is not nearly as barbaric as it may first appear, and the coach adding a little humor to the drill will help immensely.

(1.) Have the player wear his full compliment of protective equipment and insure everything is correctly installed and fits properly.

(2.) The coach carefully explains to the player the reason for the drill, to show the player there’s no reason to fear being hit with the ball as it does not hurt, and exactly what will happen.

(3.) Next, have the player position himself in the catcher’s box, but remain standing, with his arms folded behind his back or clenched in a fist in order to protect them. He’s to be re-instructed not to catch the ball, but instead let it hit him.

(4.) The Coach should stand 20’ to 30’ away from the front of the catcher and begin throwing rubber balls, tennis balls can be used, but are not quite as good for this drill as it is a mind game and the player very well may not fear a tennis ball, but rubber balls are not as common place, at the catcher.

(5.) As the player becomes accustomed to being hit, increase the speed of the pitches.

(6.) After becoming comfortable with being hit, have the catcher assume his squat position and continue hitting him with the rubber balls as you increase your speed.

Hit the catcher everywhere, but especially the mask and chest area. Most players adapt, having less fear, after just one drill. Others more, some never. The never ones aren’t catchers anyway so change their position.

1. As a Coach be absolutely sure the player wants to catch and not mom, pop or you. If he’s sincere he’ll actively engage in the exercise.

2. Stop the drill immediately if the player balks at continuing.

3. It’s not a bad idea to let the parents know of the drill ahead of time, instead of Johnny going home and telling his parents you abused him all practice. 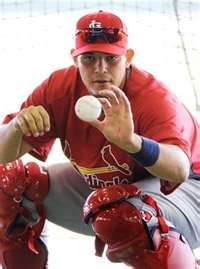 Molina - One of the Best Defensive Catchers in Baseball

In this drill you will teach the catcher to become accustomed and adept at using one hand to catch the baseball and also teaches them to protect their throwing hand.

(1.) Have your catchers position themselves 5’ to 6’ feet apart, facing one another and in their squatting position.

(2.) Have them toss a tennis ball back and forth to one another using only their bare catching hand to receive the ball. This helps create “Soft Hands” as the tennis ball will bounce out of a “Hard Hand,” which immediately indicates the catcher is either stabbing at the ball, or not allowing his arm and hand to absorb the energy of the pitched ball.

(3.) After chasing the ball a few times, or being the only player not consistently catching the ball, the player will either learn to adjust accordingly, or he made need special coaching or removed from the catching position.

(4.) Be sure they are holding their throwing hand behind their back as they perform this catching drill as it’s a two fold learning process accomplishing 2 goals with 1 drill.