However, there are instances, such as a missed suicide bunt, a relay throw beating the runner so badly to the plate they stop, a stumble and probably a dozen or more other events which could result in a rundown.

Therefore, although possibly Uncommon, it does occur and the catcher must know how to execute the play properly. 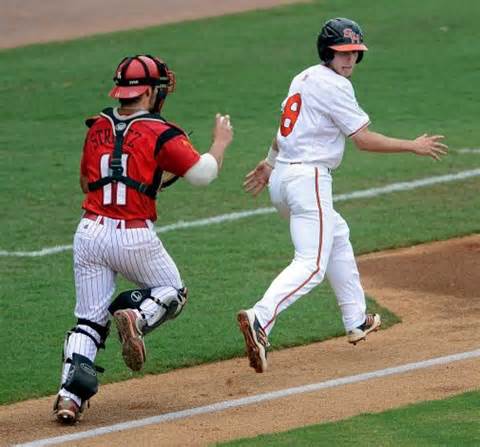 The number one Cardinal Rule of a rundown, regardless of who is involved, is to Always force the runner Back to the Original Base they came from. That way, in the event the play is not properly executed and the runner is not put out, he ends up back at his original base and does not advance or score.

Let’s look at the steps in properly completing a rundown play which results in an out.

The runner has stopped his forward motion towards the plate, either by a screeching halt or otherwise. It doesn’t matter where the runner is located, 10 feet away from you or 40 feet away, your first step is to run directly at him.

This will force him to initiate movement back towards third base, in order to avoid being tagged by you, which is exactly what you want.

(1.) If the runner is already returning to third base and you feel a throw will not beat him back … don’t throw the ball. Nothing but bad can happen.

(2.) Don’t throw the ball if he’s close enough to you that you can run him down and tag him yourself.

If throws are required … the ideal number of throws involved in a rundown is an astounding ONE - UNO - 1 !!

Your job is to make the player run as fast as he can away from you and towards your awaiting team mate, probably the third baseman. Once he’s running full speed he Can Not stop and reverse direction before the third baseman, who has caught your throw and is moving forward, tags him out. 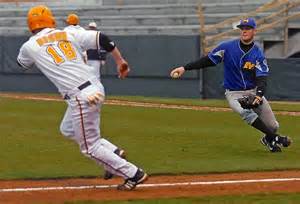 Catcher Rundown - Forcing Him To Sprint

When you begin running and forcing the runner to return to third base, run on the infield side of the foul line, which is your throwing hand side, foul side if you are a left handed catcher. This serves several purposes;

1. Keeping your throwing hand to the outside of the runner offers you a clear throwing lane to your team mate. Running to the foul side or directly behind the runner forces you to throw the ball across the runner’s body or over his head. This is a formula for disaster as the ball could strike the runner or your team mate could lose sight of the ball.

2. While running, hold the ball out away from your body at shoulder height. This allows the third baseman a constant and unobstructed view of the ball and the ability to see when you throw it.

Force the base runner to run as fast as he can back towards the original base, third base in this instance.

Display the ball shoulder height held away from your body while running on the infield side of the foul line. Run on the foul side of the line if left handed.

Throw ball to team mate to complete the play.

1. It’s important to know when to make the throw, which depends on different variables such as runner’s speed and/or proximity to the base. Throw too late and the runner may be able to avoid the tag by running past the third baseman or sliding to avoid the tag.

2. It’s important to throw the ball at the proper speed. Never lob the ball, but don’t throw the ball full speed if you’re only 10 feet away from the third baseman.

The rundown is not a difficult play if executed properly. However, we have all witnessed rundowns which resembled a ping pong game of back and forth throws and those usually did not end well for the defense.