Blocking wild pitches is an extremely important part of being a great catcher and I’m not only referring to the physical aspect of keeping the ball from getting by you, but also the increased confidence your pitching staff will have in your overall abilities.

A catcher who can gain the trust of his pitching staff, and his coach, that the pitcher can throw a breaking ball into the dirt, a purpose pitch or accidentally, and the catcher will stop it preventing runners from advancing has achieved something 90% of all catchers will not. 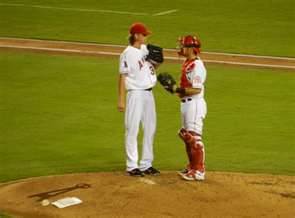 The natural Mental and Physical toughness a player possesses the better his chances of succeeding as a catcher, because a player can not be afraid to put himself in harm's way of the ball, and be a catcher. The great thing about this huge negative is a player can be taught the skills required to be a catcher, thus eliminating his natural fear of the ball.

Number one, the catcher must be able to imagine his entire body is a back stop, a barrier, or wall if you will, which nothing gets past, using his mitt to catch the pitch, his mitt and his body to block the pitch.

This “wall” image of himself is not as easy to do as one may think, as the brain will automatically tell the body to attempt to catch the ball, no matter where it is located, which is contrary to what he must will himself to actually do. 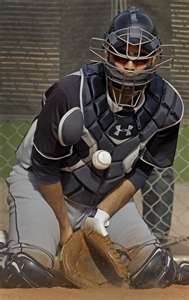 Skill One: When a Ball is thrown into the dirt in front of the plate, fastball or breaking pitch, does not matter, the catcher does not hesitate to see where the ball may bounce in order to determine if he can catch it with his mitt. In fact the thought of catching the ball doesn't cross his mind ... his mindset is "Stop the Ball."

He immediately drops from the squat, or ready position onto his knees, placing his mitt on the ground in front of his crotch presenting a solid obstacle with no holes, in which to block any ball from skirting between his knees or under the glove. In order to deaden the ball, he should lean slightly forward, creating the letter C, so when the ball hits him in the chest protector it will bounce straight back out in front of the catcher and stop.

Skill Two: When the pitch is low and wild right or left, whether in the dirt or not, the catcher should not attempt to swipe at the ball with a back hand motion of the mitt, as a little bit of luck is always good to have, but this is not about luck, it’s about the proper fielding method to stop the ball.

Number one, you’ll probably not make contact with ball by swiping at it, but if you do, due to the arm motion required to make the swipe, you’ll probably slap it either left or right, out of your reach, allowing runners to advance.

The Correct procedure is, from the squat or ready position, you must leap frog your entire body to the right or left side of the plate in order to position your body to where you’re facing in front of the ball. As you leap frog sideways, never try to land on the balls of your feet, then drop, always leap frog and land on your knees, glove on the ground in front of your crotch, slightly leaning forward. 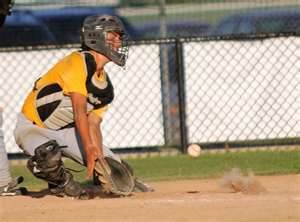 Wild Pitch Blocking Drills: Any catching drills should include all catchers rotating, in order to prevent fatigue from setting in too quickly.

Always have the catcher wear his full compliment of protective equipment, regardless of the drill, and have him assume his normal catching position behind home plate.

(1.) The coach stands 25’ to 30’ in front of him, in line with the pitchers mound, and throws medium speed balls into the dirt in front of the plate, which the catcher is to block using the proper form.

(2.) As he becomes accustomed to the drill and more skilled, increase the speed of the throws, still bouncing them in front of the plate.

(3.) Finally, mix it up so the catcher is not able to anticipate where the ball will be and begin cheating a little bit, as the drill is intended to prepare the catcher to react to the unexpected.

Bounce a medium speed throw in the dirt, then throw three fast ones which bounce in front of the plate, then throw a strike or two strike down the middle, throw a high ball. You get the idea.

Drill Two: Have the catcher assume his normal catching position, facing the pitching mound, while you position yourself 25’ to 30’ down the first base line.

Throw medium speed balls in the dirt aimed at his left knee, as this will require him to leap frog and turn his entire body to his right and assume the blocking position. Increase speed as he becomes better. 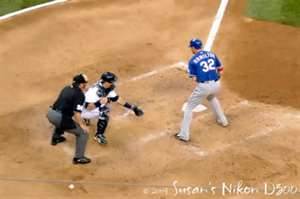 Drill Three: Same intent, teaching the catcher the mechanics of leap frogging, and positioning, except you're standing down the third base foul line. With Catcher facing pitcher, throw balls in the dirt aimed at his right knee, which will require him to turn his body to the left.

The reason we train the catcher to learn an exaggerated leap frog maneuver, as he would not normally turn as much, is based on solid teaching strategy, such as if you can catch a ball bare handed, you’ll be better than ever with a glove.

Drill Four: The final drill is known as the Goalie drill and adds a bit of spice to the action as the catcher will be protecting a designated area.

Position the catcher between two fence posts which will represent a hockey goal net. Stand 25’ to 30’ away and throw balls in the dirt in front of him and both sides within the confines of the two post goal.

Mix the pitches up, bouncers, strikes, high pitches, as this will enhance his ability to react without thinking, and Speed and instinct are essential if you’re trying to position yourself correctly to stop a 90 mph slider.