With Bases Loaded, it appears a runner doesn’t have to think too much, other than just don’t get picked off and run as fast as you can when the ball is hit, plus it helps if you know which way is forward, if you don’t… follow the runner in front of you.

Makes base running appear quite simplistic, but by now you know to be suspect of anything in baseball which appears to be easy or simplistic, as it rarely is, as you probably haven’t heard the whole story or it was explained to you wrong. Such is the case with base running.

I’m going to teach you the basics of good base running and possibly surprising to you, that does not begin with sheer speed, as speed without knowledge can actually be detrimental and counter productive.

1. Beginning at the same point;

Can you beat the underhand toss? No, and that ought to be a sobering thought that speed, although very important, is not always the trump card.

There are rules in base running, but I always hesitate to use the word rules, because there always seems to be an exception. I prefer to use the term there are Very Strong Suggestions to follow when running the bases.

Suggestion One: Never try to advance when the ball is hit in front of you, except, in the case of a force play when you must try to advance. This is intended for base running situations where you are a runner on second base and a ground ball is hit to the left side of the infield, shortstop or third baseman, you do not try to advance to third base. This applies even with 2 outs.

1. You are in clear view of the infielders, so surprising them is not an option;

2. You must assume the shortstop and/or third baseman will cleanly field the ball and since you’re the lead runner, the shortstop will either tag you out as you try to get by him, or make the short throw to third base for the out;

3. Don’t try to advance even if there is 2 outs, because you’ll be an easier out than making the fielder throw across the diamond to the first baseman;

This is what’s referred to as “running into an out.” 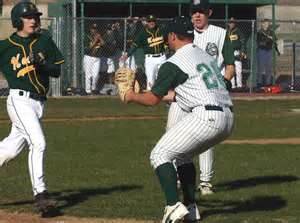 Suggestion Two: Never get Doubled up on a Line Drive.

Any base runner on a line drive ball, regardless of which base he occupies, must be disciplined enough to hesitate a second in order to insure the ball gets through the infield and is not caught instead.

This is an ambiguous suggestion, which actually counters the rule base runners are taught of running on contact, but as always, there’s an exception. A runner who takes off on contact when a line drive is hit risks the chance of being doubled up regardless of how fast he attempts to return to the base. 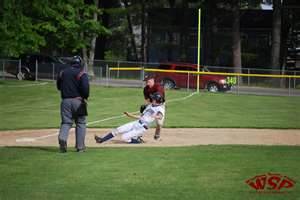 Suggestion Three: Playing it Halfway: When you’re a runner on first or second, with less than 2 outs, any fly ball hit to the outfield which you question whether it will be caught or not, you advance half way to the next base and wait.

Should the ball drop, immediately advance to the next base, but should the ball be caught, immediately retreat to your original base and do it quickly. There’s no sense taking a chance of getting doubled up by a strong armed outfielder when you’re not going anywhere anyway. 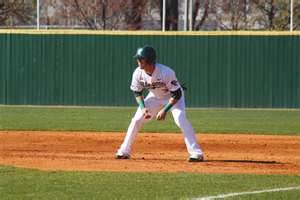 There is absolutely no reason to go halfway, because if the ball drops, you can trot home from third base, and if it’s caught, regardless of how deep the ball is hit, if you must retreat to the bag because you went halfway, you’ll never be able to tag up and score.

Suggestion Four: Ball hit behind you:

If you’re a runner on second base and a ground ball is hit to the right side of the infield, second or first baseman, you instantly advance to third base. This is what’s referred to as a ball hit behind you.

You know the hit is a ground ball, so there’s no running into a line drive double play, and the throw from the right side infielders is too long to make in time to get you out at third, assuming you’re running hard.

The same principle applies for a runner on third base, any ground ball hit to the right side of the infield, you will instantly break for home plate and attempt to score. 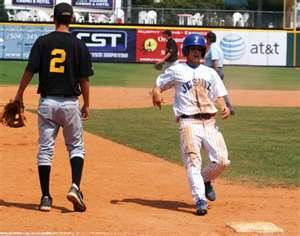 There is a caution on this rule, especially if you’re on third base with less than 2 outs and represent the tying or winning run. Should the defense be drawn in, playing much shallower than normal, with the intent of being able to throw you out at home plate on a ball hit to the right side, you must consider the speed the ball is hit whether you try to score or not.

Should the infield be playing in and the ball is sharply hit, it’s probably wise, there’s always additional variables to consider, to hold up and not try to immediately score.

The risk of being thrown out is too great, as you will still have an opportunity to score because there’s only 2 outs, and if the ball gets through the drawn in infield, a negative for drawing the infielders in, you simply walk home and score. 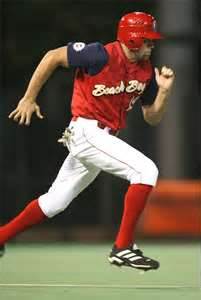 Summing It Up: You can pretty well sum up a good base runner as a runner who is always conscious of his current situation.

1. He knows he’s the fastest runner on the team, but the slowest runner is on base ahead of him and he doesn’t want to run up his own team mate’s back.

2. He knows how many outs there are, and if he’s in an “infield fly rule” situation, he won’t run hard on an infield fly, but if there’s 2 outs, he’ll run for all he’s worth because he knows the rule does not apply with 2 outs.

3. He will take that extra minute to pay attention to the opponent’s outfielders as they warm up, noting who has the strong throwing arm and who doesn’t, which could affect a critical decision of challenging an arm or not later in the game.

It’s important that all players are taught they can become good base runners regardless of their foot speed, even with bases loaded.