In this segment of learning baseball rules we’re going to tackle the confusing issue of making an Appeal of a play and we’re not talking the familiar Catcher appeal of a “Check Swing or Not,” which you may see several times in a game, but rather the little used, therefore often misunderstood appeals of certain plays or situations. 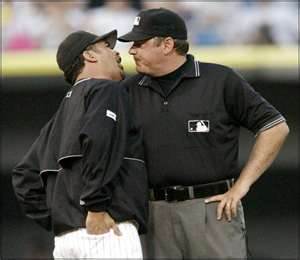 Rule 2.00 Appeal, 7.10 explains an Appeal as an act of a fielder in claiming the offense violated a rule of some sort such as, failing to tag up before advancing on a caught fly ball, not tagging the base before continuing to the next base or a hitter batting out of order.

Rule 5.11 states an appeal can not be attempted when there is “Time Out,” it can only be made when the ball is in play. In order to put a ball in play after a time out, is for the pitcher to have possession of the ball, making contact with the pitching rubber, and the umpire says “Play” or “Play Ball.” Thus beginning play again.

Should the ball still be in continuous play, in other words the action has not stopped on a play, and the umpire has not declared “Time Out” or “Dead Ball,“ Any defensive player, not restricted to the pitcher, because the ball is still alive, may make an appeal. 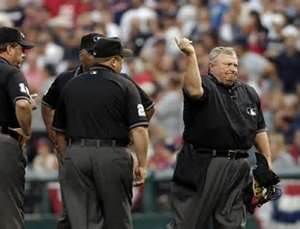 Methods of Making an Appeal:

The player must have possession of the live ball and verbally or physically indicate to the umpire he is making an appeal of a play, the umpire may understand the player’s intention, but he must insure the player knows and acknowledges what he’s attempting to appeal. These methods include;

1. Touching the base they believe the runner missed when advancing;

2. Touching the runner whom they feel made the infraction;

3. Or touch the Original base that the runner left before a fly ball is caught.

Here’s a little tip, if your player makes the mistake of appealing a play before the ball is placed back into play, that does not eliminate the chance of making the appeal, it just must be done again, only properly.

The Pitcher Puts The Ball Back Into Play 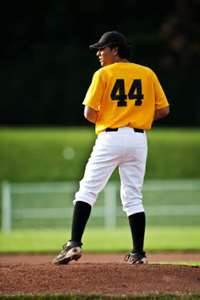 This can be a sticky situation for players unfamiliar with the procedure, so let’s learn how to properly perform the appeal

(1.) The ball is returned to the pitcher and while he’s in contact with the pitching rubber, the umpire declares the ball alive, by saying “Play Ball.”

(2.) The pitcher must disengage the rubber by stepping backwards off it with his rear foot, before making a throw to the base the appeal will be made. Should the pitcher commit a balk as he throws to the base, the appeal is voided and all other appeals are lost.

(a.) A pitcher can throw to a base while in contact with the rubber, but why risk a balk when disengaging allows him unlimited movement.

(3.) In All appeal plays the act of an appeal must be unmistakable. In other words catching the ball and appearing to accidentally touch the base is not good enough, the player must show complete intent of stepping on the base. The best method is to physically and verbally demonstrate to the umpire your intentions. 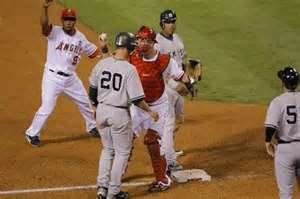 Loss of Appeals: Appeals must be made prior to the next pitch or play or the defense forfeits their right to all appeals. The appeal play itself is not considered a play, therefore if there are 2 appeals and the first appeal is denied, the second appeal can still be made by repeating the process, and a throw to an unoccupied base from the rubber is not a balk if performed as a part of the appeal.

The Defense loses its right to appeal if any of the following actions occur:

(4.) If a throw made as part an appeal to a base is wild and the ball ends up in “Dead Ball Territory” or “Out of Bounds,” this is considered an error on the appeal and is declared a play, which voids all appeals.

Let’s determine the definition of continuous play, as it directly affects the method we may have to implement in order to appeal a play. 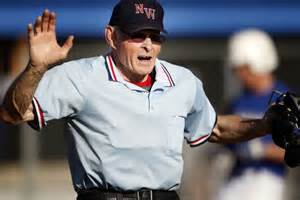 “ Continuous play is action which is uninterrupted of play progression, starting with the delivery of the pitch, and normally ending when all runners stop trying to advance and an infielder has possession of the ball.”

(1.) A runner begins at first base and advances to third base on a hit ball, where there is a play on the runner who is declared safe by the umpire.

(2.) The second baseman believes the runner missed second base on his way to third and calls for the ball.

(3.) He tags second base and tells the umpire he’s appealing that the runner missed second base.

(4.) The appeal is granted or denied.

Remember the ball must be live in order to appeal, as it’s quite common for a base runner who slides into a base to immediately ask for time out, which may be granted before the appeal can be made on a continuous play method.

There are plays which we normally don’t consider appeal plays, but are. For example;

(1.) A runner on first base with a rather large leadoff. 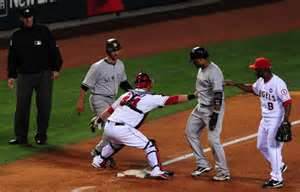 Here’s one I bet you’ve never heard of.

(2.) The batter attempts to bunt, but pops the ball up;

(3.) Both runners are off and running at contact so neither returns to the base;

(4.) The pitcher catches the pop up, for out 2, and throws to first base before the runner can return for out 3.

(5.) The runner who was on third base crosses the plate before the 3rd out is made at first base.

You’d assume the run would not count as the third out was made during a continuous play, but you’d be wrong.

Ruling: If the defense leaves the field without appealing the run scored, it counts. However, if the defense appeals the play at third, by throwing to the base and tagging it in an obvious appeal, before the last fielder crosses the foul line, the runner on third is declared out and the run does not count.

This is what’s known as “an apparent fourth out.”

I sincerely believe this lesson on properly making appeals will prove useful to you sometimes down the road.