Baseball - The Game At A Glance


Baseball is much more than a game, as it has greatly influenced our, and many other countries’ cultures, where young children choose a certain  team(s) which they follow and root for their entire lifetime. The game is a deep seeded thread which weaves in and out of our ups and downs in life, always leaving us the hope of next year being our championship time.

There have been volumes of stories and movies created depicting the game from all different aspects, from serious to humorous, from breaking down historic civil rights to the seedy side of illegal organizations skirting the fringes of the game seeking to gain a foothold. 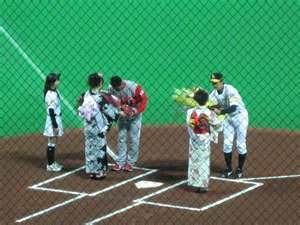 No matter how magical the influence Baseball is upon our daily lives, and acknowledging it is a multi-billion dollar industry, it is still just a game, with rules, regulations and basic playing and equipment required, which produces bland and boring reading. But without knowing the general elements of the game, you can’t ever learn and enjoy or appreciate the entire “behind the scenes” strategy and full spectrum of the game. I’ll try not to make it too boring.

(2.) The object is to score more runs than the other team within the set time span, but unlike most sports, baseball, at the upper levels of play, have No time limits, the game could and has lasted 6 to 7 hours and longer.

(3.) The game is consisted of a set number of innings, usually 9, and the game does not end until the 9 innings are played regardless of how long it may take. 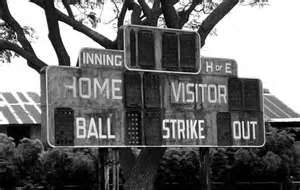 (1.) A team consist of 9 players who play the field and bat, and although the team may have more than 9 players, which is most often the case, only 9 may play at any 1 time.

(2.) The teams rotate taking turns playing offense (hitting) and defense (fielding) and the completion of one of these cycles, they both complete their turns, this constitutes an inning. 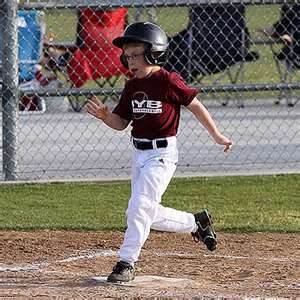 (1.) In order to score a run, a player must complete a circuit of moving safely around three bases and back to the original starting point (Home Plate) in order to be considered a run.

(2.) This is accomplished when the batter, who starts by batting at home plate, gets safely to first base, then advances to second, then third base and eventually returns to home plate where he began, thus being counted as a run.

(3.) The more times a team can complete this journey, the more runs they are credited with and the team with the most runs at the end of the game … wins. 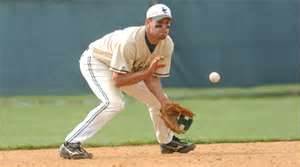 (1.) While the hitting team is trying to score runs, the other team, referred to as the defense, is trying to stop any runs scoring.

(2.) They accomplish this by obtaining 3 outs, which is essentially stopping 3 hitters from reaching base safely or getting a base runner out by other means.

(3.) Once they obtain 3 outs, the inning ends and any runner which had not scored, completed the circuit, can not count.

(4.) That ends the inning and the teams switch positions. 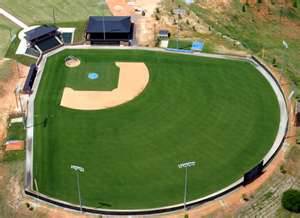 The area on which the game is played is called a ball field, with lines, extending from the back tip of home plate, at 45 degree angles extending outward until they reach the end of the playing area, which varies in distance depending on the age of the players.

These 2-45 degree angles produce a 90 degree angle, which is identified with white lines, known as Foul lines, and everything hit within the area is considered a Fair ball, and anything hit in the remaining 270 degree area, outside the foul lines, is considered a Foul ball. A batter can only hit safely if they hit the ball into the fair territory portion of the diamond, but can hit into an out if the ball is hit in the foul territory portion. 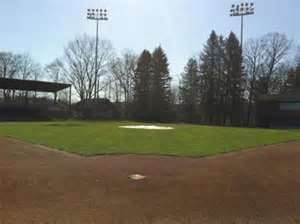 (1.) The area consisting of the 3 bases and extending several yards past the bases in all directions, is called the Infield.

(2.) Players who are defensively positioned in this area are known as Infielders, and although the pitcher and catcher are at times not referred to as an infielder, by rule they are.

(3.) In the middle of the infield, in a direct line from home plate extending to second base, is located the pitcher rubber, where the pitcher pitches from.

(4.) The Pitching rubber, which is technically called the Pitching Plate, but  it’s made of rubber, thus the nick name, is centered on top of a raised mound of dirt, called the pitching mound.

(5.) Ball diamonds intended for younger aged players will not have a raised pitching mound. 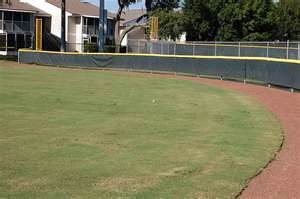 (1.) The area beyond the infield and extending to the farthest boundaries of the baseball park is known as the Outfield.

(2.) The 3 defensive players positioned in this area are known as Outfielders.

(3.) The outfield normally is enclosed with a barrier, of various heights and materials, which indicate the end of playable fair territory.

(4.) Any ball hit over the barrier on a fly is called a “Home Run” and is counted as a run scored.

(5.) Any runners on base when the batter hit’s a Home Run, also scores a run.

(6.) Some youth fields do not have these enclosures therefore technically the field runs forever, but that’s not realistic. 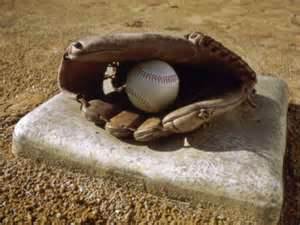 There are numerous pieces of specialized equipment and training aids utilized in baseball, but there are Three (3) Basic Tools used to play the game of baseball, which are the Ball, Bat and Glove.

Ball: The baseball measures 9 inches in circumference, has a rubber or cork center, which is wound tightly in yarn, then the entire insides are wrapped in white cowhide and sewn together with red stitches.

All official baseballs are made by the same standards, including balls which are made smaller in size to accommodate the hand size of players in youth baseball leagues.

Bat:  The bat is an instrument used by the batter to strike the ball as it’s pitched to him. Professional leagues use bats made only of wood, although the types of woods can vary.

The typical bat is a hard round tapered stick, which about 2.5 inches round at the hitting end and tapers to @ 1 inch at the handle, which has a larger sized knob on the end of the bat in which to keep it from slipping out of the batter‘s hands when swinging. Lengths generally fall between 34 and 42 inches long, but never longer, and weights can vary significantly, but always on the lighter side.

Glove: The glove or mitt, depending on the player’s position, is a tool which aids the fielders in catching the ball. All Gloves are made of leather, which is formed, normally into a hand shape, to the specific requirement the glove will be used for, padded then stitched together with leather laces.

The glove was the last of the 3 pieces of equipment to be developed and used as early baseball pioneers fielded the ball bare handed and the use of a glove was considered unmanly.

However, when the catchers began using mitts, in order to protect their hands, and the glove began greatly improving the defensive play, everyone decided a glove was a pretty good idea and wanted to use one.

The problem was, Gloves were very expensive, and since they were brand new and few leather manufacturers produced them, they were also in short supply. Therefore teams began sharing gloves with the opposition team while playing the game.

For instance, at the end of an inning, the left fielder would remove the glove and leave it in left field while he came in to bat, and the opposing player would then use it while playing defense, placing it back on the grass when returning to bat.

The game of baseball is much more complicated than I’ve described, but learning the basics provided will launch you into a better understanding of the game and the events behind the scene which influence how the game is played.

Are You Really Serious About Increasing Your Pitching Velocity? 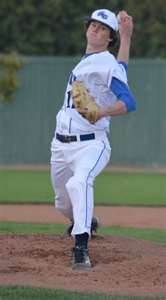 You Owe It To Yourself To Check Out This Program