Teaching Numerous Baseball Positions is knowledge intensive. A lot of baseball websites offer limited Drills, which is actually quite an ambiguous statement, as baseball drills could take one of a thousand forms dealing with a thousand different skills. Be quite careful of the sites offering drills with no explanation of the intent or skill it’s actually meant to address.

As the old saying goes “There’s more than one way to skin a critter,” I attempt to teach by being repetitive, yet from different angles or points of view. Just like a good algebra teacher, if the student doesn’t understand how X=Y, he teaches Y=X. Same answer … different approach.

We’re going to begin our Baseball Practice Drills concentrating on developing skills on how to properly play the baseball positions of infield.

The very first step of playing the infield is to learn how to catch a ground ball, because that’s the majority of the job, and that begins with learning the Proper Fielding Position.

It should go without saying, but you must coach everything, the main purpose of the fielding stance is to best position yourself to catch the ball. A ground ball … is exactly that. It’s a hit baseball which scoots and bounces along the ground, so you would think automatically getting low to the ground would be the best move. 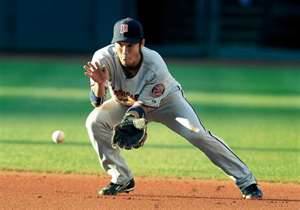 However, I’ve witnessed many infielders, of all ages, standing straight up as the pitch is delivered. No, No and No !!! I’ve wanted to scream. Other than standing there with your eyes closed, or your back to the infield, this is the Worse beginning fielding position an infielder can have.

Standing upright, stretching and surveying the field is fine, as long as the pitcher is not ready to pitch, but the second the pitcher makes contact with the pitching rubber, he has begun the process of pitching by acquiring the signal from the catcher, and then going into his windup.

At this point, you should be attentive, back slightly bent forward, hands out in front, and as he goes into his windup you should go into your full fielding position.

(1.) Your knees and back are bent enough to allow your hands to touch the ground, your glove is actually touching the ground.

(2.) You should be able to see your glove out in front of you, if not, your holding your glove too deep under you which will result in a blind spot where you can’t see the ball enter the glove. If you can’t see it happen, then it’s guess work, and that leads to bad things happening.

(3.) You're on the balls of your feet and are slightly leaning forward, while your head is straight up and you watch the baseball from the pitcher’s hand to either the catcher’s glove or to the hitter’s bat. 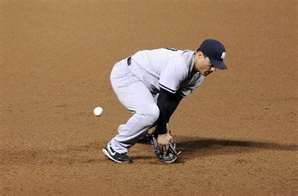 There are a few basic fielding steps for catching a ground ball hit directly at you.

(1.) As the ground ball approaches you, stay Down on the ball, that is, maintain your crouching position with your glove on the ground out in front of your body where you can watch the ball all the way into the glove.

I have seen so many times where the fielder will not stay down and watch the ball all the way into his glove, only to raise up too soon and have the ball go under his glove, through his legs and out into the outfield.

(2.) The proper method is to keep your butt down and watch and feel the ball enter your glove, which leaves nothing to chance or guess work.

Crank It Up a Notch

There’s a fallacy that a ground ball hit directly at you, because you don’t have to move your body much, is easy to field, but that’s not only not true, many times it’ll be just the opposite, such as the ground ball which is hit hard and is bouncing in a low trajectory.

This type of groundball, because of it’s erratic and normally low skipping hops, can cause a second of hesitation of how to proceed to try and field the ball.

If you’re indecisive, allowing the mind to hesitate for a split second on whether to charge the ball and take a chance on fielding it, or backing up to field it on a bigger hop…. you’re in deep trouble. 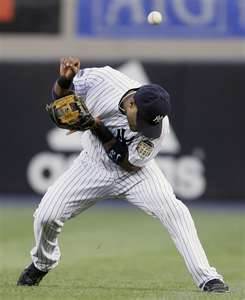 In situations like this you’ll stand a 99% better chance of being able to field the ball if you charge it, as You’ll be moving forward with your glove down close to the ground. From this fielding position there are normally three things which can likely happen.

One,you’ll field the ball on the short hop. You’ll be moving in toward the ball which will shorten your throw to first base, resulting in an easy out.

Two, the ball will take a crazy hop and hit you in the chest. Since you’re low and bent forward you’re in a similar position which a catcher takes to block the ball and keep it in front of him. Chances are the ball will bounce off your chest out in front of you where you can pick it up and still make the throw to first for the out.

Third, the ball can go between your legs, or kick sideways off your glove or foot, for a base hit.

Now, let’s look at backing up on the ball, or as they call it “Letting the Ball Play You.”

If you play the ball this way there are normally a few of things that can likely happen.

One, the ball will take a lucky bounce and end up in your glove. I say a lucky bounce because, unless you have tremendously quick hands, the speed the ball is traveling and the erratic bounce it takes, pretty well eliminates the ability to move your hands that quickly.

So you catch the ball and make the put out.

Two, as you’re backing up you’re standing erect, weight back on your heels and somewhat off balance, which prevents your ability to quickly change directions. You are at the total mercy of the baseball, and there’s a baseball saying for that …

“The Ball Will Eat You Up,” referring to your lack of control over the situation, where the ball most likely will skid under your glove and between your legs. Or the ball will take an erratic bounce, hitting you in the shins and causing you to trip over your own feet and fall flat on your backside.

In case you haven’t caught my drift yet …. As a general rule, You are always better off charging the baseball.

By charging the ball you are controlling and anticipating rather than defensively attempting to adjust to an erratic bounce, and if you boot the ball you’ve kept it in the infield which can be invaluable in certain situations.