Baseball Indoor Drills is designed to combat inclement weather which can take a heavy toll on a practice schedule, pre-season as well as throughout the season. Just like the mail service, rain, sleet, snow a baseball coach must train his team.

Here are a number of drills which will increase hitting skills, yet can easily be performed indoors. 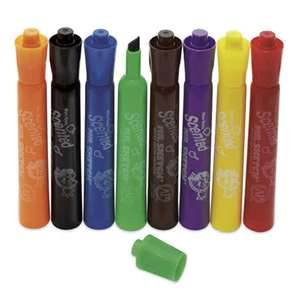 Many coaches will argue the First Step in hitting a baseball is a fundamentally solid batting stance, swing or starting mechanism, and although these are extremely important, I respectfully disagree with my colleagues.

I believe the First Step to hitting a baseball is … To Be Able To See It. You can’t hit it if you can’t see it and by seeing it I mean:

A. See the Ball beginning at the pitcher’s release point.

B. Seeing and Identifying the Pitch.

C. Track the Ball all the way to the catcher’s mitt.

A minimum of Three Baseballs, (practice balls are fine)

Utilizing more than 3 baseballs will greatly enhance the benefit of the drill.

Using a 3 different colored markers, trace along the baseball’s seams, leaving a wider than the seams, colored line around the ball. 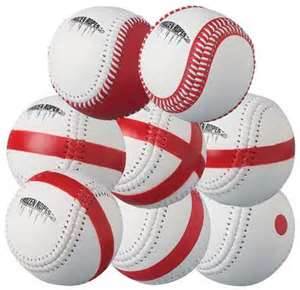 Another Option For Identification

If you are going to attempt to throw the pitch the color calls for, it is Best a Coach pitch this drill in order to protect a pitcher from the risk of injuring his arm throwing too many curve balls, especially early season.

It is not necessary to throw the different types of pitches, as the drill is intended to train the eyes to quickly identify the baseball’s color.

The Batter, with bat, takes his stance at the plate, the catcher can be dressed in full protective equipment or just a mask. I always recommend full gear for the catcher, not always for protection, but to have the gear become a second skin to the player.

(1.) The pitcher will deliver the type of pitch indicated by the color of the ball he has gripped.

(2.) The Batter will call out the color of the ball the instant he recognizes it and then the type of pitch as he follows the ball all the way into the catcher’s mitt, where he’ll see if he was right or wrong.

This drill is intended to teach the hitter to pick the ball up out of the pitcher’s hand and identify the type of pitch as soon as possible, and no different than other muscle groups of the body, the eyes too require repetitive training in order to develop memory.

This drill has many variations which can be customized and incorporated into your particular scheme. Additional colors can be added for additional types of pitches, such as slider or knuckle curve, and 3 to 100 baseballs can be used. 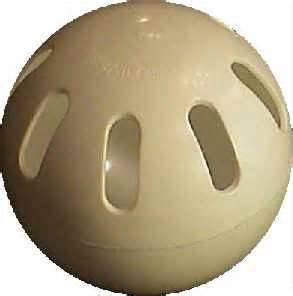 The baseballs for this particular drill are normally colored in between one of the baseball’s stitch patterns instead of along the seams. I like using the colored seams as it allows the hitter to learn the actual seam rotation of a particular pitch.

Run a string through the holes and secure with a piece of tape or push pin, preferably in a doorway or a place where there is moving air to assist the ball to spin. Twist the string tightly, then release. The player, standing 4 - 5 feet away attempts to identify the three Capital letters as quickly as possible.

This is an excellent exercise for training the eye to not only focus on an object, the letters, but also perform it on a moving object, which is similar to picking up the rotation of the seams as the pitch approaches.

Another drill is what I call Hitting With Your Eyes Closed:

The intent of this drill is to increase the speed and accuracy of eye to brain to bat to ball procedure. The player is to merely close his eyes, not squeeze the eyelids shut, as that distorts the vision requiring time to correct itself. 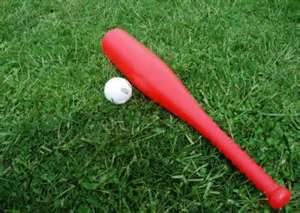 A large Whiffle ball is initially required for this drill, but as skill increases a rubber or tennis ball can be substituted.

The batter assumes his normal batting stance, but keeps his eyes closed. The coach positions himself off the plate and will soft toss the ball up into the strike zone. As soon as the coach releases the ball he says “Open” or “Now” or whatever other word you want to use for the player to open his eyes.

The player opens his eyes, quickly locates the ball and swings at it. The first few times will probably be quite comical as the hitter will miss miserably, but as he becomes more focused, the eyes will locate the ball quicker and the coordination required to hit the ball will also increase dramatically.

Be careful Not to delay too long between tosses, as the hitter will become dizzy and disoriented if he stands there too long with his eyes closed. 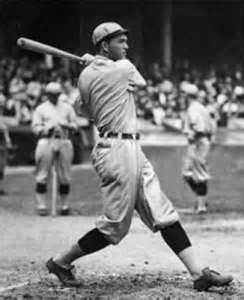 Roger Hornsby, perhaps the most prolific hitter of all time, was so convinced about the importance of his eyes and hitting, he refused to read a newspaper because of the strain of reading the small print. I’m not going that far, but it’ll give you an idea of the importance of Trained Vision was for a Hall of Fame Hitter.

One of the hardest things to teach a hitter, is how to keep their weight and hands back when hitting an off speed pitch. This drill will help teach the player to remain balanced at the plate until swinging.

Requirements: Tennis or rubber balls, a fungo, cork ball or broom handle to use as a bat are required for this drill.

The pitcher positions himself to throw from @ 30 - 45 feet in front of the batter, and is responsible to single bounce, at a slow rate of speed, the ball to the batter, crossing the plate as a strike. 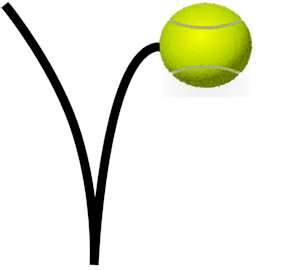 The hitter is to pick the ball up as soon as possible from the pitcher’s hand, watch the bounce of the ball, resist the urge to shift their weight forward in anticipation of hitting the slower pitch, attempt to hit the ball after the bounce.

This drill is especially good at teaching patience and avoiding putting too much weight to their lead foot, too soon. Have your fielders shag the balls the batter hits, which hopefully will be screamers, which will improve hand to eye coordination of the fielder.