We, as coaches, begin teaching baseball fundamentals at a slow methodical pace, paying attention to every detail, but after a year or two the pace of teaching quickens as the level of competition increases and we never look back.

This can be a huge mistake on the part of any coach, who understandably can become so engrossed in the Large Picture they fail to pay adequate attention to little skills, which are a very important part in the finished overall product of a skillful ball player.

I’m going to teach you some fundamentals which will stay with you a lifetime and improve your game, no matter the level of competition.

We talked in great length about proper foot and leg motions, in their proper order, while discussing stealing bases, running the bases, getting a good jump on a fly ball hit to the outfield, and even how to run through first base, but we never have discussed the start of everything …getting out of the batter’s box quickly.

If anything in baseball demonstrates, on an everyday occurrence, that baseball is a game of inches, it’s the bam - bam play at first base, between the runner’s foot hitting first vs. the ball hitting the fielder’s glove. This blink of an eye type of play, puts into perspective the importance of getting out of the batter’s box quickly. 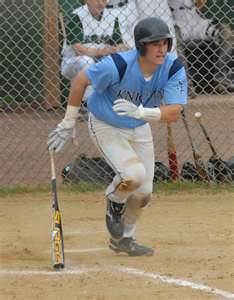 Every physical technique, pivots, leg drive and etc, designed for “Quick Acceleration” is adapted to the individual case, but every technique is based on the same principle, the key to success is being able to achieve traveling the maximum distance possible with the very First step.

Although quite elementary in nature, as I said, each situation can range from a bit different to drastically different, therefore this skill must be practiced until it’s performed correctly every time, for every situation, without thought.

Getting Out of the Box:

For a Right Handed Batter, upon bat contact with the ball, he should immediately drop the bat, this sounds simple but not so at first, as some players will sling the bat 10’ down the line or towards the on deck hitter, or gently lay the bat down as if not wanting to hurt it, before beginning to run.

Simply drop the bat, you’re in the follow through portion of the swing, your bat is behind you, just release it from your hands and drop it.

Once you drop the bat your First Step will be with your right or back leg. You’ll see players pivot on their right (rear) foot, pushing off it and leading, taking their first step, with their left (front) foot. 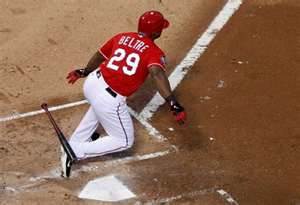 I can understand why someone would think this would be a good method, because Sprinters begin by pushing out of starting blocks, and they’re the premier short distance runners. However, if you closely exam their take off, their first step is taken with the leg against the back starting block.

It’s important to know whether right or left handed, leading with your rear leg and staying low for the first few steps before rising erect, will significantly decrease the time it takes you to reach first base. Your quickness down the first base line places extreme pressure on the infielders to cleanly and quickly field and throw the ball, which can lead to errors, and in any event will add some percentage points to your batting average, beating out some of those close throws. 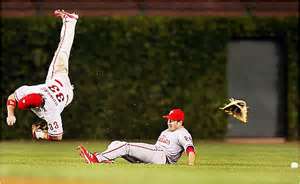 We’ve discussed the importance of communication between outfielders, but sometimes the smallest pre-play communication can make a huge difference on whether the play for an out is made or not.

One such incident is the case of a known power hitter with a reputation of hitting the ball deep and/or into the outfield gaps, coming to the plate. Normally the center fielder, because he’s the outfield general, will call the play, but that’s nothing written in stone. If the right fielder happens to know the particular hitter tends to hit to right center field, he should call the play. 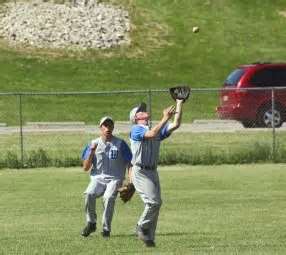 What this pre-determination accomplishes is;

1. No hesitation on the part of either outfielder;

2. A good angle of approach by the outfielder;

It’s simple baseball fundamentals similar to this that can ultimately have a huge impact on the outcome of the game. You won’t see this in the box scores or hear the announcers talk about it, but it’s another key part of communication which separates good teams from great teams.