Baseball Drills and Spring Training are synonymous no matter what age or skill level.

I remember when my players became older and more experienced they would whine or begin griping “We’ve already learned this.” I also remember my answer “So have every Major League Player currently in Spring Training and who are doing this exact drill.”

An unnamed MLB player said “Spring Training is like the movie Ground Hog Day …You keep doing it until you get it right. Then you do it again.” What a great description and how very accurate.

So when your players go to whining, remind them players earning 10 million dollars a year are performing the same drills they are. It’s not about knowing the drill or exercise or whatever …it’s about perfecting it. Big difference.

Pulled Muscles Can End A Season Before It Begins

Baseball Drills: -  Now everybody’s situation is unique. Some Coach’s have an excellent pitching staff, others a great defense, while others have a tremendous offensive attack.

Baseball Drills: -  In an effort to not bore anyone or not address at least one or two issues everyone usually shares, the drills will be offered in a Shotgun approach, which means we’ll offer fielding, pitching, catching, running and etc. drills in each series. Hopefully that approach will benefit the greatest number of coach’s needs.

*** In case any new coach is looking out at snow and a 20 degree day and wondering how in the world they’re suppose to practice, welcome to the world of North of the Mason Dixon line. Check out the availability of school, church and fraternities organizations who have gyms or large recreation rooms. There are also hundreds of batting and fielding cage facilities opening up in the country, check to see if one is near you.*** 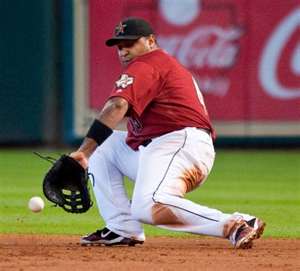 Back Hand Infield Drill: This drill is designed for all of your infielders, but especially the third baseman and shortstop. You can perform this drill one on one, or one side of the infield then the other.

As the intent is to field as many balls back handed as possible and quickly as possible, to have too many participants defeats the purpose. I suggest one on one, two on one limit.

The player is stationed at his position and goes into his natural fielding position. The coach stands @ 20’ away and throws ground and hopping balls to the player’s back hand side. ( You can use a bat to hit the balls if you have enough bat control to hit the grounders consistently to their backhand.)
I found throwing the balls more accurate and you can control the velocity the ball is traveling.

Have the fielder catch the ball, set and throw to first base. If the actual act of throwing the ball is restricted by size of gym or whatever, have the player simulate the throw.

Baseball Drills: - When performing this drill with the first baseman, concentrate on him feeding the ball to the pitcher who is covering the base. You can practice two skills with two separate players at the same time. The fielder catching back handed hits, throwing to first and the pitcher developing his skill and timing covering the base. 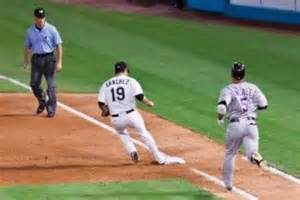 The Cone Drill: This drill is designed to teach the infielders to take a straight throwing line to the target by squaring up their body and shoulders and applies to the third base, shortstop and second base positions.

Taking each position individually, set two to three orange cones in a straight throwing line from the player’s fielding position and first base. Throwing or hitting the ball slightly to the player’s right side or right at him, have them field the ball, set, crow hop moving forward to first base, making sure they are in direct line with the orange cones. 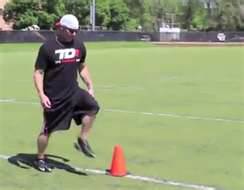 Cones Can Be Used For All Types Of Drills

This drill will teach them to be moving directly towards their target with their shoulders in throwing line. A lot of players will field a ground ball, but have no real indicator as to where they are in alignment to their target, in this case first base.