The number of Baseball Catching Drills far exceed the normal fielding position and since the catcher must be the smartest player on the field, that only makes sense.

Let’s continue your education of becoming an all-star catcher with the following drills.

Hypothetically, a fleet footed left handed hitter who has just laid down a perfect bunt which is hugging the third base foul line 25 feet from home plate, would be considered a perfect bunt, and the catcher would have nothing to do in this play.

In fact he has already anticipated this possible situation and has made mental plans of how he was going to react to prevent the base hit.

Not unlike the fabled sleuth Sherlock Holmes, a thinking back stop will never cease to amaze some people with their quick and accurate analysis of a situation. However, this seemingly, magical knowledge is a product of hard work, intelligence and anticipation.

Before every game my catchers had the assignment to roll 4 or 5 baseballs down the 3rd base and 1st base foul line. He would watch to determine if the field had a significant crown that would make the slow roller stay fair or go foul, which affords him the advanced decision making tools to make a quick call on our hypothetical situation.

A catcher should perform this ritual prior to every game, on every field, even if we had played on it twenty times before, because at this level field groomers are neither professional or the same one every time. Crowns may vary on a daily basis, during tournament play, perhaps several times a day.

Armed with this information, if the hitter lays a good bunt down either foul line, and the catcher determines our defender will not be able to make the play, he will immediately yell instructions to the infielder to let the ball roll if it appears to be in an area which leans towards foul territory.

By doing his preparations properly instead of the infielder picking the ball up and conceding the base hit, they allow it to roll and the instant it goes foul the fielder picks it up to keep it from rolling back fair again. A foul ball strike instead of a base hit.

A little tip here: Don’t allow everyone to become so engrossed in watching the baseball that they forget the runner. While one fielder watches the ball the other player, normally the catcher because he’ll be facing second base, watches the runner.

The T, similar to the Pitcher’s T, is an integral aid in developing and verifying the utilization of the proper footwork required for an accurate throw to second base, and as a catcher if you can master the throw to second, throwing to third or behind the runner at first, is a piece of cake.

(1.) Beginning at the point of home plate, draw a line straight back a little past the catcher’s normal position in the box, then draw another line which crosses it, forming a T in the dirt.

I prefer the T method as it offers greater flexibility.

Nothing is more important than time, or lack of it, when attempting to throw a runner out at second base, therefore, a catcher must make quick, short steps when getting into position to throw to second base, but proper form for a strong accurate throw must accompany the quickness as a quick wild throw helps no one but the opponent.

Step 1: As you begin to receive the pitch, be in your ready stance, or throwing stance, legs forming a right angle, thighs level with the hips.

Step 2: Catching the ball, you quickly pop up stepping backwards with your right foot.

Step 3: Stop at this point and look at your back foot. It should be on the line, if not, you’re not in the proper position, and just as a pitcher, if your footwork is wrong it’ll force you to throw across your body which will have a negative impact on velocity and accuracy.

It doesn’t matter where the pitch is located, inside or outside, you will shift your body left or right as needed, but the step backwards should always land on the back line, as this is your “pitching rubber” per se, where you push off from.

Remember to always have your head facing the base you’re throwing to, as this forces the shoulders to come square for a stronger throw, and your form should resemble that of a quarterback’s throwing motion, hand coming past your ear as you follow through.

Always try to grab the baseball in a 4 seam grip when transferring it from the mitt to the hand. It’s an excellent idea to practice feeling for the proper grip every time you play catch, whether with your mitt or a glove. 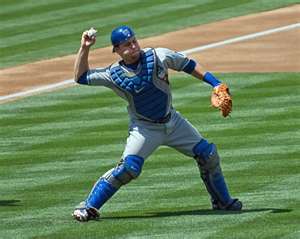 A little tip for Coaches of younger players age 11 and down. These players have not developed the arm strength to throw to second base from a set position. You can still use the T drill, but have your catcher take a crow hop or step from the T line, this gives him forward momentum which will help him make the long throw.

This drill is designed to increase a catcher’s hand speed by requiring him to quickly react to several throws in rapid succession.

The Catcher, in full equipment, assumes his normal catching position behind the plate.

Have a player or coach position himself half way between home plate and the pitching mound with a bucket of baseballs. The player should wear a glove in order to be able to carry two or more balls without having to stop and pick a ball up from the ground or bucket.

The Coach throws as many baseballs in rapid succession as possible and as fast as possible. The catcher is to catch them, then discard them at his feet and prepare for the next throw.
In advanced training a thrower is stationed on each side of the pitching mound and halfway to the plate. One thrower throws until out of balls, then the other thrower immediately begins throwing while the first reloads with baseballs.

As a Catcher your strategy in calling a game is to allow your pitcher to throw whatever type of pitch and location which will induce the hitter to make an out, and at times, this will include a breaking ball in the dirt.

Your job will be to use your body and mitt to perform a controlled block of the ball, sure handed retrieval and accurately throwing the runner out at first base.

Baseball Catching Drills to How to Play Baseball