Both stadiums are located in The Bronx in New York City, the first stadium built in 1923 sets across the street from the brand new Ball Park, opened on April 3rd, 2009. 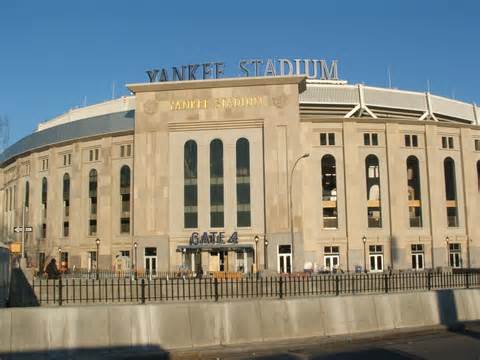 Controversy followed the new stadium project from start to finish and continues today, long after completion. Yankee fans were not excited about losing the House Ruth built, so in order to placate them, the new stadium incorporates much of the same visual look.

The stadium was constructed on 24 acres of public land and promises made by the builder, such as replacing public ball parks lost due the elimination of the 24 acres, has not been completed.

Last but not least, was the cost of construction, which was $1.5 Billion dollars, which makes it the 3rd or 4th most expensive sports facility in the entire world. 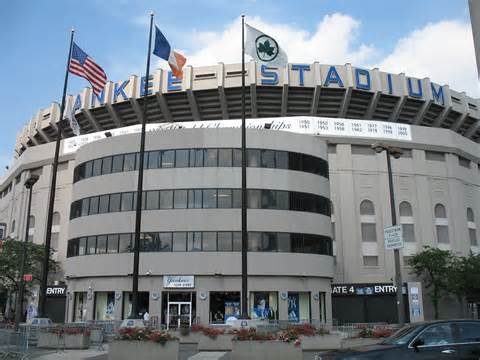 The new stadium was designed for the exterior, constructed out of 11,000 pieces of Indiana limestone and concrete, to be nearly identical to the old stadium. The interior of the ball park is adorned with over 2,000 photos which capture the history of the Yankee franchise.

The posted signage of field dimensions are identical to the old Yankee stadium, yet the true distances are different, because of the installation of an embedded manual scoreboard in right field, the wall is actually 5’ closer to home plate.

Additionally, the old Yankee stadium’s right field wall curved from the right field corner to straightaway center field, but the wall in the new stadium assumes a sharp, almost right angle direction to straight away center field. Due to this difference in construction, some points of the wall are actually 9’ closer to home plate than the old park. 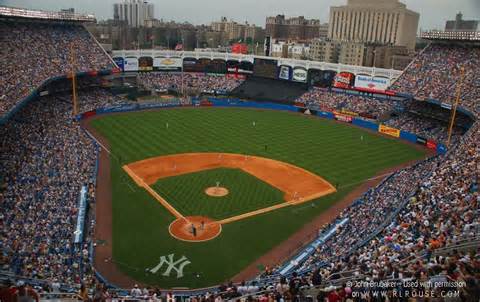 Amenities and Facilities of The Ball Park

The new stadium contains 63% more space, 500,000 square feet more in total, than the old stadium, with wider concourses which are open sight lines to the field.

The centerfield scoreboard measures 59 x 101 feet and offers 5,925 square feet of viewing area. When new the scoreboard was the 3rd largest in the world behind Kauffman stadium and Tokyo Racecourse, but the new Cowboys stadium scoreboard, which is the world’s largest, has pushed it down to 4th place.

The Yankee clubhouse features over 30,000 square feet of space. It contains a weight room, training room, video room and a lounge area where players rest waiting their turn in the indoor batting cages. It also includes a hydrotherapy pool with an underwater tread mill.

The players dressing area has 3344 square feet of space and each player’s locker comes equipped with a safe deposit box and a touch-screen computer. The Yankees Museum is located on the lower level of the complex at Gate 6 and displays a large and wide range of Yankees’ memorabilia. There is a “Ball Wall” which displays hundreds of baseballs autographed by past and present Yankee players.

Possibly the center piece of the museum is a tribute to Don Larsen’s perfect game in the 1956 World Series. There is a commemorative home plate embedded in the floor and statues of Larsen pitching to Yogi Berra.

On a somber note, there is a exhibit of a facsimile of the current Yankee locker room where the late Thurman Munson’s locker sits empty in honor of Munson.
Eateries

There is no shortage of available places to eat and drink in the new Stadium. There are 25 stationary concession stands along with 112 movable ones. There is a Hard Rock Café, opened year around, a steakhouse called NYY Steak and the Mohegan Sun sports bar. 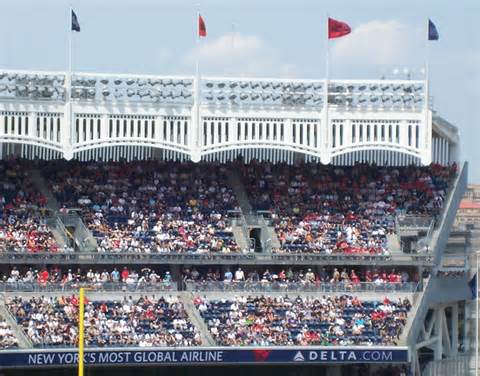