Wrigley Field, the current home of the Chicago Cubs baseball team, was originally constructed in 1914 for $250,000 in an astonishing 6 weeks.

Designed by Zachary Taylor Davis, who designed Comisky Park four years earlier for the Chicago White Sox, the stadium seated between 14 and 20,000 and was originally named Weeghman Park for the Whales baseball team, of the Federal League, which was the first tenant.

In 1915 the Federal League folded and the Chicago Cubs moved from their dilapidated field at West Side Grounds to the newly constructed stadium and when Wrigley, who had been a partner in the club, gained control of the Cubs in 1918, he renamed the stadium to Wrigley Field in 1926. 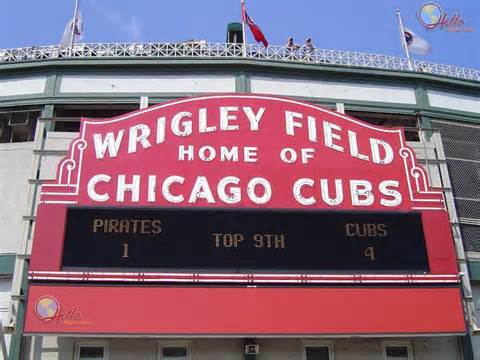 Recessed Walls, or wells as they are known, are located in left and right field and when the famous Cross Winds of Chicago, which blow off Lake Michigan, increases in intensity, these wells can create unusual and unpredictable wind currents which cause the ball to react in crazy manners.

The Basket which is unique to Chicago, is a net running the entire length of the outfield and was designed to prevent fans from falling onto the field from the bleachers. Because the netting runs 2 foot above the wall and is anchored 7 to 10 feet below the top, creating a basket, the actual dimensions listed on the walls, as far as hitting a home run, is not accurate, its actually less distance from home plate as a ball landing in the net is considered a Home Run. 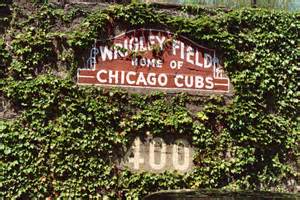 Wrigley Field Ivy - Covered Walls, which at the time the ivy was installed was not unique, now is famous and adds to the historic glamour of the ball park.

The Ivy was installed in 1937 as part of a beautification plan for the bleachers, which were installed the same year, and it’s rumored General Manager Bill Veeck got the idea of the ivy from the Donnie Busch Stadium in Indianapolis.

The Ivy, which is a combination of Boston Ivy & Japanese Bittersweet, can endure the harsh Chicago winters, which many other ivy species could not. However, the ivy is Not leafed out at the time the baseball season begins and the brick wall is distinguishable through the ivy vines, but as the season proceeds the ivy flowers into its distinctive green and totally hides the brick wall.

Special ground rules are implemented due to the ivy. Should a baseball hit the wall and become lodged in the ivy, and if the outfielder cannot locate it because it’s hidden in the ivy, the fielder will raise both hands over his head and an umpire will go out to see if in fact the ball is lost in the ivy. It is then ruled a Ground Rule Double.

One misnomer of the Ivy is that it cushions a player’s impact against the brick wall if he runs into it … it does not.

Wrigley Field in the 40's

Many old baseball parks were built in the middle of residential areas, which were multi storied tenant houses or apartments. The roof tops of these adjacent buildings offered an excellent view of the baseball game from which the game could be viewed for Free.

Similar situations existed in other cities, such as Philadelphia, which created rifts between the residences and the ball club. The Phillies constructed a Spite fence between the stadium and the residences of Shibe Park, which ended in a bitter dispute.

The Cubs however, took a different approach to the roof top viewers, across Waveland and Sheffield, who held cook outs and were populated with a reasonable amount of fans. They quietly ignored them. However, in the 1990s owners of the apartment buildings began constructing bleachers and charging people to view the game. This is when the Cubs began to protest and as the number of bleachers increased, the more vocal the Cubs became.

In 2003, with the threats of legal action, the Cubs, apartment owners and the city reached a peaceful solution which was amicable to all parties. The building owners agreed to share some of the revenue derived from their bleachers and the city allowed the Cubs to build additional bleachers over the sidewalks of property located along Clark & Wave and Seminary Avenue. 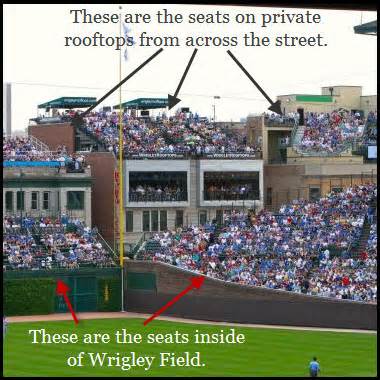 Some of the Roof Top Bleachers have become famous in their own right. The Lakeview Baseball Club, which sits across Sheffield Avenue, displays a large sign which reads “Eamus Catuli !”  which is Latin for“Let’s Go Cubs!”

The Infamous Wind, of Wrigley which blows off Lake Michigan ( located less than a mile to the East ) changes as the season proceeds playing a major role in the games.

In April and May, the winds blow in from the North East which prevents balls hit hard enough to be home runs, from leaving the park and result in outs.

In the Summer Months the wind on a sunny breezy day, will come out of the South or Southwest, which creates a Blowing Out wind which turns normal fly ball outs to become Home Runs.

There is an additional Wind variety known as a Cross Wind, which normally blows from the Left field corner to the Right field corner and can create chaos on high hit fly balls.

Depending on the direction and strength of the prevailing wind, Wrigley Field can become a hitter’s park, known as the “friendly confines of Wrigley,” or a pitcher’s friend by keeping balls in the park or an outfielder’s worst nightmare because of the swirling upper winds creating havoc on fly balls. 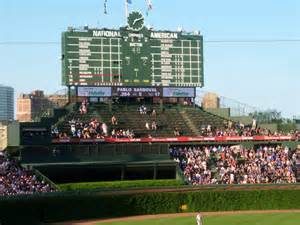 The hand turned score board was installed in 1937 when additional bleachers were installed and with the exceptions of a few minor updates, remains the same as the original. Since it was constructed above the bleachers and not at ground level like similar scoreboards, it has Never been hit by a baseball.

The replacement of a ticker tape machine, which the scoreboard operator used to update scores around the league, with a computer, more or less completes any modifications of the original scoreboard.

The Main Entry Marquee is located directly over the Main Entrance of the stadium and is probably the most familiar icon of the exterior.

The marquee was installed in 1934 and was painted Blue and used changeable letters, similar to those used on the scoreboard, to announce upcoming games and opponents. The sign read “Home Of The Cubs” until 1939 when it was changed to “Home Of Chicago Cubs”.
In the 1960s the color of the marquee was changed to Red and in 1982 an electronic message board was installed replacing the hand turned letters.

Lights and Wrigley Field were not always spoken in the same sentence, not that lights were not considered. In 1942 Wrigley had planned to install lights, but World War II began and the project was scrapped.

The tradition of playing only day games at Wrigley became deep rooted and it wasn’t until 1988 the team succumbed to pressure from the MLB and installed the lights. Although MLB forced the Cubs to install lights, or else never be able to host post-season games, the number of games are still restricted by the city council.

August 8th was the first attempt to play a night game between the Cubs and the Phillies, but it was rained out in the 3rd inning, resulting in the 1st night game being played on August 9th, 1988.

Check Out The Cubs & Wrigley