When it comes to Tropicana Field, the saying “Build It and They Will Come,” must have been the motto of Tampa Bay citizens, as they built a Baseball stadium, without a baseball team.

After the Tampa Bay area was awarded the Tampa Bay Buccaneers, of the NFL, and the Tampa Bay Rowdies, the city decided to go after acquiring a major league baseball team, and to do that, they had to build a stadium in which to lure a team to relocate.

In 1983 the city began debating on style and architecture of a stadium, which an open - air stadium was the favorite design, however with Tampa’s humid summers and frequent thunder storms, it was decided to build a domed ball park and name it Florida Sun Coast Dome. 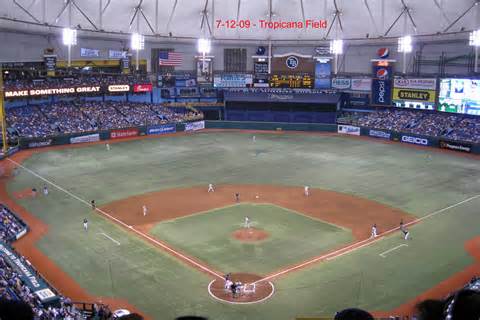 Construction began in 1986 with the intention of luring the Chicago White Sox away from Chicago if a new stadium to replace the ancient Comisky Park was not built, however Illinois agreed to build a new ball park for the White Sox.

The stadium was completed in 1990 without a tenant, but the stadium put Tampa Bay in the running for one of two MLB expansion teams in 1993, but they lost out to Miami and Denver. The city then tried to lure the Seattle Mariners and/or the San Francisco Giants to the area.

The Giants agreed, in principal, to relocate to Tampa, but the move was blocked by the MLB owners, one of which was Wayne Huizenga, owner of Block Buster Video, which lead to a Tampa Bay city wide boycott of the movie rental locations in the Bay area.

In 1995 Tampa was awarded a franchise team by the MLB. Upgrades and renovations were made in order to maintain a MLB team and its name was changed from "Florida Sun Coast Dome to Tropicana Field." 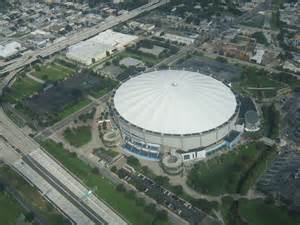 Being a domed stadium, the an Astro Turf field was initially installed, but in 2000, it was replaced by a new and softer version of FieldTurf , becoming the first major sporting facility to use the new product.

Because the Ball Park is solely used for baseball and not as a baseball/football complex, unlike other domed stadiums, the facility has Full Dirt Infield Base Paths & Pitching Mound in opposed to only a dirt sliding pit around the bases, because there’s no need to convert to football.

The most distinguishable exterior feature of the stadium is its slanted roof, which was designed to reduce interior air volume, which lessened cooling costs, and to help withstand the adverse effects of a hurricane. The dome is supported by a Temerity structure which, after a Rays home game victory, is lit up with orange lights.

The main rotunda, on the East end of the stadium, resembles the interior rotunda look of Ebbets Field. The main entrance walkway, which is 900’, is made of 1,849,091 one inch square mosaic tiles, making it the largest outdoor tile mosaic in Florida and the fifth largest in the United States. 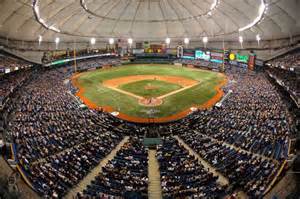 Rays The Torch Tank is located just over the right-center field fence, this 35 foot, 10,000 gallon tank is filled with Cow Nose Rays, which inhabit the waters of Tampa.

The exhibit is free to all fans, although limited to 50 at any one time, and not only serves as an educational tool, unmatched at any other stadium, but also promotes awareness of the Florida Aquarium. All proceeds from the sale of Ray food is donated to the aquarium.

In addition to the food sale proceeds, The Rays baseball team has pledge $5,000 for every ball hit into the aquarium, half to the Florida Aquarium and half to the hitter’s favorite charity.

To date, only 1 ball, hit by Luis Gonzalez, a Dodger player, has hit a ball into the aquarium. 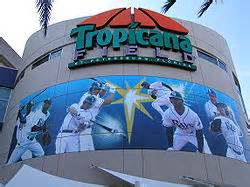 In 2006 the Ted Williams Museum / Hitters Hall Of Fame was moved from Hernando, Florida to an upstairs wing of the stadium. In addition to various signed memorabilia from many former baseball players, the museum houses exhibits on Ted William’s career(s) both as a baseball player and as an US Marine during WW II and the Korean war.