What’s the difference between a Throwing a Cutter and a Slider? Depends on who you ask. Some will say nothing, while others will argue otherwise. Pitches seem to go through a fashion stage from time to time in order to impress the new generation.

For instance, the fork ball has the exact same movement as a split finger fastball, in reality they are the same pitch, but when a modern day player, Bruce Sutter comes to mind, suddenly enjoys huge success with this type of pitch … well, it just has to be a new type of pitch. Again, it doesn’t matter if you classify the cutter as a fastball or a slider, it’s how you throw it and the results you get that makes the difference. 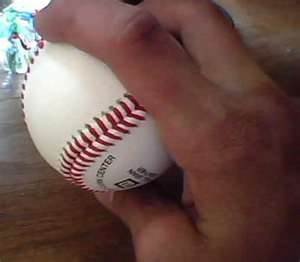 When learning sharp breaking pitches you’ll immediately recognize the Pitching Grip is not the only thing that dictates the way a baseball reacts when thrown, but Pressure and Wrist angle also directly affect the ball’s movements.

What makes the cutter so effective is its late break, which should occur after the batter has begun his swing and can not stop or alter it. The Cutter reacts with a quick movement, cutting sharply away and down as it approaches the plate, thus the name.

Although the Cutter grip is essential the same as a four seam fastball, the finger pressure or wrist angle is different, making it a much harder pitch to master control of. 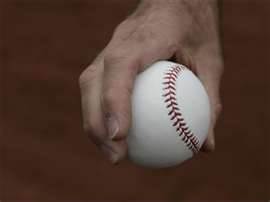 How to Throw a Cutter:

There are essentially 2 different methods of throwing a cutter.

The first method to throw a cutter is what they call Pre-Setting the wrist. What that means is you will grip the baseball the same way you would a four seam fastball, but as you deliver, your wrist is cocked at an inward angle towards your body, similar to hand placement when throwing a curve ball.

As you follow through due to the angled wrist, the hand releases the baseball in such a manner as to create a tight spin, this spin is what gives the Cutter it’s “cutting movement.”

In order to be consistent, certain elements must be performed the identical same way every time the pitch is thrown, and wrist angle is extremely difficult to replicate each time you throw a particular pitch. That’s why Major League pitchers will take months to attempt to learn a new pitch and may end up abandoning it because it’s just too difficult to control with the pin point accuracy required at that level of play. 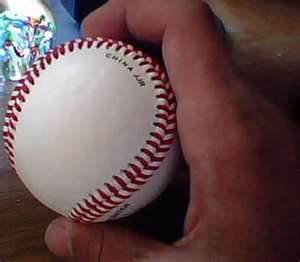 Therefore, I personally could never expect a 15 year old to learn such a precise body movement on a repetitive basis, when a professional athlete may not have that ability.

However, finger pressure is another totally different physical task to simulate, and can be repeated, or very closely repeated, time after time.

You utilize essentially the same Pitching Grip you used to throw a four seam fastball, which is an easy and familiar grip, except …the middle finger applies pressure to the ball.

After attaining your grip on the ball, you will squeeze the baseball with your middle finger only, applying a desired amount of pressure on the ball. Your pointer finger applies no pressure and is there solely to keep the ball from falling out of your hand. It does nothing else.

As you follow through with your delivery, and it is very important to follow completely through, the baseball leaves the hand with a tight spin, due to the finger pressure you have applied, which creates the spin which enables the ball to cut sideways as it approaches the plate.

Throwing a Cutter to Baseball Pitchers