The Double Play - Second Base Execution:

They say turning the double play is a pitcher’s best friend, and considering it’s like a “buy 1 get the 2nd one free,” I’d have to agree, because we all like deals.

However, turning the double play requires several skills, footwork, handwork and timing, between not only 1 player, but 2 or more. We’ll begin with learning the responsibilities and skill sets required of the second baseman and proceed from there.
You may tire of me repeating myself on this issue, but I can’t stress it enough. Baseball is a thinking man’s sport. The mind is similar to a miniature computer and if you pre-program what you’re going to do in a given situation, you’ll respond instantly, shaving that 100’s of a second off the time which determines getting the out call instead of safe. 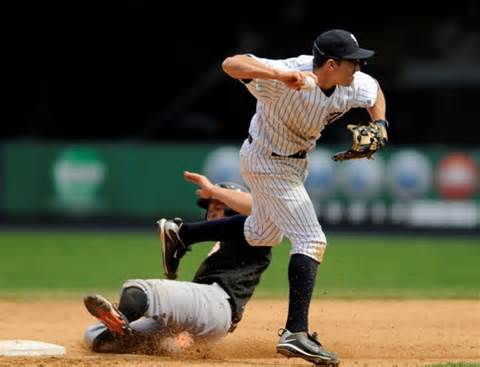 As the second baseman approaches second base to receive the throw, from either the shortstop or the third baseman, he must decide what footwork he’ll employ to make his pivot and throw and that depends on timing, where he is in relation to the base when he catches the ball.

In this example he will employ a step pass or step over method, which is usually used when he reaches second base slightly ahead of the ball.

(1.)  All in what will appear to be one motion … as he catches the ball his left foot will step slightly pass the inside portion of the base;

(2.) Simultaneously, he will dragging his right foot across the base;

(3.) As he steps passed the base, he will turn his left shoulder and hips to be facing first base, which will turn his entire body, while at the same time be reaching in and grabbing the ball from his glove;

(4.) As his right foot hits the ground, he will plant, then push off and throw to first.

It’s important the foot work be performed correctly in order to be able to plant the right foot and push off making the throw as strong as possible. Again … Step past with left foot, drag right foot across, plant and throw. There won’t be time for a crow hop, the throw must be made more with arm strength.

I was practicing this drill one day under the watchful eye of my minor league coach when he stopped me and asked what I thought I was doing. Rather puzzled I began explaining when he abruptly stopped me.

“You touching the base with your right foot?” he asked.

“Of course,” I proudly replied.

“That ever cause you any problem,” he asked “like slowing you down or making your footwork awkward?”

He then walked over to second base and with an exaggerated bent over posture he looked across the base, then stood up.

“Think the umpire is going to do that to make sure you physically touch that base?”

From that moment on, unless it just happened, I never worried about physically touching the base again. I merely moved my foot across it.

For anyone scratching their head right now … this is the hardest footwork method of making the double play for the second baseman.

The second baseman quickly runs to the base to receive the throw from the third baseman, but due to the extra long throw, he’s there before the ball. If he tries to slow down in order to time the arrival of the ball, then cross and drag, the timing and flow of the play will be destroyed and so will any chances of completing the play.

(1.)  Therefore, he positions himself to the Right field side of the base, braces his left foot against the base;

(2.) After catching the ball, he pushes off the base with his left foot or simply steps backwards onto his right foot, firmly planting it, and makes the throw to first base; 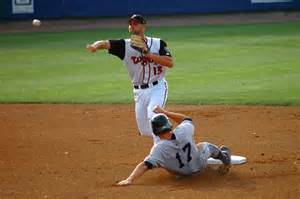 (3.) Because he had time to pre-set his foot and body position, which was angled towards first base, he can quickly get off a strong throw.

Method 3 is similar to method 2 as far as the second baseman arriving before the ball, but because of starting positioning or the infielder’s preference, the second baseman is standing to the Left Center Field side of the base when he catches the ball;

(1.) Because he has positioned himself in a straight line to first base, he has the option of bracing his left foot against the base and stepping backwards, planting his right foot and throwing …….. OR

(2.) receiving the ball and Stepping forward, over the base moving towards first base, making the throw.

Regardless of the type of footwork used for the play there’s 1 common threat you must be aware of, and that’s the oncoming base runner, who has the job of breaking up the double play by disrupting your ability to throw to first.

It is perfectly legal for a base runner to disrupt a fielder from completing his play, and is normally accomplished by forcing the fielder to abort or drastically alter his movements.

In other words, taking you out of the play. He’ll try to accomplish this by:

(a.) trying to take your feet out from under you before you can throw the ball;

(b.) Sliding hard, but late, making completing your throw while avoiding a body slam, difficult;

(c.) Not sliding at all, but rather approach second base standing up forcing you to alter your body position and throw.

The simplified rules of the game says the runner is perfectly legal performing any of these acts, and more, as long as he can make bodily contact with the base. 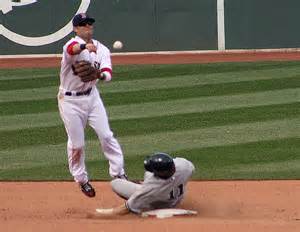 You’re counter measures to these moves are rather simple. Get out of the way, but ….

(1.) Step out of the way after completing the throw;

(2.) Leap into the air to avoid a collision, which instead has you possibly falling onto the runner instead;

(3.) As you are legally entitled to a direct path in which to throw to first base, zip the ball to first, shoulder or slightly higher.

a. The runner will avoid the ball, by natural instinct, and will probably not ever come in high again.
b. Other players will take note and scratch the coming in high as an option.

Just for the record, I’m Not advocating hitting anyone, but similar to the pitcher pitching inside, you must protect your rights or they’ll take them away from you.


The Double Play Back to How to Play Infield