Target Field, home to the Minnesota Twins MLB team, since 2010 was built specifically for the Twins after playing in the Hubert H. Humphrey MetroDome for 28 years. It is the first facility built solely for baseball as the Metrodome was built as a multi-purpose stadium, shared with the Minnesota Vikings NFL team and the Minnesota Golden Gophers college football team.

The 39,504 seat stadium is located in the Warehouse District West of downtown Minneapolis. The Twins specifically attempted to build a ball park which neither favored pitchers or hitters, but being an open air stadium, there was only so much they could do and records indicate the stadium definitely favors Pitchers. 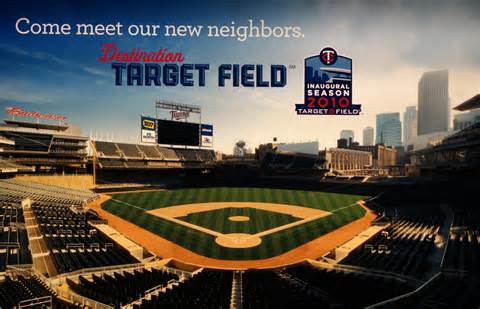 The Twins did not want to build a replica of Camden Yards, so in order to prevent this they Local Limestone in the construction, Heated Seating Areas and a Heated Field.

The idea of building a retractable roof was included in the original plans for consideration, as the Metrodome was enclosed and had protected the baseball schedule from the weather hazards, early and late in the season. However, the inclusion of a retractable roof added $100 million to the total budget and all parties concerned agreed it was too costly.

Because it was new construction many questioned the size of the stadium, @ 1 million square feet, and criticized it as too small, although the stadium is essentially the same size as Fenway Park, and holds a similar number of seats. 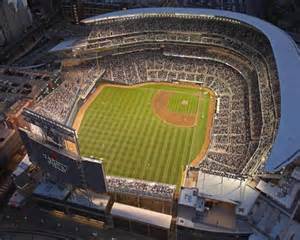 Target Field is continually being upgraded and remodeled with the Fans comfort and enjoyment being the driving goal. For instance, the upper roof was fitted with an enlarged canopy which helps protect more fans from weather elements.

The scoreboard was upgraded to High Definition, measuring 101 feet long and  57 feet high, making it the 4th largest in baseball.

100,000 square feet of the exterior was covered with Mankato Limestone, heating areas were built and the number of restrooms and concession stands were substantially increased.

The original Metropolitan Stadium flagpole, which had been given to the American Legion Post in Richfield, was completely restored and donated back to the Twins, where it stands in the Right Field Plaza. The Right Field area also includes a New scoreboard and in Right-Center Field, adjacent to the scoreboard stands the Twin Towers, a 100 foot illuminated tower. 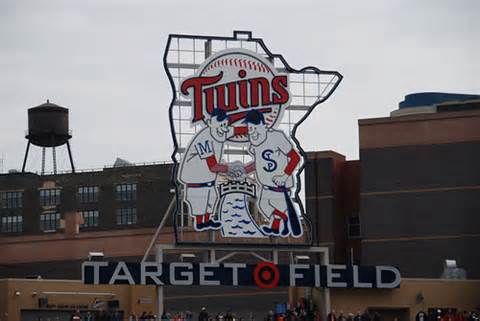 A large version of the Twins original “Minnie & Paul” logo stands in center field. The logo displays Two Players, dressed in their uniforms of the two minor league teams which played in Minnesota prior to the Twins, shaking hands across the Mississippi river.

Strobe lights on the logo flash in different sequences to indicated different actions on the field. For instance:

1. The strobe lights trace the border, beginning at the bottom left corner, across home plate when the Twins score a run, other than by a home run.

2. The corners flash when a strike out is recorded.

4. The T and S flash when the Twins win. 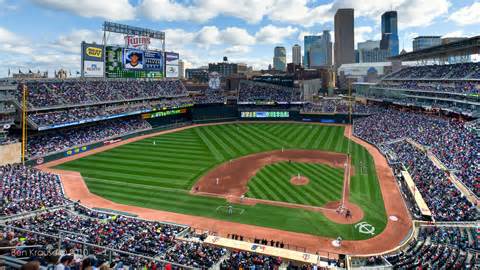