Player Injury --- Explaining the events or mechanisms which lead to elbow injuries in baseball players is quite complicated, but it’s important we have a general idea of what causes the injury, in order to avoid developing it or creating it in our players. Let’s see if we can break it down into smaller understandable chunks of information.

The elbow is basically a power hinge mobilized by the biceps and triceps muscles. The elbow’s natural hinged motion, the forearm coming forward from the elbow, is what allows female softball players, in spite of throwing hard and breaking pitches, to pitch inning after inning on consecutive days. The elbow is not experiencing undue stress or strain because the pitching motion utilizes natural body motions.

However, when we begin throwing the baseball overhand, things change drastically and immediately. Pitchers create energy and power from their legs and buttocks which creates the rotation of the body trunk as he goes through his windup. 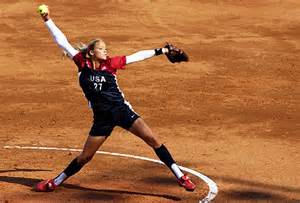 Player Injury --- As the shoulder rotates backwards, as we square our body, the shoulder and elbow act as links or connectors between our body and our hand as we extend the pitching arm backwards.

This rotating motion of the shoulders is what’s known as  External Rotation, when the body suddenly stops the backwards rotation and begins the forward rotation, the start of throwing, this is known as Internal Rotation.

The hand, which is behind the body and the sudden thrust forward, creates tremendous speed which then reacts like the tip of a whip. The tip of the whip moves much quicker than the handle of the whip. When the shoulder changes momentum by suddenly moving forward, throwing the pitch, this places tremendous stress on the elbow.

The reason it doesn’t tear is the adjacent muscles protect it from much of the destructive force. However, if a pitcher throws too hard, too often or has Bad Mechanics the stress can eventually become too great and the ligament will tear. 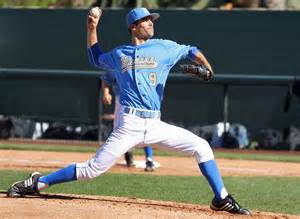 Most often when this ligament tears the pitcher will feel a pop on the inner side of his elbow, some report they actually heard the pop. The pitcher will feel immediate pain, and although he may try to throw a few more pitches hoping to “work it out” the pain will be too great to continue.

Shoulders of pitchers also endure a tremendous amount of strain when throwing, the most common injuries are to the capsule/ligaments, rotator cuff and the labrum.

Be aware that the age of the player can, at times, be the reason for pain developing. An 8 to 12 year old player experiencing moderate elbow pain, may not be injured at all, but rather experiencing difficulty handling a Growth Plate problem which is antagonizes by attempting to throw breaking balls or throwing too often. 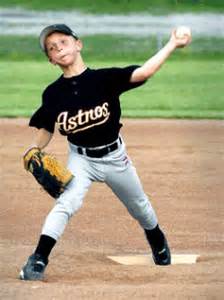 However, if a 16 year old pitcher is experiencing the discomfort, immediately stop having him pitch and advise medical evaluation by a competent sports doctor, as this could be an early warning signal of a more serious injury about to occur.

The strain or tearing of a flexor tendon in the hand is not a common injury, but can occur in pitchers who have smaller hands and fingers, which require extreme separation of the fingers, such as when throwing a split finger fastball also known as a forkball, small tears can occur in the Flexor tendon.

Rest will normally allow the tendon to heal, but surgery is, at times, required.

A coach can have a large impact on the health of his players, pitchers specifically. The most important matter to address is teaching Proper Pitching Mechanics,I can not stress this point enough. The coach must monitor the amount of innings or pitches a player throws in any one specific time span. Over throwing can result in severe injury, so it’s important for the coach to know if the player also pitches for another team.

Be very careful allowing young players to begin attempting to throw breaking balls too soon as it can ruin a young arm forever.