A pitching workout routine is extremely important for pitchers of all ages, but the older and more advanced pitchers, in order to be successful, must have a pre-game starting routine.

So what does a pitching workout routine involve and how do I develop one? Let’s look at a sample routine college, minor league and some pros use. This example is becoming more & more relative to younger aged pitchers as “Traveling Teams,” which are run like a college program, are becoming more popular. These programs have a standard starting rotation and it’s to these issues we’ll address our sample.

Working Up the Pitcher's Starting Routine

Keep in mind developing your routine will be a trial and error procedure, as nobody reacts the same to every situation. However, once the routine is developed it is best to strictly adhere to it with some flexibility built in to allow for weather conditions or taking longer to stretch out.

Having said that, there is a tried and true establish set of guidelines from which the routine should be developed without any drastic alterations. Remember, you are preparing mentally as well as physically, so sticking to an establish routine is imperative.

I’d venture to guess everyone has heard the phrase “You are what you eat.” Meals the day prior to a start should be heavy in proteins and carbs which the body can transform into energy.

Although pre-game jitters can create a restless night’s sleep, try to get enough sleep. Going to bed early will force you to rest even if you can’t sleep well.

If you are on the road all pitchers, not just the starter, should pack their field bag and have it setting by the door the night before. Include such items as undergarments, towels (2-3), uniform if not wearing it to the park, and some extra clothing and a light jacket.

If it is really hot that day pack an extra pair of socks and tee-shirts, you don’t want to pitch in heavy wet clothing.

You should be discussing the opposing team and possible strategy with your catcher. Most pitching anymore is called from the dugout so this is not extremely important at this level.

The pitcher should grab his gear, which could include jacket, spikes, a couple of extra baseballs, towel, water bottle and glove and head to the bullpen with the pitching coach and a bullpen catcher. The game day catcher will not be used to warm you up. 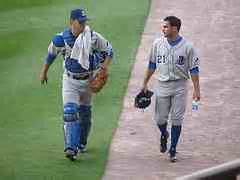 Why so early? Most people don’t like being rushed to do anything and that’s especially true for a starting pitcher. This extra time allows the pitcher to ease into the pace in case it’s very hot or very cold. It gives you some flexibility for unforeseen situations.

As a rule a pitching coach will not hover over the pitcher, but merely observe. It is his job to keep track of the time.

Begin your warm up routine. The pitcher should begin by jogging, but quickly begin running hard enough to work up a good sweat. This is when excess nervous energy is spent and/or sluggish feelings are discarded. This is when the athlete places his body on “Get Ready” mode. 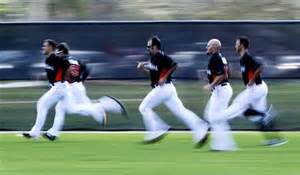 You should be totally warm by now. It is now time to do a full body stretch routine with a partner, usually the bullpen catcher, but it can be any player. Once the pitcher completes the stretch routine it’s time for him to perform some exercises, elastic-cord or band, which will specifically warm up the arm and shoulder muscles.

The pitcher should now begin the first stage of his throwing routine. Begin slowly, doesn’t matter if it is spring training or the Fall Classic, this is a routine to adhere to. 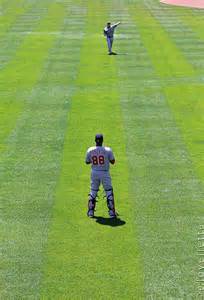 Throw wrist flicks, one knee, figure 8’s etc. then begin throwing to the bullpen catcher at @60’ and increase to @100’ apart. After he feels good extension and stretch on his front side, the catcher should begin shortening the throwing distance. As he reaches 60’ – 55’ begin trying to throw to a specific target, but not from a windup.

Pitching routine begins in earnest. Begin by stationing yourself behind the pitcher’s mound and throwing to the catcher, using about 3 to four steps and throws as you climb the back of the mound. This little trick forces the pitcher to get on top of the ball and follow through completely. 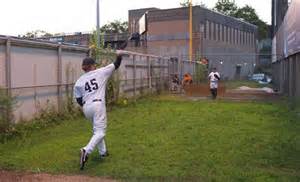 Reaching the rubber he begins throwing from both the stretch and the windup. Usually 3-4 pitches from each position, while throwing fastballs to the middle and each side of the plate.

After completing his fastballs, the pitcher repeats the same sequence while throwing his change-up and any other pitch he throws. This is when positive thinking (self-talking) and hitting spots low in the zone become crucial for getting to the right frame of mind.

The pitcher now begins warming up with the starting catcher. This is when the battery begins to become one unit. Don’t overdo. Preparing for the game is much more important than trying to conserve energy for a 9 inning outing, but 20 – 25 pitches from the mound should be enough. 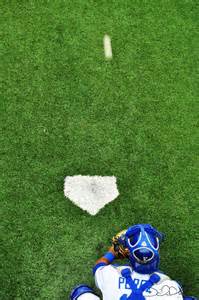 A good starting point would be throwing 8-10 throws of a mixture of all your pitches from the wind-up. Then repeat the sequence from the stretch position throwing 12-15 times. Depending on how the pitcher feels a few less or a few more, different pitches, won’t hurt anything.

For a final tune up the pitcher should call his own sequence of pitches, unless he wants the catcher or coach to call them, and throw to the corners as the catcher moves around. Having a player having a “mock at bat” while in the box will add to the realism, forcing the pitcher to focus.

The pitcher’s mound throwing session should begin with the fastball and end by throwing fastballs. However, it is crucial the pitcher has a feel for his other pitches before the session ends.

Game situation is not the time to try and get the feel of off speed pitches like a change-up or curveball. It is crucial he feels comfortable with these pitches before leaving the bullpen.

If the pitcher is having trouble locating his curveball, don’t throw 10 curveballs in a row, as continued trouble can lead to utter frustration. Throw a mixture, fastball, fastball, curveball, change-up curveball, etc.

The last thing to do before leaving the bullpen is to verify the pitcher and catcher agree on the alternate pitch signal system with runners on base. 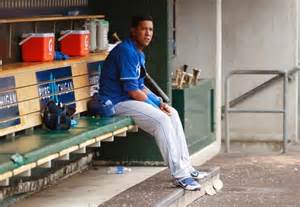 As the pitcher walks to the dugout he will receive last minute instructions and tips from the pitching coach, such as;

6 minutes till taking the mound:

2.   Positive reminders, “You are always dominate when you get ahead in the count”

3.   He’ll probably ask which pitch you feel the most confident in today, as this is a confidence indicator. A shrug of the shoulders vs a strong “all of them” can tell a tale.

Once in the dugout, hydrate, clear your head and focus on the task at hand. For the next couple of hours nothing else matters except what transpires on the playing field.

Things to Think About:

1.   A double-header will create issues if there isn’t enough time in between games for you to use your normal routine. It’s your responsibility to begin your routine, whether the game is over or not, in order to properly prepare to pitch.

2.   When a pitcher is removed from a game it’s important to do some cool-down throwing and/or light dumbbell exercises.

3.   It’s proper etiquette, when removed in the middle of the inning, to root for your reliever and wait until the half of inning is ended before doing your after-pitching routine and icing down.

4.   Perhaps the most important thing to remember as a pitcher going through his warm up routine is: A great bullpen or a terrible bullpen session does not dictate how you will pitch that day.

5.   That doesn’t mean if your arm hurts it’ll stop once on the mound, but the not so curving curveball may begin exploding downward.

Baseball fact: More runs are scored in the first inning of college and pro games than in any other inning. Hmmmmmmmm