Petco Park, located in downtown San Diego, is the home of the San Diego Padres of the National League Western Division, which replaced the former home of the Padres, which was shared with the NFL San Diego Chargers, Qualcomm stadium. The park, Petco, is named after the animal and pet store supplies retailer, which is based in San Diego. 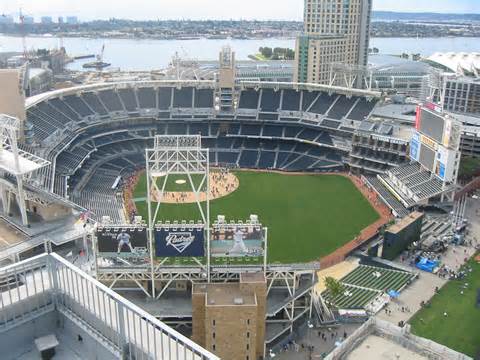 A. Political wrangling and legal questions immediately began to become a problem when a court nullified a ballot proposition which authorized the city to allocate funds for their portion of the stadium financing. Although the voters had approved the proposal once, they were forced to vote on it again.

B. The Western Metal Supply Company building, which was to be razed for the construction, was declared a Historical Landmark, which stopped it being demolished. Numerous court hearings finally decided the buildings only part which was of historical value was the exterior. The building was renovated and included in the stadium’s design ending the legal fuss. 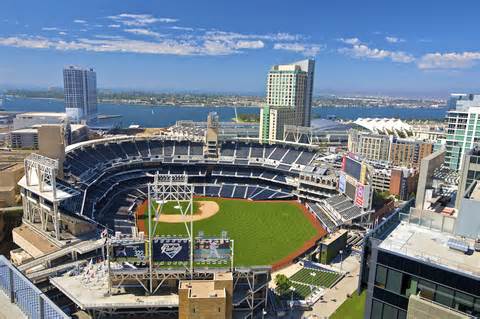 
Petco Park designers went the extra mile in creating a ball park which blended in and represented the natural beauty of the area it was in. The exterior of the facility is Indian sandstone and stucco, All exposed steel is painted white and the seats are colored Blue. The design is to represent the sandy color of San Diego’s cliffs and beaches, the White is to resemble the white sails of the boats on the bay, and the Blue to represent the Ocean.

One unique feature of the park is the location of concession stands and similar facilities. Instead of locating vending areas in the concourse, these facilities, as well as numerous restaurants, cafes, specialty shops and others, are located in building connected to the outside of the stadium. This enables the concourses to be open rather than enclosed and offers a panoramic view of San Diego Bay, Balboa Park, home of the San Diego Zoo, and the city’s’ skyline.

The fore mentioned Western Metal Supply Company was renovated and serves as the Teams’ store, private suites, a restaurant and offers rooftop seats for watching the game. The Southeast corner of the building serves as left field foul pole and is protected by steel angle iron painted yellow. 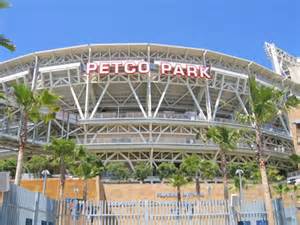 
While construction was being done, as a marketing gimmick the Padres offered bricks for sale which would be placed in the concourse and could be dedicated to anyone.

Soon after this offer, PETA, an animal human rights group which has had several issues with Petco, attempted twice to purchase a brick, but were denied. Undaunted, PETA continued its attempts until they were finally successful. The brick states “Break Open Your Cold Ones Toast The Padres Enjoy This Championship Organization.

“Boycott Petco” The Padres decided to leave the brick in place.