Oakland Coliseum -- The number of names which the O. co Coliseum, originally known as Oakland - Alameda County Coliseum, Network Associates Coliseum, McAfee Coliseum, OverStock.com coliseum, and now commonly referred to as Coliseum or The Coliseum, demonstrates the long and varied history of the facility. 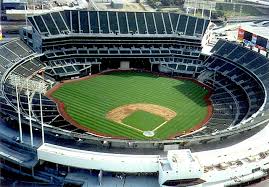 The story of the Oakland coliseum must start with Oakland’s desire to separate itself from its’ neighboring city of San Francisco. The city and prominent business leaders of the area saw individual professional sports as a way to achieve their own identity on a national basis and began making plans to execute such a plan.

In 1962 the Oakland Raiders, of the upstart American Football League, began playing their games in Frank Youell Field, a makeshift stadium in near downtown Oakland, with clear intentions of making Oakland Coliseum their permanent home.

Although football had thrown its hat in the ring first, baseball made it clear as early as 1961 that it wished to include Oakland as a franchise in its Western expansion. League President Joe Cronin, encouraged the coliseum builders to incorporate many of the features included in the brand new Dodger Stadium. 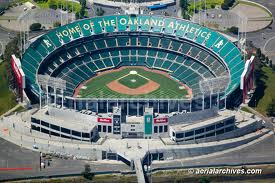 1.The Kansas City A’s moved to Oakland and became the Oakland A’s. In 1972 they began their incredible 3 Straight World Series Championships.

In spite of these and other achievements the stadium was ill maintained and fell into disrepair, most noticeable and degrading for baseball fans, where the crowds continued to reduce, twice numbering less than 1000 fans and once on April 17, 1979 numbered only 653 fans to see a game with the Seattle Mariners.

During this time the facility was nicknamed he Oakland Mausoleum. 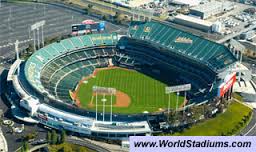 From 1988 - 1990 the A’s were involved in 3 more World Series, winning the 1989 earth-quaked delayed series with the San Francisco Giants, known as the Battle of the Bay.

Despite these successes the decade was one of turmoil for the coliseum and the A’s baseball team.
The Oakland Raiders won Super Bowl XV, then 2 years later moved the team to Los Angeles. A few days after the Raiders announced their move the A’s owner, Charley Finley announced he was selling the team to Marvin Davis, who would move the team to Denver.

Oakland wasn’t going to lose its’ city’s major league status without a fight and refused to let Finley out of the lease. This canceled the deal with Marvin Davis and forced Findley to sell the team to Levi-Strauss and company.


In July of 1991 the Raiders Football team agreed to return to Oakland and the Coliseum in return for substantial stadium upgrades, one of which was the addition of 10,000 seats in the upper deck around the outfield, enclosing the entire stadium and eliminating the 30 year old view of Oakland Hills.

1998 saw the return of the Black Hole which was a large group of fans who banded together and occupied one entire end zone seating area. 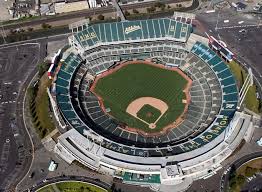 The 2000’s will see the Coliseum become the only major sports facility which continues to be a multi-purpose stadium when the Florida Marlins move to their new stadium in 2012.