Major League baseball lays claim to the “World Series,” but in reality the Little League World Series, is in fact an actual World Series involving teams from around the world who come to compete.

The original event was held in August 1947, and continues to be held in August of each year, included only American teams, and was called the National Little League Tournament, but was renamed to reflect the comparison and baseball feel of the real life MLB. 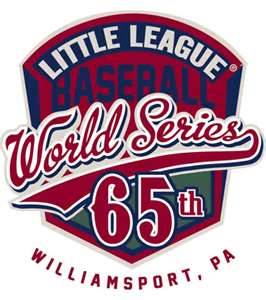 The tournament, which includes qualified 11 & 12 year old youngsters, turning 13 after May 1st and not August 1st as originally set up, is played exactly where it originally began, located in South Williamsport, Penn. USA.

The road to qualifying for the Little League World Series is some what complicated with different rules for different countries and even differences of qualifying between states in the USA, but the road essentially begins with 8 major tournaments, which are sponsored by Little League International, the parent organization.

The first step to making a run for the series is to compose a baseball team of qualifying aged players. Little League organizations from around the world choose All-Star players from within their leagues and these are the players who will compete in qualifying tournaments which include, but are not limited to; 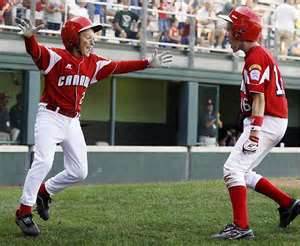 There is no standardized method of how these tournaments must be operated, but rather is left up to the various regions or countries to decide which format they use. Some use Pool Play, Double Elimination and others Single Elimination formats.

Every State in the Union, including Washington D.C crowns a Champion team from the divisional qualifying tournaments, which represent the state in one of the 8 Regional tournaments.

Did I mention the procedure is complicated? Going to the http://www.unpage.org website for a comprehensive break down of each region. 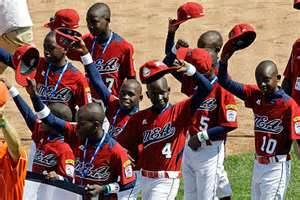 Countries outside the U.S. pick their National Champion representative in varying ways. For instance Little League Canada holds tournaments at the provincial and region levels, which include Ontario, Quebec, British Columbia, the Atlantic Provinces and the Prairie Provinces, and the winners of each of these tournaments compete for the National Championship and the right to represent Canada.

(1.) The competition in the series consist of 16 teams, 8 of which are from the United States and 8 from other countries.

(2.) These teams are divided into 2 separate brackets, the United States and the International bracket.

(3.) The teams are then placed into one of two pools, randomly selected, from within their bracket.

(5.) The top 2 teams, the teams with the most wins, in each pool advances to the semifinals of their Bracket. 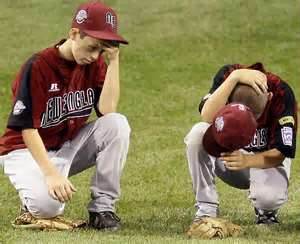 Don't Tell Me They Don't Care

(7.) The winners of these respective games move forward to the championship game of each bracket, the United States or International Bracket.

(8.) The winner of these games becomes the Champion of the brackets, United States & International, and will face each other in the Little League World Series Championship Game.

The winner of this game is crowned Little League Champions of the World.

The Little League World Series, which began in 1963 with ABC televising the championship game, becomes more popular each year, with radio broadcasts, and exclusive tournament coverage shown on ESPN. The number of games televised has increased each year, from the original Championship game, to Bracket play, to Pool play.

The eight regional tournament winners which compete in the United States Bracket of the Little League World Series, as well as the states those regional champions could possibly hail from are as follows:

The eight divisions which compete in the International Bracket, as of the next LLWS in 2013, are as follows: 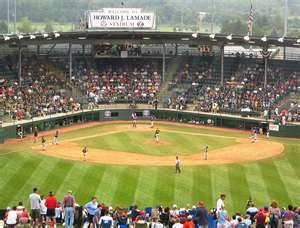 Games of the series are played at one of two venues.

(2.) Or the Little League Volunteer Stadium, which opened in 2001 when the field expanded to 16 teams.

Both fields have symmetrical fences, with a distance of 68.6 m (225 feet) from home plate to each of the outfield positions. That distance had been 62.5 m (205 feet) before 2006, but the usage of composite bats, with their extra performance enhancing qualities, required the distance to be increased.

There is never an admission charge for spectators of the series, however, due to the extremely high demand for viewing sites, stadium seats for the Championship game are reserved for the players and parents of the two competing teams, which are randomly distributed.

This does not preclude anybody from watching the game as Lamade Stadium has a well designed berm located behind the fences, specifically for game viewing and can seat 45,000 spectators.