When you begin teaching Little League Pitching you must give serious considerations of the consequences of beginning the long journey of training a young pitcher on the wrong foot. Many coaches, in their eager anticipation to dump loads of foreign information on a young pitcher, don’t stop to consider the youth’s physical and mental limitations.

I strongly encourage youth baseball coaches to seriously consider teaching and using the Stretch  position of pitching exclusively for youth pitchers 7 - 9 years old. This is not just a personal preference, but rather a conclusion arrived at by monitoring numerous young pitchers and their performances for the first three years of pitching.

It doesn’t take a rocket scientist to realize learning One wind-up at a time would be easier than learning two simultaneously. When I say learn, I’m not only including the brain’s memory, which remembers which steps come in which order, but also the body’s pitching muscles, which also have a memory retaining capability of each muscle should react at each stage of the pitching process.

As with most things we learn in our life, it is learned through repetition, performing the same task, reciting the same poem or singing the same song over and over again, until it’s engrained into us, which allows us to perform without a conscious effort.

Changing from the full wind up to the stretch position denies that full time repetition, which confuses the muscle memory. I am not suggesting a pitcher can not learn both wind-ups, as that is strictly not true. 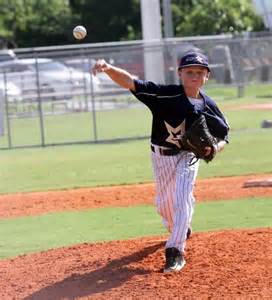 As I remarked earlier, this is not a rock solid “must do“. I know coaches who feel the simultaneous learning of both wind ups are very important and can present a very impressive argument for their method. --Little League Pitching

One possible issue which may provide incentive to use the stretch position only is I found my pitchers, and most of those I monitored, had better and more consistent control when throwing from the stretch. As this wind-up is simplistic, they seemed to concentrate more on their grip and pitching mechanics than their windup.

Fluid mechanics of pitching. You notice I bolded the word Fluid, as Pitching motions should never be mechanical, like a robot’s movements or herky jerky, with any pauses or unnatural movements. A smooth fluid motion, with every part of every motion having a purpose. 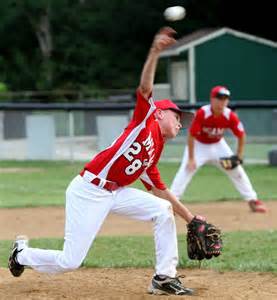 Keep Fielders Awake By Pitching At A Steady Pace -

Let’s begin our process of teaching our young pitchers the
Perhaps unexpected, physical aspects of pitching do not come first in the series of pitching elements, but rather the Mental aspect of pitching is the very beginning.

Notice how some major league pitchers work very quickly, getting the ball back from the catcher and nearly immediately go into their wind-up, while others nearly lull you to sleep between pitches, moving as if they barely had enough energy to stand up? Little League Pitching

Pitchers, even very young ones, need to develop a routine between pitches which he does every time, as this routine automatically focuses the mental and physical aspects of preparing to throw the next pitch. The quickness or slowness of the routine normally mimics the pitcher’s personality.

That’s why you’ll see a batter continually stepping out of the batters box between pitches when he’s facing a pitcher who works quickly. It’s to disrupt his mental and physical focus by making him slow down. 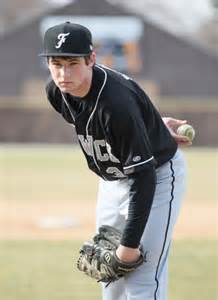 The Set-up or Stare is a brief period where a pitcher completely stops and visualizes what type of pitch and where he’s going to throw the pitch, as this helps set his muscle memory into action. He should grip the ball in the glove the exact same way every time, holding not squeezing the ball with the front two fingers, while staring at the catcher’s mitt, visualizing a quarter in the mitt’s pocket, as his target not the entire mitt. This maximizes focus.
Little League Pitching

While standing, legs apart @ 3 feet, the pitcher places the side of his rear foot ( right foot if a righty …left foot if a lefty ) against the pitcher’s rubber. Some may want to bend over slightly, others stand more erect, doesn’t matter.

They begin their focus by staring into the catcher from this position,taking a deep breath move the lead leg back towards your back leg and become set. The distance between the legs at the set position is dependent on what’s comfortable and natural for the pitcher. The lead leg does not have to be in an exaggerated bent position, but never locked straight. 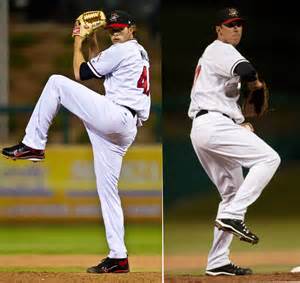 At the same time your bringing your lead leg backwards, you should bring your hands together, chest high a couple of inches away from the chest. Pause and locate the quarter inside the catcher’s mitt. Lift your front leg upward with the knee stopping about chest high.--- Little League Pitching

*** Balance is critical at this stage. A good exercise is to have the pitchers practice holding this position for at least 5 seconds or longer at a time. This will accustom the body to the position and make balancing second nature. ***
---Little League Pitching

As the lead leg goes forward and downward the hands begin to come apart, and the left arm will open and point homeward, the right arm will extend backwards toward second base.

As the lead foot lands on the ground the shoulder and pitching arm should be coming up in a L at @ a right angle to the head. This is when the hips will explode through the zone, twisting and uncoiling like a spring, releasing maximum power for speed and velocity of the pitch.

The lead leg should stride out and extend as far as possible while still remaining comfortable. It should land on an imaginary line that extends from the rear foot to home plate.
If the foot lands too far on the right side of this line, the shoulders won’t be able to fully open and the pitcher will be forced to throw across his body, reducing velocity and putting undue stress on the shoulder.

If the foot lands too far to the left of the line, the shoulders will open too soon which will reduce velocity and control.--Little League Pitching

A good drill to learn proper landing is to have the pitcher take his normal stand next to the pitching rubber. Draw a line in the dirt or chalk a line if on pavement from the rear foot to the plate. Have the pitcher practice his pitching motion paying special attention to where his foot lands in relation to the line. 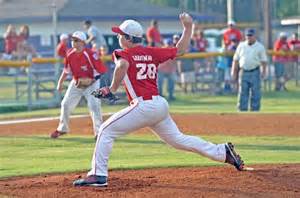 Here’s something that might blow your mind. The pitcher does not push off the rubber toward the plate. The rear leg is for balance as the hips move forward, turn and explode through the release zone. The power and velocity comes from the hips in conjunction with arm speed, not the rear leg pushing forward.--Little League Pitching

All pushing off the rubber will do is throw the pitcher off balance wrecking his entire delivery and creating chaos with his control. So next time you hear an opposing coach yelling at his pitcher “to push off and follow through” just smile to yourself.

The rotation of the hips is what lifts and brings the rear foot forward. Should you see your pitcher dragging his rear foot …he is losing power. There is something, minor, that is stopping the hips from fully exploding through the zone, or else his foot would be lifted as it is brought forward, but it needs to be corrected a.s.a.p.

Completely finishing the pitching motion is critical. The ball should be released out in front of the head, and the wrist should snap forward as the ball is released from the hand. The throwing arm should continue across the body ending around the pitcher’s plant knee. --Little League Pitching

*** Repetitive**** It’s important to finish the follow through as the energy exerted flows through and out the arm instead of slamming the brakes on coiled muscles, a good way to incur injuries.--Little League Pitching