How to Throw a Sinker:

I like to teach How to Throw a Sinker as it's easy on the arm and a Ground Ball Can Not Go Over the Fence For A Home Run.

A Rather a simple statement with HUGE implications for a pitcher.

To the point … “The less fly balls a pitcher allows … the less chance he’ll get hurt by the Home run, or long ball as it‘s called. How can a pitcher accomplish this? 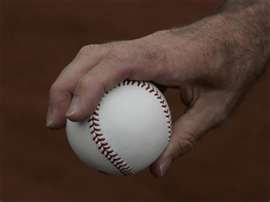 By keeping the location of pitches Down in the strike zone, it will greatly reduce fly balls because the hitter must drop the head of the bat through the hitting zone in order to get under the ball and provide lift. Not that this is impossible, of course it’s not, but it’s harder than just making contact … and that’s what most hitters concentrate on accomplishing.

A pitcher who can consistently keep his pitches low in the strike zone, while moving it in and out, will be a successful pitcher.

Pitch Selection How to Throw a Sinker

The other method of inducing ground balls is pitch selection, and there’s no pitch better for accomplishing that than the Sinker.

1. A properly thrown sinker will move downward, a couple of inches, which makes it a good strike out pitch, but more importantly it moves downward enough to induce the hitter to hit the top of the baseball with the bottom portion of the bat, which will drive the ball downward into the ground. 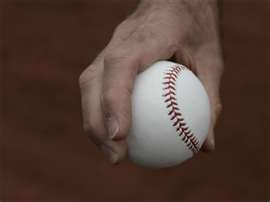 3. Due to the rotation and movement created by the way a sinker is thrown, the ball tends to be heavy, that is … it doesn’t explode off the bat the way a fastball tends to do. It sounds more like a  “Thud”  instead of a  “Crack.“  This not only produces ground balls, but restricts the distance a fly ball travels.

There are a few different methods of gripping and throwing a slider.

Method 1 - How to Throw a Sinker

Begin your grip by placing your thumb under the ball holding the smooth part of the ball between the two seams.

Position your first two fingers on top of the ball, gripping the two seams, similar to a 2 seam fastball, it’s important your hand stay on Top of the ball all the way through your release and finish motion.

If your hand ends up sideways as you release the ball, the ball won’t sink, as Friction creates the sinking movement of the ball, and the release and hand positioning is what creates the amount of friction. 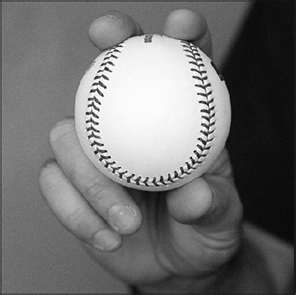 Method two is identical to Method 1 Except instead of gripping the two seams of the ball, move your finger to the right of the seams, straddling the outside seam. This method will help create additional movement as the pitch approaches the plate.

Both Methods How to Throw a Sinker

Both methods require the same arm, hand and release mechanics, especially the follow through of your arm action.

After releasing the ball, as you complete your follow through, your hand should be positioned to where your Thumb should nearly graze your lead leg’s thigh. If your pinky finger is facing your thigh, the ball will not sink, but rather run straight.

Most pitchers will apply more pressure with their Index finger than the Middle finger, this creates a sideways spin and downward movement. Experimentation is the best way to master the pitch.

*** 1. Remember: The sinker, which can be substituted or can supplement your fastball, is a few miles an hour slower than your normal fastball.

2. The Sinker is a good pitch for youngsters to learn because of the way it’s thrown, there is NO undue stress or strain on the arm, elbow or shoulder, yet they are throwing a pitch which gets movement without trying to throw a curveball. ****

How to Throw a Sinker to Learn to Pitch