Hitting Drills is a pretty broad term which implies every drill requires actually striking the ball, either while moving or stationary, which is Not always true.

Some of the best, especially elementary hitting, are performed without hitting the baseball, referred to as Dry Runs or Shadow Swings. This type of drill teaches the proper mechanical and swinging sequence long before actually trying to hit the ball. Let’s look at some training drills.

Hitting a moving baseball is a very technical issue involving many simultaneous body movements. In order to learn a proper swing, which you’ll never consistently hit the baseball without a good swing, one should start out slow and basic. 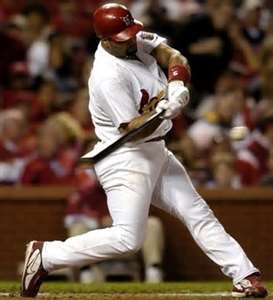 Leading With The Hands

Explaining hitting will sometimes sound like an exercise in counter dictions, such as bat speed can only be increased by strengthening the middle core, and the hands are what’s used to speed the bat through the hitting zone and hit the baseball. Which is Right? Both.

Sometimes it’s important to only learn the immediate skill and not worry how it all ties together in the over-all scheme of things. Such is learning to keep your hands inside the baseball. There is a very simple, yet very effective drill for practicing this skill.

(1.) Have a player or coach kneel a few feet to the side of the hitter;

(2.) The player soft tosses a ball to the hitter; 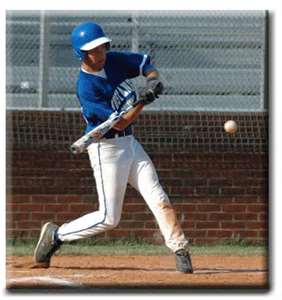 What this drill does is teach the player to allows lead with his hands to the ball when swinging, which is critical to powerful and consistent hitting. Perform this drill until the player can hit the ball with the knob of the bat 9 out of 10 times.

How the Hands Work:

We teach players the knuckles of their hands should form a Knocking knuckles, lined up perfectly, when gripping the bat. We sometimes fail to explain why and, although I’m as guilty as the next guy, I feel that’s a mistake. Our players are not being trained for the blind obedience required of a soldier and if they can understand why and how something works, they’ll be more inclined to mimic it every time.

The bottom hand, the hand with palm facing down, is used to Pull the bat through the hitting zone, keeping it close to the body. Using a small bat, broom handle or whatever, as long as it’s light enough to be held and controlled with one hand, have the player slowly swing the bat with his lead hand only. He’ll see how this hand Pulls the bat.

Then switch to the top hand, palm facing up, which is used to Push the bat through the hitting zone. Again, have the player hold the bat with his top hand only and slowly swing the bat, seeing how this hand pushes the bat. 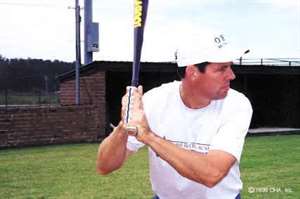 Have the player hold the bat in his normal grip, then have him separate his hands by sliding the top hand up the bat handle 2”-3” inches, no more or else it’ll lock his wrist making it impossible to snap the wrist. Have him take a few slow swings watching how his hands work in unison, pulling and pushing the bat.

While we’re discussing hands, now’s the time to remind the player(s) all hand strength is produced by the fingers only, as there is no strength in the palms of the hand. Have them try to pick up any object without using their fingers, or hold onto an object with the palm of their hands. Why is this important? Because they need to know the fingers and the wrist have the strength which produces the bat speed and squeezing the handle of the bat like you’re trying to wring it’s neck accomplishes nothing positive and is a waste of energy.

How to Use a Bat:

This might seem like a pretty silly question but, you know how to ride a bike, but can you actually identify what every part of the bike is for? Same for the bat.

The bat handle, which includes the knob at the bottom, serves as the place to properly and firmly grip the bat. It is also the part of the bat which should lead the way towards the ball as the swing begins. 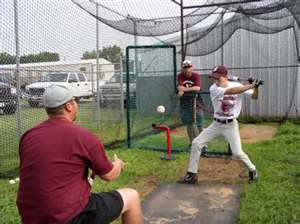 Preparing To Throw The Knob At The Ball
Hitting Drills

The bat shaft or upper handle of the bat should actually be used for nothing as far as the hitter is concerned. Due to it’s taper, to reduce bat weight, it is not designed to hit the ball and balls striking this part of the bat will either break the bat, or result in a feeble ground ball or fluke Texas league line drive. Chances are slim balls hit here will result in a safe hit.

The barrel of the bat, also referred to as the Business end of the bat, is where the Sweet Spot used for hitting is located. Each bat is a little different as to where the sweet spot is exactly located and composite bats are much different than wooden bats, much more forgiving of bad contact.

Now the player knows the two important sections of the bat and can concentrate on doing whatever it takes to bring these two pieces into unison. 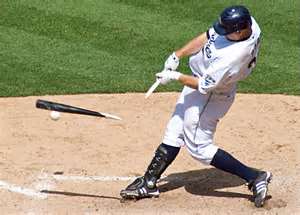 Ball Hit Off the Handle

Sometimes we encounter a player with a mechanical flaw in his swing which is causing him to not be able to hit the baseball either consistently or with power. That’s when the coach has to reach deep into his bag of tricks and find a drill which will help correct the flaw.

One such issue is the problem of batters stepping out too soon, more familiarity known as stepping into the bucket. This habit, and don’t ask how it started because if you knew you’d have stopped it before it became a problem, completely destroys the batters ability to hit the ball by…. 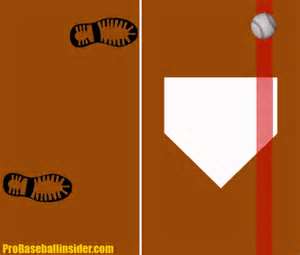 (1.) Results in not being able to reach any pitch on the outside of the plate;

(2.) Forces the shoulders to fly open which pulls the head off the ball;

(3.) Arrests any power produced should the player make contact and etc, etc.

One, have the batter close his stance, which means placing his front foot slightly in front of his rear foot instead of parallel. When the pitch is on the way, the batter essentially still steps in the bucket, but by closing his stance he is now stepping towards the pitcher instead of away. His head remains forward so he can see the ball and he can cover the entire plate with his bat. 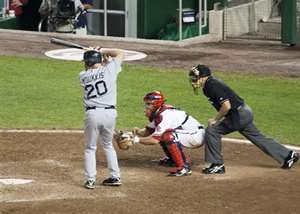 Two, sometimes a player just can not alter his stance to a closed position as it’s just too uncomfortable regardless of how hard he tries. In this situation force the player to raise his heel on the back foot as he awaits the pitch. It’s not impossible, but it’s darn difficult to step in the bucket with the rear heel lifted.

This approach should not only stop the steeping in the bucket, but will also improve the player’s ability to rotate his hips and pivot on his rear foot, as well as shortening his stride eliminating any lunging at the ball.