Foul Ball Communication is important as a baseball field is divided into foul ball and fair ball territory, and depending on where and how the ball is hit, depends on whether the batter is out or not, a caught fly ball in foul ground, an out, a ground ball, is counted as a strike or nothing at all.

In other words fly balls are treated as if they were hit into fair territory, while grounders are not, which brings us to the subject of How a Catcher is to field a pop fly foul ball, in which the discussion usually centers around technique and fielding specifics, which is good as that’s the skill information you’re trying to teach, but sometimes little tips are lost in the big picture, with devastating results. 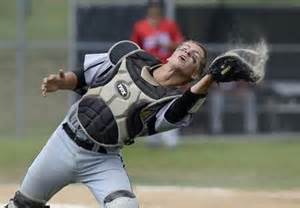 Foul Ball Communication - Harder For The Catcher To Field

I’ve found one such much overlooked tip, is the importance of  Foul Ball Communication between players, which it’s important to realize just because the fly ball is coming down in foul territory it changes Nothing in the need to communicate with one another.

In reality, it actually increases the importance of good communication because there is limited territory between the base lines and the “Out of Bounds” whether it be stadium seats, a wall, netting or a fence, which could pose a safety issue. How many times have you witnessed a catcher fall into a dugout attempting to catch a foul pop up? 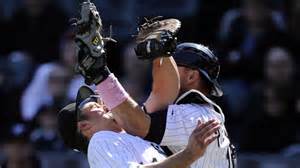 As a number one basic Rule Of Thumb, unless the ball is fouled backwards, straight up, or where no other infielder is unable to reach the ball, it is best an infielder other than the catcher, catch the ball.

The reasons for this “Non-written rule”  are simple.

(1.) The infielders’ glove, including the first base mitt, is by nature of its design and intent, is better suited to catch and maintain control of a baseball than a Catcher’s mitt.

(2.) The infielder is approaching the ball from a side angle of vision, which is much easier to gauge depth perception, which reveals if the ball is fading one way or the other, than the catcher looking straight up towards the ball, which is creates issues detecting wind blown changes of fall.

Let The Infielder Catch The Ball If Possible. 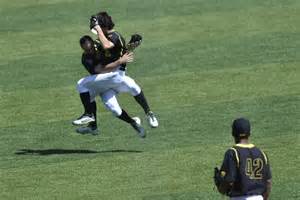 Good ball players never assume anything … they go full out to catch the ball themselves and unless called off, will continue to give chase. Which brings us to our next issue or tip.

There are clear cut Rules pertaining to

(1.) an outfielder over ruling an infielder on a fly hit between them, or

(2.) the center fielder  being the general and final authority on who catches the fly in between outfielders,

However, there are no clear cut rules on infield fly balls in foul territory, because of the hundreds of unpredictable variables which affect the play, therefore common sense must prevail.

One player may be closer to the vicinity the ball is coming down in, but is moving backwards, when another fielder, farther away, but coming in on the ball is actually better positioned to catch the ball and must call the other fielder off.

One quick fielding tip for catchers.

A high Foul, hit straight up and back behind the plate, Will Tend To Fade Backwards Towards the Infield.

Have you ever seen a catcher do everything procedure wise, perfect, and while standing under the ball waiting to catch it, suddenly start back peddling only to have the ball fall behind him, while he stumbles and falls? 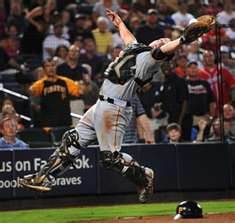 The reason that happened was the catcher was positioned directly under  the ball as it descended, which makes it difficult to detect the fading until too late, and because the ball drifted towards the infield, falls 10’ behind him.

Catchers must remember this little tip and it also validates the “unwritten rule” an infielder should catch the ball if possible, as the infielder would be coming in to catch the ball, instead of going backwards, which is always the easier play.