In teaching drills for baseball it’s a good idea to always remember the K.I.S.S (Keep It Simple Stupid) system. The execution and repetitiveness of  Baseball drills is the only method you can use to teach and elevate your players’ skill levels, and there’s literally 100s of them which can be employed.

I’m going to teach you 5 specific drills you can immediately incorporate into your practices which will help develop fielders’ arms, increasing velocity and accuracy.

1. Wash Pan/Trash Can Drill and Drills For Baseball

It’s only natural when training young outfielders, to concentrate on the skills of catching fly balls, taking the proper angle to ground balls, and so on, but we sometimes forget to train the player what and how to do with the baseball after catching it.

Drills for Baseball - Trash Can Drill

This Drill is designed to specifically increase the accuracy and velocity of outfielders’ throws back into the infield.

The drill requires a metal wash pan, the size you give your dog a bath in, or in lieu of the wash pan, a new trash can, clean and metal.

(1.) Being by positioning your players in the outfield, and there are various methods of performing the drill, place All the players in one field (Left Field) then move them to Center then Right, or divide them into all 3 fields and rotate the players, which what I recommend, as it seems to make the drill go faster between each fielder’s turn.

(2.) Locate the tub or trash can on its side, at approximately half way between home plate, the pitchers’ mound and the foul line, with the open end facing the field you’re hitting to. You can later use this identical drill to practice throwing to a specific base, but for today we’ll use the generic position of the cut off man.

The tub or can won’t move to adjust to an off line throw like a player would, which creates increased focus and concentration by the outfielder to pin point their throws instead of just being “in the area.”

We’ll now move to our infielders. This drill is designed to have your infielders develop quicker hands and a smooth quick release after making the catch. Sometimes we as coaches concentrate so much on the mechanics of catching the ball, we tend to brush over the fact there is a need to teach quick hands in getting rid of the ball, especially in the infield.

For this drill you’ll need:

(2.) Numerous baseballs, in order to keep the drill moving … 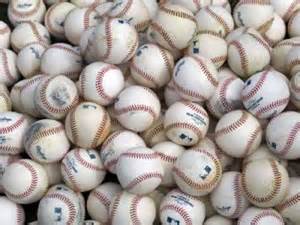 Drills for Baseball - More the Merrier

There are two variations of this drill depending on whether you want to hit the ball from home plate, or throw it from the pitching mound. I found the pitching mound to work much better and intensifies the drill, but it’s the coach’s choice.

Position your players at the shortstop area and instruct them that the goal of the drill is to field a ground ball and throw it to first base, hitting the metal bucket, within 3 seconds… 5 seconds if hitting from home plate.

(1.) From the pitching mound area, hit or throw, I prefer throw because I can keep the speed of the ball constant, a ground ball at the player.

The first few times through the line there will probably be a lot of miscues, such as missing the ball, dropping it as they pull it out of the glove, badly missing their target and this is perfectly normal.

(2.) You’re increasing the intensity and accuracy as their vision, mind and body must quickly work in unison to locate the target.

(3.) You’re teaching them How to Handle Pressure, the type of Must Make Play pressure which they’ll definitely encounter as they play.

(4.) You’re teaching them, by using the short target of the metal pail, to throw low in the event the throw is off target, your first baseman has the opportunity to scoop the ball or catch it on one bounce.

Younger players, Tee Ball through 6-7 years of age, have a tendency to throw only with their arm, and even if they may take an exaggerated high step with the proper leg, they simply plant their foot back down and still throw with only their arm.

For velocity, accuracy and to prevent arm injury, the player must be taught to follow through with his body as he throws, and this is a very simple drill, very basic easy to perform drill, but it establishes good follow through throwing mechanics.

Drill Set Up. Again the coach has the discretion of how many players are involved at one time.

(1.) Place an object, orange cone, equipment bag, whatever on the ground.

(3.) The first player, throws the ball to the player facing him, but as soon as he throws the ball he’s to run to his ..Left as fast as he can to where the cone or other object is.

(4.) This drill is teaching by deception because by running to their left, as they complete their throw, teaches them the body movement of following through with their throws.

(5.) By making it a speed game by having them run as fast as they can,  eliminates any throw… pause… then run, which still allows for No follow through. They will throw and begin running, more or less in the same motion, teaching follow through in body and arm motion as well as direction.

*** You’ll of course inform your players of the real skill being taught, but being of such a young age, they understand the concept of run … better than follow through.

*** For a left handed player he must run right instead of left in order to follow through.

4. One Knee Drill and Drills for Baseball

As a coach it’s your responsibility to be vigilant of your players’ health & safety, therefore it’s important in this drill, and all other sequence drills are Performed In Proper Sequence or else severe arm injury could occur. 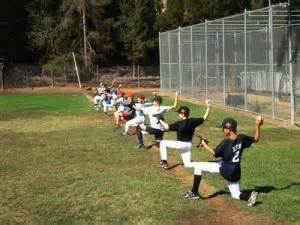 The reason this drill is so successful is that it eliminates the lower body from the throwing process, which places all the stress on the upper body.

(a.) Split the team into two units, paired up and facing each other.

(b.) The players are to kneel on the knee opposite their throwing arm … Right Handed … Left Knee, lefties opposite, spaced 5-7 yards apart.

Have the players toss the ball back and forth for 3 - 5 minutes, then move 5 yards farther apart and throw for 3 - 5 minutes. The distance and time are dependent on the coach, but remember what time of year it is and if it’s early, excessive throwing can result in sore arms.

I’m often asked, whether it be from fielders or pitchers, how to strengthen their throwing arm. That’s not to say build muscle, lifting dumbbells cures that problem, but rather increase the distance and velocity one can throw the baseball.

Sadly to say, or maybe glad to say depending on how you look at it … There is only one method to increase arm strength and that is to Throw in ever increasing increments, the Long Toss method. 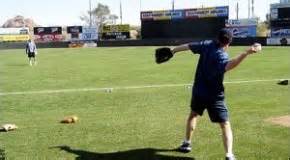 (a.) Begin the drill by splitting the team, pairing them up with the two lines facing one another, spaced at 30 yards apart and throw for 3-5 minutes

The  Long Toss is the only way to lengthen and increase throwing arm strength and I encourage every coach to push the drill, but be wary of weather conditions, time of season and player complaints, if any.

Building a strong throwing arm is not an overnight ordeal, just as body builders over time must continually lift heavier weights to increase their muscle mass, ball players must throw longer distances in order to build and lengthen the muscles in their throwing arm and shoulder.

We’ve covered a lot in these drills involving fielding, throwing, mechanics and strength building. Incorporate these into your practices and see the difference in team performance.