Dodger Stadium been the home of the Los Angeles Dodgers, of the National League Western Division, since 1962. The stadium is currently the third oldest in major league ball park, behind only Wrigley Field and Fenway Park.
Dodger History:

During the early and mid -1950s, Brooklyn Dodger owner, Walter O’Malley attempted to build a Domed Stadium in the New York borough of Brooklyn, but was unable to reach an agreement with city leaders on acquisition of the required property. 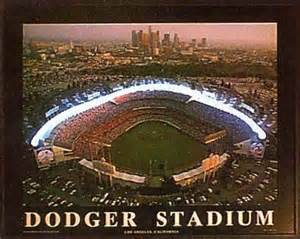 Meanwhile, in the early 1950’s land, known as Chavez Ravine, was being bought or taken by right of eminent domain, by the City of Los Angeles with funds acquired by the Housing Act of 1949. The intended use of the land was to build Elysian Park Housing Project, which included 2 Dozen 13 story buildings and 160 two-story town houses. This project lost favor in Los Angeles and the ground was purchased, at an extreme discount, from the Federal Housing Authority, with the pledge the ground would be designated for public use.

In 1958 the Dodgers bought the property from the city, began plans to build a baseball stadium, and moved the Dodgers from Brooklyn to Los Angeles, where the team played 3 years in the Los Angeles Memorial Coliseum, which had a 90,000 seat capacity. 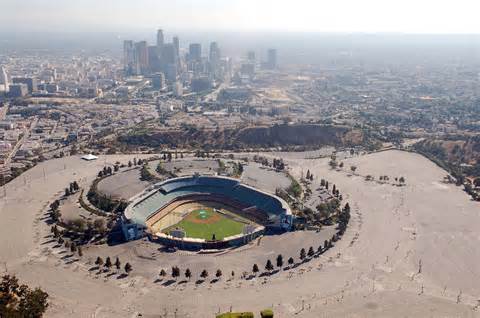 The stadium offers numerous unique features, many which have been incorporated into stadiums built afterwards. O’Malley was impressed with the dugout level seats behind home plate he saw in Tokyo’s Korakuen stadium during the team’s goodwill tour of Japan in 1956 and incorporated the seats in Dodger Park.

Dodger stadium’s wavy roofs over each outfield pavilion and the top of a 10 story elevator shaft, located behind home plate, of the upper seating level, with its Dodger Logo, are two unique features.
The stadium parking lots, which are quite ample, are terraced in order to place season ticket holders parking at the same level as their seats eliminating the use of ramps once inside the park.

Much forethought was taken to build the stadium as Earth Quake proof as possible, a desirable option for California, and it has withstood several large earth quakes with only minor damages. 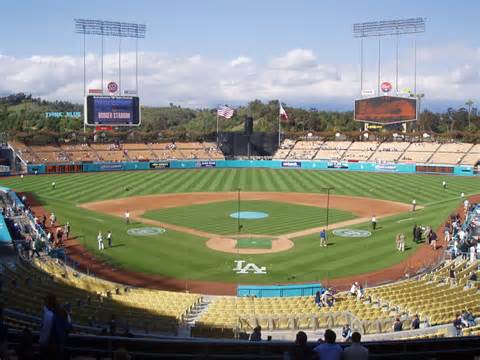 Location and No Drainage:

Dodger Stadium is located in the Los Angeles community of Chavez Ravine in Sulfur Canyon. The park overlooks downtown Los Angeles on the South, Elysian Park, with its green tree lined hills to the North and East, and the San Gabriel Mountains from beyond the outfield pavilions.

Due to this location and the historical dry summer months in Southern California, rainouts are very rare, eliminating the requirement for extensive underground drainage systems. Prior to 1976 the Dodgers experienced only 1 rainout, against the St. Louis Cardinals on April 21, 1967.

Dodger stadium is the Only, with the exceptions of new ball parks, which has never changed the seating capacity of the park. California has a Conditional-Use Permit pertaining to the stadium’s capacity which limits it to 56,000. Any time seats are added to the facility, the same number of seats are subtracted from another area in the stadium. 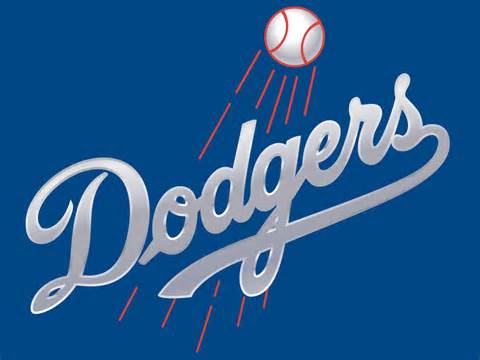 Pitcher Friendly Or Not?

For the most part Dodger stadium is considered a pitcher friendly ball park with power alleys being 380 feet, a pretty good drive. In order to make the park more even for hitters, they moved home plate 10 feet closer to center field, bringing all the dimensions in. However, this 10 foot move also increased Foul Territory by 10 feet, which resulted in many formerly out of play foul balls, now being caught.

Another factor which voids a pitchers’ advantage are late afternoon games. As the sun sets the moist ocean air rushes in and cools the air, making it denser and adds moisture to the normally dry air, which reduces the distances balls travel.