The act of throwing different baseball pitches, or any baseball for that matter, over handed is a unnatural act as the muscles are not designed or intended to be used in a repetitive over hand motion, which is why a softball player, although throwing equivalent to a 95 mph fastball, can literally pitch day after day with no ill affects, as her wind up and delivery is a natural motion for the body.

I’ve stated this fact before, but I can not stress the importance of learning proper pitching mechanics enough, for if just throwing over handed subjects the arm to injury, throwing wrong will obviously increase the danger many fold.

I’m going to teach you the proper grip and pitching mechanics, and even throw in some strategy for maximizing the most widely used pitch in baseball …. The Fastball.

To throw a four seam fastball you begin by gripping the baseball across the seams with your front two fingers, your thumb is placed under the ball in the middle, nearly directly in between the top two fingers.

This will be your standard 4 seam grip, actually no different than the grip a fielder uses in order to eliminate any sailing or tailing of the ball when they throw it.

You should Never squeeze the ball, applying pressure in order to create movement comes later, rather hold it as if it were an egg or a crystal ball, being sure there is a small gap between the baseball and the palm of your hand.

Don’t tuck the ball tightly into your palm as the palm has no strength to apply pressure for movement, but rather restricts your throwing motion and velocity. Control the baseball with your fingers and thumb only.

The four seam fastball historically produces the pitches with the most velocity, thus the fastest variation of the fastball grips, but it is also the straightest, which means the pitch relies more on speed than movement to make the hitter miss.

In order to throw a two seam fastball hold the ball with the front two fingers directly on line with the baseball’s seams, placing the thumb under the ball directly underneath the top two fingers. Again, not squeezing the baseball and leaving a gap between the ball and the palm of your hand. 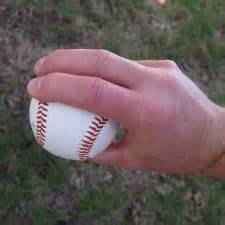 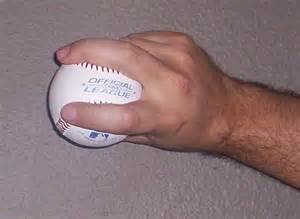 Although the two pitches are mechanically thrown in the identical same manner, they will react differently because of the varying grips on the seams of the baseball.

Assuming you have mastered the grip and control of the two different fastballs, a somewhat big assumption, but I have full confidence in you, so let’s assume it, now you must develop a strategy of how to use them and decide when you want to throw each individual pitch.

For our example, we are capable of throwing these two variations of fastball only, we throw no other type of pitch. 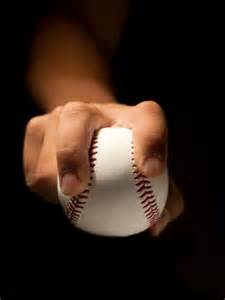 (1.) Should you possess an over powering arm, I would suggest you throw your four seam fastball, because of it’s increased velocity, to get ahead of the batter in the count. On an 0-2 , 1-2 or 2-2 count I’d throw the two seam fastball, which the movement and variation of speed, although slight, is an excellent way to provoke a tense, 2 strike hitter to chase.

On the other hand, should you be an over powering pitcher and it’s early in the game, 1st to 4th inning, I’d be inclined to throw nothing but four seam fastballs and save my two seam until later in the game for a possible, “game Saving” strike out.

Hitters tend to figure a pitcher out after seeing him throw a few times, which is why sports commentators will note the pitcher, although in command, must now face the lineup for the third time, as it will be harder for the pitcher to get batters out.

Should you be able to introduce a different pitch during the late innings, the hitters are baffled again trying to handle the different speed and movement of the new pitch.

(2.) Should I be a pitcher of average speed and velocity, my strategy completely changes from the over powering thrower.

I would only throw the four seam fastball as a <I>Display</I> pitch in order to set my two seam fastball up. In other words, I would rarely throw the 4 seam fastball it for a strike, because my speed is not great enough to throw it past hitters and the flat line offers a tempting target to attack, therefore I’d throw it either outside or inside off the plate at least two to three inches.

Although These Grips Are Nearly Identical ... The Slightest Difference In Finger Pressure Will Make The Ball React Differently.

This is just one example of developing a pitching strategy.