Comerica Ball Park, located in Detroit Michigan, and home of the Detroit Tigers, opened in 2000 replacing Tiger Stadium which had been the long time host of the Tigers. 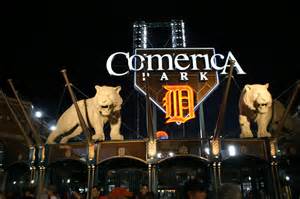 What’s In A Name?


Comerica Bank paid 66 million dollars over 30 years for naming rights to the stadium, but fans sought to find a nick name for the park to endear it to Detroit fans. The term CoPa was bantered about, but failed to catch on. Most people simply call it Comerica.

However, Comerica National Park became a nickname which team management was somewhat dismayed to hear catching on with the public. Tiger stadium had been a hitter friendly ball park and fans had become accustomed to that style of play, but Comerica Park was huge in relationship to the former park, becoming a pitcher friendly park.

Although some baseball people liked the large park dimensions, it was agreed the left field fence, in particular, should be moved closer to home plate. Prior to the beginning of the 2003 baseball season, the left center field fence was moved from 395’ to 370’. This move created a vacant area behind the left field fence, which 2 years later was converted to the bullpen, which allowed 950 additional seats to be added in right field.

Obviously the Tiger theme was extremely important to incorporate into the ball park. One 15’ tiger statue stands outside the Main Entrance, 8 others are positioned throughout the stadium including 2 which prowl the left field scoreboard, whose eyes light up after a Tiger home run or victory, and 33 Tiger Heads with lit baseballs in their mouth adorn the exterior.

Keyhole is the nickname for the distinctive dirt path between the pitching mound and home plate, which had been standard design in old ball parks, but the only other one is in Chase Field in Phoenix.

Keyhole is the nickname for the distinctive dirt path between the pitching mound and home plate, which had been standard design in old ball parks, but the only other one is in Chase Field in Phoenix.

The Northeastern corner of the stadium houses a Ferris Wheel with 12 cars designed like baseballs.

The Northwest corner of the park houses a carousel which have Tigers instead of horses and patrons are welcome to ride for free.

There is a huge water fountain, referred to as Liquid Fireworks, located in center field which is set off anytime the Tigers score and in between innings. GM held the original sponsorship and naming rights from 2000 - 2008, but financial troubles forced GM to not renew their rights.

Instead of placing the naming rights to the fountain out for bid, the stadium kept the GM logo and added a Ford and Chrysler logo along with the statement “The Detroit Tigers Support Our Automakers.” GM renewed their rights in 2010 renaming the fountain Chevrolet Fountain.